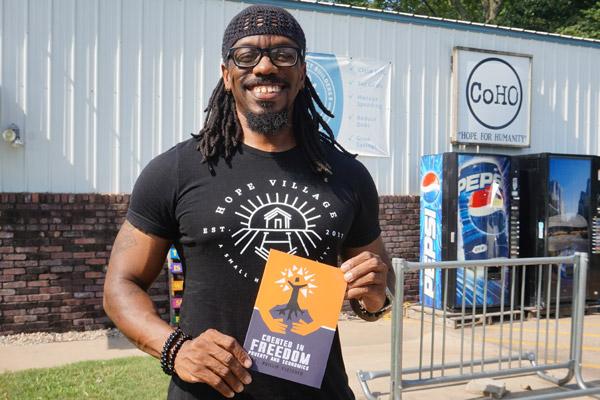 Aprille Hanson
Dr. Phillip Fletcher smiles outside his office at City of Hope in Conway, holding his new book, “Created in Freedom: Poverty and Economics,” the first in a three-part series.

Aprille Hanson
Dr. Phillip Fletcher smiles outside his office at City of Hope in Conway, holding his new book, “Created in Freedom: Poverty and Economics,” the first in a three-part series.

Where to get it

The book is available as an e-book or paperback at his website, phillipfletcher.org, Amazon, Barnes and Noble and Apple. The second and third books of the series, the dignity of work and human dignity, will be published next year.

CONWAY — Dr. Phillip Fletcher, founder and executive director of The City of Hope Outreach (CoHO) in Conway and recent convert to the Catholic faith, explores the idea of freedom based on the truth that we are created in the image and likeness of God in his book “Created in Freedom: Poverty and Economics,” the first in a three-part series released in June.

In the book, he describes the series of essays as “love letters to the poor in America.”

“I thought it was important to get out to people who are working with persons in poverty, but more importantly, those who experience poverty an opportunity to learn some new ways at looking at improving human flourishing,” Fletcher said.

The compact book, written with short attention spans in mind without compromising on the depth of the issues, drew from his Ph.D. dissertation focused on theistic personalism, inspired particularly by Martin Luther King Jr. and St. John Paul II. It focuses on isolation, participation, invitation, economic environments and other areas that impact poverty.

It is a reality that Fletcher has both lived, as the U.S. Army veteran was once homeless for a time, and through his work the past 11 years with CoHO. The Christian nonprofit focuses on holistic community renewal, with several initiatives in three different low-income communities in Conway, and also in Mitchellville and Eudora, in Desha and Chicot counties: educational opportunities, workforce development, CoHO Academy for youth, The Hope Home of transitional housing for men and CoHO Garden.

They are working to break ground next year on Hope Village, a small home, mixed-income community to primarily house veterans, homeless and families.

Fletcher begins “Created in Freedom,” with Genesis 1:27, and continues throughout the book with religious themes, literature and hip-hop lyrics as a starting point for essays, including the late Tupac Shakur, “Did you hear about the rose that grew from a crack in the concrete?”

“Economic freedom will cost us something,” Fletcher writes. “If we want to see more persons in poverty blossom like roses, the institutions, policies and stereotypes responsible for the obstacles will have to be broken.”

In working with men, women and children the past 13 years who live at or below the poverty line, Fletcher said he saw a need for more exposure to the “movers and shakers” in society. If they are isolated, it puts a barrier to their knowledge, access to resources and the ability to communicate effectively in certain arenas. For Black Americans, an example of isolation is the housing market and the way zoning laws segregate groups of people.

“When you look at a group, lower income Black Americans or lower-income Latinos as well, housing they can afford is isolated in particular areas. And they are kept away from and having exposure on a daily basis from individuals who society would consider more affluent or influential,” Fletcher said. “... What would it look like if we reduced those zoning ordinances, let people have a house in whatever style, wherever they wanted? It would allow them to build it cheaper, but also that would expose them to different types of people.”

He wrote about the importance of going into the trailer parks and in inner cities and rural areas to invite those in poverty to “come to the table.”

Because every person is unique and created by God, there’s never a one-size-fits-all approach, especially in the context of race.

Fletcher, a parishioner of St. Joseph Church in Conway, said his Catholic faith is woven throughout the book.

“In every book I want to honor my Catholic faith and what it has given me especially these last few years of investigation and then coming into the Church last December,” he said. “I want to honor that and use those elements in ways to really inform and educate and equip people, but ultimately show people the beauty our faith contributes, primarily in the resurrection of Jesus Christ but what that means in every aspect in life.”

Where to get it

The book is available as an e-book or paperback at his website, phillipfletcher.org, Amazon, Barnes and Noble and Apple. The second and third books of the series, the dignity of work and human dignity, will be published next year.