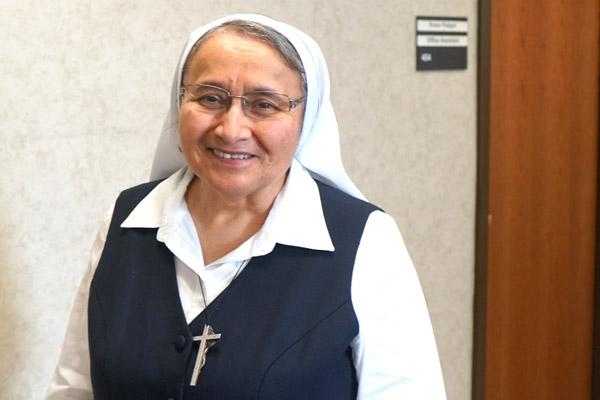 Malea Hargett
Sister Mickey Espinoza, MCP, director of Hispanic ministry, stands near her office at St. John Center in Little Rock July 16. She and the other sisters in her order usually go to Mexico to spend the summer with their religious community, but this year they chose to stay in Little Rock.

Malea Hargett
Sister Mickey Espinoza, MCP, director of Hispanic ministry, stands near her office at St. John Center in Little Rock July 16. She and the other sisters in her order usually go to Mexico to spend the summer with their religious community, but this year they chose to stay in Little Rock.

When Sister Mickey Espinoza, MCP, came back to the Diocese of Little Rock in August, after spending the last 14 years in Hispanic ministry in Dallas and as secretary and superior for the Missionary Catechist of the Poor in Mexico, she had a mission as she took the reins once again as the diocesan director of Hispanic Ministry. She wanted to listen.

“I don’t like to stay cooped in. I need to get out and know the communities again,” Sister Mickey told Arkansas Catholic July 15.

From September to March, she visited 14 different parishes and communities, listening to the stories of Hispanics throughout Arkansas to better understand their needs.

“Being there for the other person, you’re entering sacred ground. You have to take off your shoes and with all the dignity they deserve,” listen to their stories, she said. “I’m not anybody. I’m an instrument in God’s hands. It’s humbling. Take them in both hands and say that there is a God that loves them and he’s a merciful God for them.”

Born and raised in Texas, Sister Mickey is the child of Mexican immigrants and one of 12 children.

“It never dawned on me to be a religious,” though she grew up with Catholic education.

It wasn’t until she met sisters from the Missionary Catechists of the Poor in college that sparked her own calling.

“They were a very joyful group, and they always looked for the best in all of us and all of the people they served in that parish. Then I began to think about the call,” Sister Mickey said. “Something about them has attracted me and the missionary life was something I thought was super neat.”

“It was an exciting time in the life of the community,” she said, strengthening her Spanish and the plans she envisioned as a missionary sister. “I could just see myself way out there somewhere,” serving in remote communities.

But just two years later, she was sent back home, to serve in her parish in the Diocese of Dallas.

“I almost went bananas because I remember Jesus’ words, because no one is a prophet in their hometown,” Sister Mickey said.

However, she quickly learned the beautiful gift God had given her, being both bicultural and bilingual, making her especially useful in United States areas with immigrant populations. After five years, she became director of Hispanic youth and adult ministry for the Dallas diocese.

In 1996, she and other sisters were invited to build Hispanic ministry at St. Edward Church in Little Rock. Taking the words of Pope Paul VI’s papal encyclical Evangelii Nuntiandi or “On Evangelization in the Modern World,” it shaped her mission in Arkansas.

“Just to go and share faith and listen to the stories of the people and how they live their faith. Some were rural settings, very simple, but people with a lot of faith,” Sister Mickey said. “That helped me when I came here because the people we met that first year we didn’t do anything but visit.”

But the sisters went above and beyond visiting. They regularly visited the sick and dying in hospitals, helped a young couple get a marriage license at the courthouse, gave a death notice to a family whose son was killed at work at a Benton forestry company, delivered medications and documents to immigrants who were detained, and even picked them up from detention centers.

“This is Jesus’ way of doing things. He met the people where they were at before he even started his ministry,” Sister Mickey said.

In 2001, she was appointed director of Hispanic ministry for the Diocese of Little Rock, returning to Dallas four years later. But that ministry of encounter, what she did in the late 1990s long before Pope Francis advocated the Church should be like field hospitals and become a ministry of presence, is one that she’s again embracing.

But the culture is different. There are more young, bilingual priests. There are second and third generations of Hispanics now in the state and young people are more bilingual and bicultural. There are more deacons leading Hispanic ministries. However, priorities remain the same — keeping the youth connected to the Church and in places of leadership, more formation and connecting all the Hispanic ministries and movements to have a closer relationship with the parish priests and Anglos.

When former director Sister Norma Edith Muñoz left in 2019 to serve as treasurer in her congregation, she had successfully led V Encuentro or “Fifth Encounter” in Arkansas for three years. V Encuentro, a national evangelization initiative created by the United States Conference of Catholic Bishops to inspire Hispanic and Latino communities to share and become leaders in their faith, was active in 30 Arkansas parishes, with about 500 leaders trained in evangelization. Sister Mickey has met with participants, including a March 7 workshop, the last one before “everything came down” amid the COVID-19 pandemic. She also began working with Hispanic parents in Heber Springs.

While the 70-year-old admits she is not tech savvy, Sisters Ana and Patty have been keeping up with Hispanic youth with weekly holy hours, rosaries and discussions on Zoom.

“Just to keep them connected to the Church in some way so you don’t lose them either. I’m very lucky to have two young sisters working with me,” she said.

Sister Mickey has also stayed in touch with other sisters leading Hispanic communities throughout the state and in August, Sister Mickey, priests and other parish leaders will participate in a virtual formation workshop presented by the Catholic Campaign for Human Development.

Despite the lack of presence during the pandemic, Sister Mickey said moving forward that presence will be key to healing.

“Right now, it’s the leadership. Leadership in the parishes and trying to be present and listening to what some of their experiences have been during this time and how to reassure them the Church is still here for you, we will work together to grow and move closer to Christ,” she said.