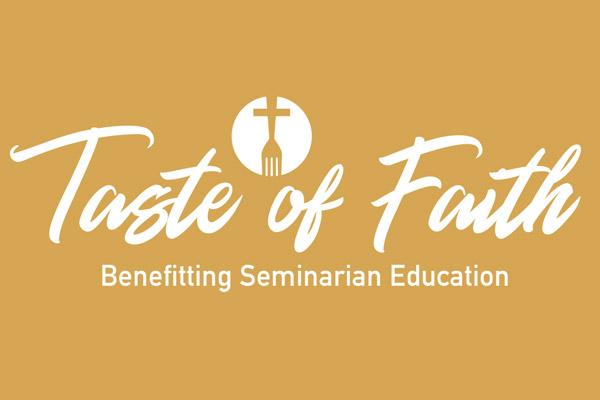 The annual Taste of Faith dinners are going virtual this year with a live one-hour program online at 7 p.m., Saturday, Aug. 8.

The talk-show-style program will be hosted by Msgr. Scott Friend, vocation director, and will include interviews with the diocese’s soon-to-be newest priests, Deacon Joseph Friend and Deacon Daniel Velasco, who will be ordained Aug. 15. Seminarians living at the House of Formation will be introduced and one of them will share a recipe.

One highlight of the Taste of Faith dinners, which are usually held in person four or five times a year around the state, are performances by the seminarian band. Msgr. Friend said the band will not perform this year, but they are hopeful they can host dinners next year with the musicians.

It will be livestreamed on the homepage of dolr.org as well as the diocese’s Facebook page and YouTube channel. For those unable to watch live, the video will be available for playback any time.

All money raised for the Taste of Faith Virtual Edition will go toward the immediate expenses of housing and educating 30 seminarians for the 2020-2021 school year. That is estimated to cost at least $1 million.

Catholics in the state were sent letters from Msgr. Friend in July to explain the financial need for seminarians. The letter included a donation card and envelope.

“With the increases in cost and seminarians, we need your help to form our seminarians into priests,” he said. “The generosity of the people of God is incredible. In the past 10 years, Catholics in Arkansas have donated $3.8 million at Taste of Faith events. That money has been used exclusively for immediate seminarian education expenses. Without your investment, it would be impossible for us to prepare these men for the priesthood.”

Supporters don’t have to wait until Aug. 8 to give for the seminarians. They can donate at dolr.org/give or mail their gift to Taste of Faith, Diocese of Little Rock, P.O. Box 7565, Little Rock, AR 72217. Taste of Faith donations will be accepted throughout August.