Deacon learned about happiness following a vocation from his uncle, Msgr. Scott Friend 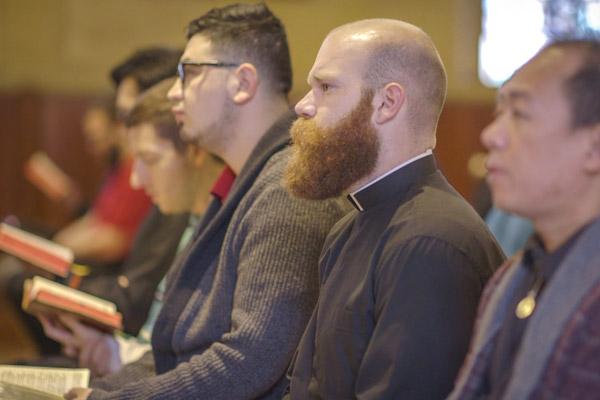 • Favorite Scripture: “O God, you are my God — it is you I seek! For you my body yearns; for you my soul thirsts, In a land parched, lifeless and without water …” (Psalm 63)

As a new priest, Joseph Friend says he wants to keep the social justice issues of racial inequality and prison ministry at the heart of his work.

Friend, younger brother of Father Patrick Friend and nephew of Msgr. Scott Friend, is ready to apply what he learned while writing his final thesis for seminary as he begins his priestly ministry.

“A couple of years ago I got really intrigued with our Black Catholics in Arkansas and the history there,” he said. “I wrote my final thesis in the seminary on the Catholic Church in Arkansas during the desegregation of schools. It has been on heart … From what I found, we weren’t as strong as we could have been as a clergy and as a Church. It is humbling to admit that, but also how can we go forward and respond from our mistakes.”

He also wants to be involved in prison ministry as he is able, following the footsteps of his mentor Msgr. Jack Harris, who he worked with last summer and again this summer.

“He has taught me what it means to evangelize and that means going out and meeting the people. Of course, with the current pandemic, that is difficult.”

He said he is grateful for the example set by his uncle, Msgr. Friend.

“I was able to look up to my uncle,” he said. “Seeing him in ministry, it gave me an awesome example. To see a priest who was deeply in love with his people and he was fulfilled. Watching my uncle I had a very clear image that the priesthood is something joyous. I loved when he came to our house for holidays and see him light up when he talked about his people and he talked about his love for Jesus. For me, it was, man, this life is something that can be awesome.”

He was also grateful to Bishop Francis I. Malone of Shreveport, the former pastor at Friend’s home parish, Christ the King Church in Little Rock.

“He somehow made it very apparent that he was our (spiritual) father,” he said. “He was another great example of a priest who was fulfilled in his ministry and loved what he did. He is deeply in love with the Eucharist and his people.”

Friend said he was happy to start his first priestly assignment in Morrilton where they have a K-12 school.

“Sacred Heart is a really incredible parish and how they have dug their heels in the ground and in a town of 6 or 7,000, they have a K-12 school. This community is a wonderful light in the city,” he said.

This summer he has watched Sacred Heart baseball games and basketball practices, and he looks forward to when cross country practices begin soon.

“I have to show them up sometimes,” said Friend, who has competed in 5Ks. “It will push me as well.”

When the school reopens in a couple of weeks, Friend said he expects to teach some religion classes during the year. His first assignment will also include campus ministry in Conway. While he isn’t sure what that will look like when the colleges reconvene in a few weeks, he is ready to be there to listen.

“College can be a stressful time so I want to be a consistent presence and know they have someone who isn’t in their immediate circle that they can vent to.”

• Favorite Scripture: “O God, you are my God — it is you I seek! For you my body yearns; for you my soul thirsts, In a land parched, lifeless and without water …” (Psalm 63)