Brackett, Booker entered formation toward the priesthood together in 2019 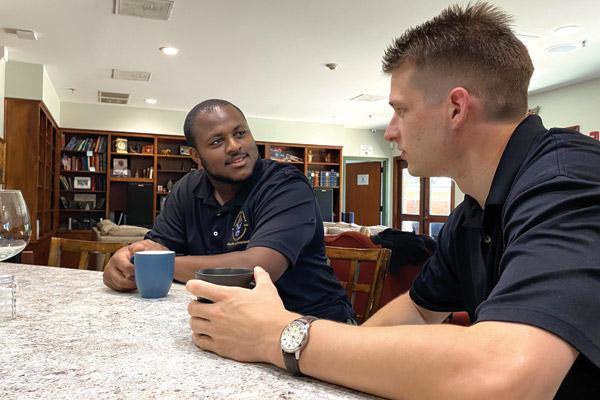 Jonathan Semmler
Seminarians Duwan Booker (left) and Joel Brackett chat at the House of Formation in Little Rock, where the two have been roommates. The friends met in college while teammates on the Hendrix Warriors football team in Conway. They experienced a conversion in college, studying Catholicism and growing in faith. They are both in formation to become priests for the Diocese of Little Rock in 2025.

Jonathan Semmler
Seminarians Duwan Booker (left) and Joel Brackett chat at the House of Formation in Little Rock, where the two have been roommates. The friends met in college while teammates on the Hendrix Warriors football team in Conway. They experienced a conversion in college, studying Catholicism and growing in faith. They are both in formation to become priests for the Diocese of Little Rock in 2025.

What to hear more?

Hear more from Duwan Booker and Joel Brackett about their friendship, football and their calling to the priesthood in a new Arkansas Catholic Asks podcast, https://anchor.fm/arkansas-catholic.

While studying and playing football together at Hendrix College in Conway, Duwan Booker and Joel Brackett had an understanding: they would both be Catholic or Protestant.

From initially living a party lifestyle to faith on autopilot, the two grew in faith as friends, and followed the call to the priesthood at the House of Formation in Little Rock.

“It just really points to nothing but the presence of the Holy Spirit in both of our lives and our willingness to say yes to God’s calling for us,” Booker, 23, said. “If you asked me five years ago, if someone honestly were to tell me with a straight face that I’d be here doing this right now, I’d call them a liar, and I’d say there’s no way and you obviously do not know me. And I’m sure Joel might say the same.”

“OK, God, you were with me before ... and you’re obviously leading me to this thing.” Duwan Booker

Before coming to Conway, the two had strong faith foundations. While growing up in Dallas, Booker was primarily Baptist.

“So definitely had that instilled in me, definitely was aware and had a relationship with the Lord,” he said, however, “I just kind of saw college as a great time of liberation, of freedom so to speak.”

“I really lacked a lot of conviction in my faith … I never had anything that developed a truly Catholic worldview,” Brackett said.

While he still attended Mass, “there was no depth there.”

The two played for the Hendrix Warriors from 2016 to 2018, with Booker known as the “QB Killer,” on the defensive line and Brackett as a linebacker and safety. The team camaraderie created a brotherhood. It was similar to the brotherhood they’d find in faith.

Leading into Brackett’s sophomore year and Booker’s junior year in 2017, the two attended a nine-week Protestant discipleship camp in Destin, Fla., with teammates and other students. They’d go out to beaches to evangelize.

“I started to fall in love with my Catholic faith and realize the truth of it, that I had a greater desire to talk. I couldn’t keep my mouth shut from other guys who were in the camp with me,” Brackett said.

Booker, who was Pentecostal at the time, noticed the camp had an intention to prevent Brackett from attending Mass, along with overhearing anti-Catholic comments.

“He just had a great persistence about him and really a duty” to attend Mass, Booker said. “... That’s something that went into me having an interest. ‘OK, so what is this thing that this guy is receiving, you know at Mass, that he feels like he can’t get anywhere else?’”

The friends then decided to dive into Catholic teaching and Church history.

Brackett said, “We just were amazed by the truth in the beauty of the Catholic faith.”

While Booker realized the truth of Catholicism, it was tough to reconcile his own plans to go into Protestant ministry. He remembers nervously praying to the saints.

“I just remember being like, ‘OK Paul, thank you for what you did.’ And I thought I couldn’t leave this guy out, and I was like ‘Moses, thank you too.’”

“But it’s growing in that and just trusting that, ‘OK, God, you were with me before and I trust you’re with me now and you’re obviously leading me to this thing. So I’m choosing to trust you.”

While traveling back from Texas on a bus with his teammates in fall 2017, most of whom were asleep, Brackett watched videos about the priesthood.

“I started bawling my eyes out on the bus and that was the first time, it just came out of nowhere I felt called to explore this a little more deeply,” he said.

He texted Booker to pray for him.

Booker converted to Catholicism in 2018 at St. Joseph Church in Conway, with Brackett as his sponsor. He had apprehension about God’s call for him, but while writing an essay for his philosophy major, “I’m just really pondering things in the Lord and having him just penetrate my heart in this moment, and I just decided at that time I was going to say yes.”

“It was just such a joy to be able to just to tell (Joel) … it was really exciting that God allowed our paths to continue from there,” Booker said.

Since then, the two have been roommates at the House of Formation.

“I think that God has ordained this relationship, just like he ordains our calling, just like he ordains pretty much all things in our lives. So definitely thankful for the blessing Joel is in my life,” Booker said, with Brackett adding, “We’re definitely blessed to be in the seminary and have such a close friend in the seminary and know we can share deep things and just walk down this path together.”

What to hear more?

Hear more from Duwan Booker and Joel Brackett about their friendship, football and their calling to the priesthood in a new Arkansas Catholic Asks podcast, https://anchor.fm/arkansas-catholic.