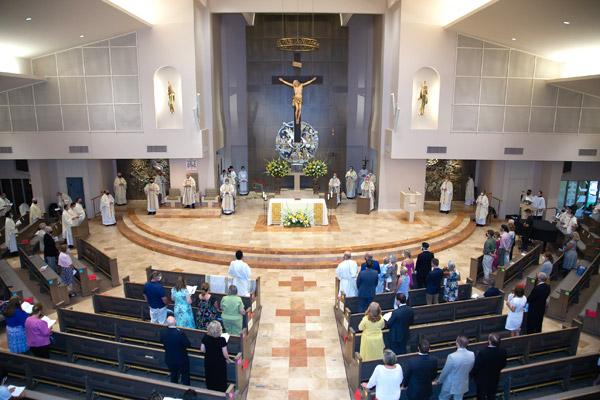 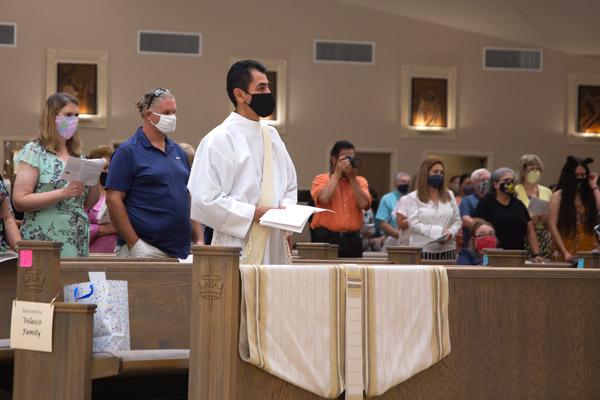 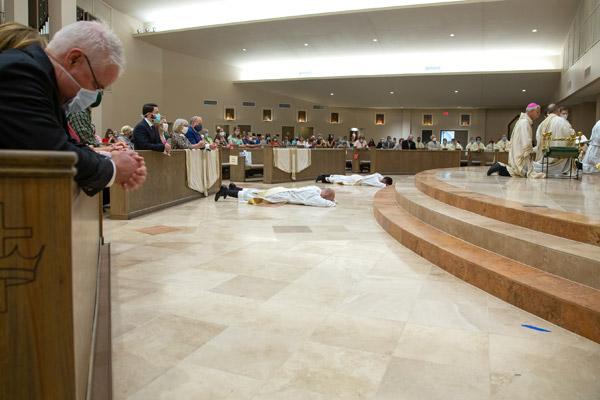 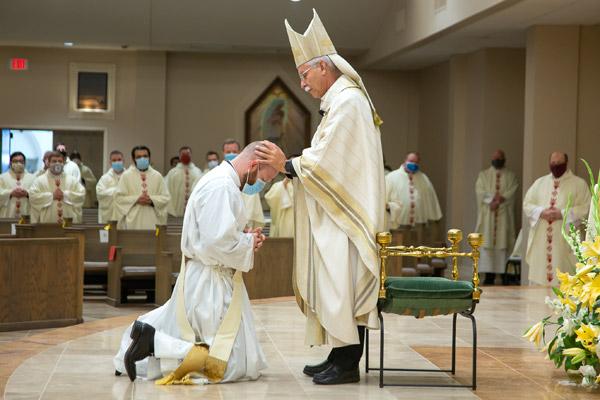 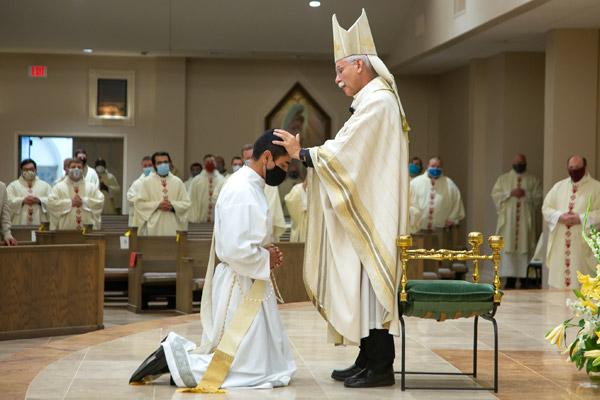 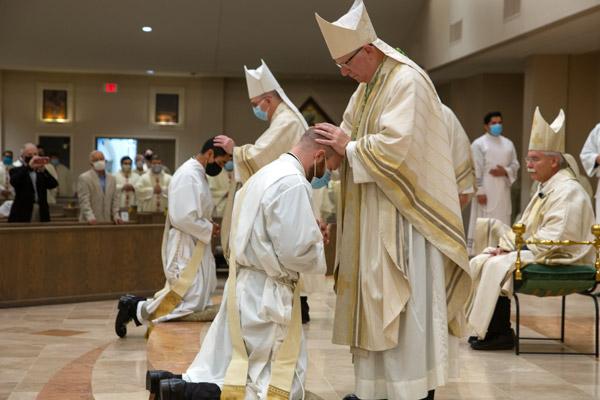 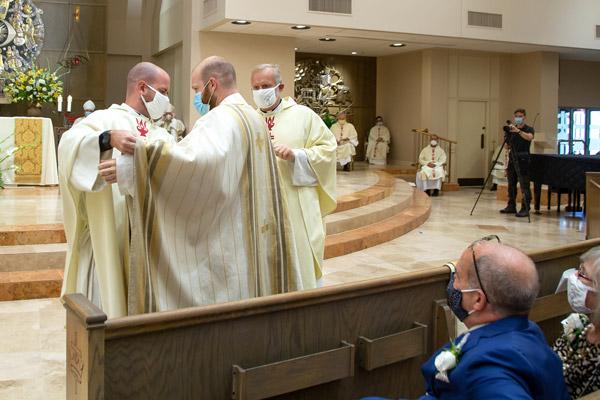 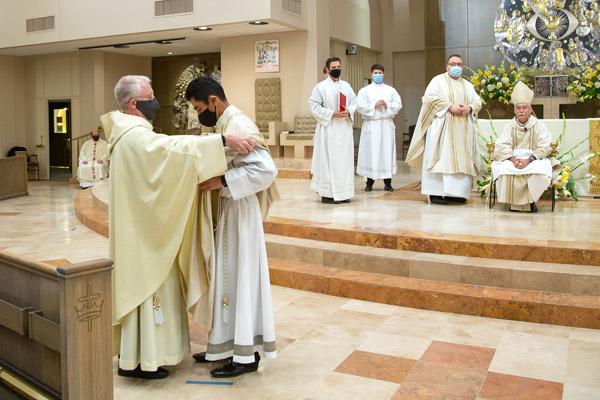 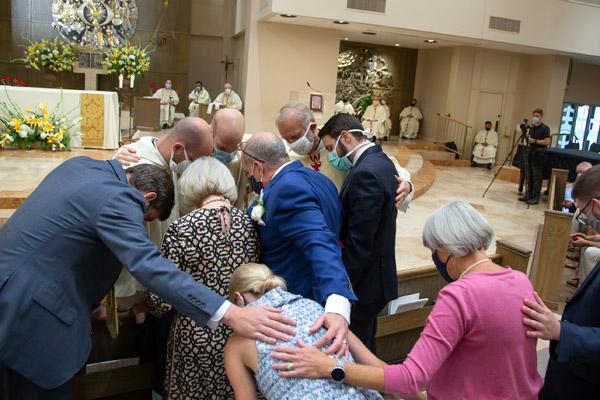 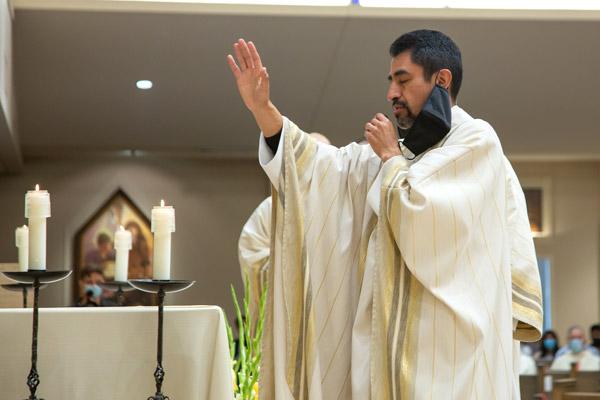 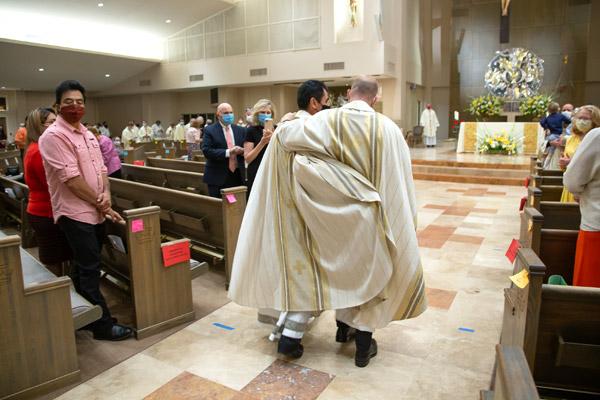 Priestly ordination, with safety protocols in place, had been postponed since May 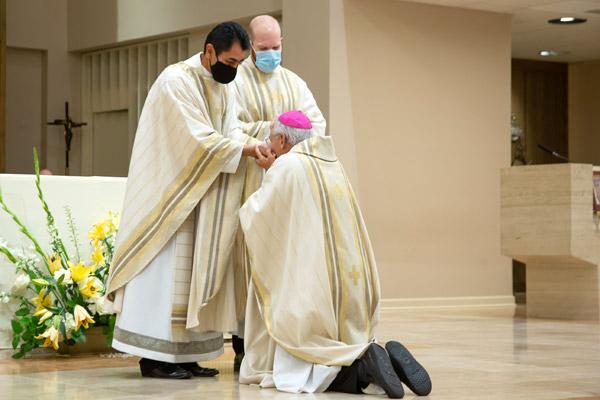 Bob Ocken
Bishop Anthony B. Taylor kisses Father Daniel Velasco’s hands at the end of his ordination Mass after Father Velasco and Father Joseph Friend gave their blessings to the bishop and then to the small congregation, masked and safely scattered throughout the sanctuary Aug. 15 at Christ the King Church in Little Rock.

Bob Ocken
Bishop Anthony B. Taylor kisses Father Daniel Velasco’s hands at the end of his ordination Mass after Father Velasco and Father Joseph Friend gave their blessings to the bishop and then to the small congregation, masked and safely scattered throughout the sanctuary Aug. 15 at Christ the King Church in Little Rock.

With masked priests and family and friends filling every other pew at Christ the King Church in Little Rock, the priestly ordination of Daniel Velasco and Joseph Friend Aug. 15 looked, on the surface, as one would expect from an ordination in 2020.

Because the world is in the middle of the COVID-19 pandemic, the ordination was more than just a celebration of two men following God’s call. It was a Mass of hope, a display of how God’s light can continually conquer the darkest times, with the Blessed Mother’s hand guiding each moment of blessing on the feast of the Assumption, particularly through the Gospel reading from Luke 1:39-56, the Magnificat.

Bishop Anthony B. Taylor pointed out in his homily the many thoughts on his mind ahead of this particular ordination -- of Father Friend’s mother, Betty Friend, who “from her deathbed entrusted both her sons to me toward the beginning of their seminary formation just a few days before returning to the Lord,” in 2013. He thought of Father Velasco’s parents, Ismael and Maria del Carmen in Puebla, Mexico, who could not attend the ordination in person because of the pandemic, but were watching via livestream. He recalled seminarian Daniel Phillips, who might have been ordained to the priesthood that day as well “had he not died so tragically after his first semester of seminary” from a car accident in 2012.

But just as the prayers of Friend, Phillips and Velasco’s parents were felt, Mary’s example of kindness, prayer and evangelization were with them, Bishop Taylor said.

“That is your calling as well, which will require you to die to yourself in order to live for others,” Bishop Taylor said, pointing out the men exemplified this with patience while their May ordination was postponed. “... “But this is much better than what would have been possible in May. See how the Lord works? God bless you both.”

“Daniel was involved in a company so he’ll understand administration well, he’s ready to go. Very solid in his faith,” Msgr. Friend said. “Joseph is solid in his faith; he’s solid especially in his prayer and he loves the Lord. And both of them in that way, that’s what they’re going to bring and embrace with is their relationship with the Lord.”

During the Eucharistic prayer, Father Joseph Friend prayed for the souls of his mother and Phillips. Following the Mass, he told Arkansas Catholic he ate breakfast with Catherine Phillips, Daniel’s mother, the day before his ordination.

“We’re thankful that they lived a life of Christians, that they are examples for us now. And so I'm joyous. I could feel them wanting to break the seams and appear here, to try and break that boundary. But I know that they were present with us.”

Just two years ago, Father Joseph Friend watched as his brother, Father Patrick Friend, was ordained to the priesthood. The brothers grew up at Christ the King Church.

“Before Mass we went back into the altar server room where Joe and I had dressed up as altar servers so many times here. And in that place that he was getting ready, we just went in there, and I tried to keep it cool and he tried to keep it cool, but we lost it pretty quick,” Father Patrick Friend said. “Talking about our mom and her presence there with us, and it was just a really sweet thing to be in that room.”

Trying to hold back tears, his father Dr. Jerry Friend said of his “little boy,” Father Joseph, “I know he’s so happy because he’s doing what God wants him to do and that’s all you want, your kids to be happy.”

Father Friend was vested by his brother and uncle. Father Velasco, the first priest to come from St. James Church in Searcy, was vested by Father Luke Turner, OSB, from St. Benedict Abbey in Atchison, Kan. The two, both older than many seminarians, studied together at St. Meinrad Seminary in Indiana and are “like brothers,” Father Turner said, who was ordained last year. The two reviewed each other’s papers and still review their homilies. They both worked in demanding business careers before becoming priests.

“He brings a really nice mix of practical world experience, life experience, along with a very merciful, loving outlook and then how do we build up God's kingdom? How do we spread this love and mercy that many people just aren't aware of, the brokenness of poverty … he has a beautiful heart.”

Though Father Velasco sat alone in his pew, he turned toward the livestream camera at the end of Mass to administer his first blessing as a priest to his family in Mexico.

“It was meaningful, the fact that I was able to give the blessing. But, we don't know when I will see them again. So that’s a challenge, but it’s all good,” he said.

Father Velasco said he has been devoted to the Virgin Mary throughout his life and felt her presence.

Along with Bishop Taylor, retired Archbishop J. Peter Sartain, former bishop of Little Rock who has moved back to Arkansas, and Bishop Francis I. Malone, bishop of Shreveport, La. Bishop Malone, former pastor of Christ the King Church, watched Father Friend grow up.

“He’s like one of my sons,” Bishop Malone said. “And it's such a great joy. Each year to come back and to witness what our Lord has been doing in his life, all along, not just recently, not just the last eight years, for what he's been doing all along preparing him for what he's going to be doing the rest of his life.”

Father Friend said after all the waiting, he and Father Velasco are ready to serve.

“I woke up this morning and it was just like the first time I felt his call. When I was a little boy, I felt it, his call right in my heart. … I was just overwhelmed with joy,” Father Friend said. “I've looked up to so many of these priests through my eight years in seminary. And, you know, as I felt the laying on of hands of all the guys placing their hands on me and then at the sign of peace, you couldn't help but feel Christ. Christ works through each and every one of these guys that is here in their ministry. And I just wanted to be a part of it. And now we are, so we're ready to go.”