Bishop Fitzgerald: From ‘depth of the abyss,’ he was ‘raised into hope and joy’ 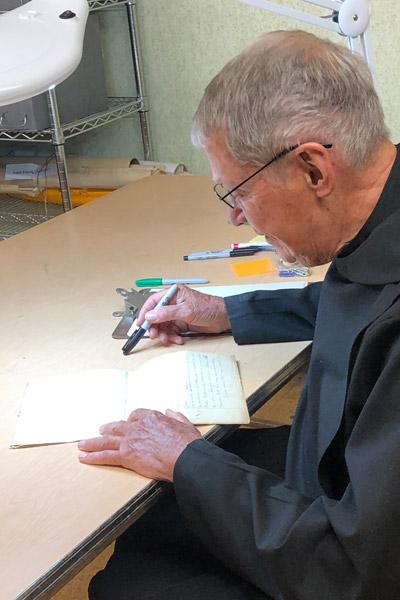 Brother Francis Kirchner
Subiaco Abbey archivist Father Jerome Kodell reads a handwritten 1881 document by Bishop Edward M. Fitzgerald, Aug. 20. It was the third quinquennial report on the state of the diocese, found in the abbey in March.

Brother Francis Kirchner
Subiaco Abbey archivist Father Jerome Kodell reads a handwritten 1881 document by Bishop Edward M. Fitzgerald, Aug. 20. It was the third quinquennial report on the state of the diocese, found in the abbey in March.

Subiaco Abbey archivist Father Jerome Kodell was sifting through abbey records in March when he came across a folder labeled “bishop correspondence.”

“All of the sudden there was this (document), browned and folded over, held together with a straight pin. It was handwritten. It said Bishop (Edward M.) Fitzgerald,” Father Kodell said.

As he began deciphering the document in Latin, he realized it wasn’t a simple letter -- it was the second bishop of Little Rock’s 1881 handwritten report to the Vatican about the state of the Diocese of Little Rock. The diocese’s third quinquennial report, which is made every five years, was for the Congregation for the Propagation of the Faith. Arkansas reported to the congregation as it was still a mission diocese.

Father Kodell and Brother Ephrem O’Bryan, OSB, have translated the document into English. It is still being stored at Subiaco Abbey.

“I was exuberant, I was excited ... I kept trying to look and see some indication of where it came from and anything else and realized early on it couldn’t be a copy. It was in his own handwriting,” Father Kodell said.

Diocesan archivist Tim Nutt said, “We don’t have quinquennial reports going back this far. This is a true find for us,” adding, “Bishop Fitzgerald is such an important figure in not only the Catholic Church in Arkansas, but in Arkansas in general because of his support and push to bring immigrants to Arkansas.”

Bishop Fitzgerald was consecrated Feb. 3, 1867, as the second bishop of Little Rock, serving 41 years for the diocese. A native of Ireland, he was the youngest bishop in the United States at 33 years old. Though he did not want to be bishop, he rebuilt churches and missions struggling after the Civil War and recruited priests, religious sisters and immigrants.

Father Greg Luyet, diocesan judicial vicar, has researched extensively on Bishop Fitzgerald, including for his college history thesis about the bishop’s involvement in the First Vatican Council in 1869, and was “impressed by the candor,” of the bishop's comments in the document. Bishop Fitzgerald was one of just two bishops who voted against the dogma of papal infallibility.

“People think that his vote against papal infallibility hurt him, so to speak. But his candor and his integrity actually encouraged the Holy See to want to give him more offices. He declined every one of them,” Father Luyet said.

Thanks to Bishop Fitzgerald’s negotiations with the Little Rock and Fort Smith Railroad Company, land was donated, including 640 acres in Logan County to the Benedictines, where Subiaco Abbey is today, according to diocesan history.

The 1881 document, his third report, detailed the number of Catholics, priests and religious vocations, schools and frank comments about his failings.

“A great part of the region is wild and uncultivated, having 800,000 inhabitants of whom not even 1 percent are Catholic,” he wrote, later adding, “When I came here in 1867 immediately after my episcopal consecration, there were only 1,600 Catholics. By 1878 there were 2,500; but now, thanks to immigration from Europe and other American states in ever-increasing numbers, there are presently not less than 7,000 Catholics in our diocese.”

Bishop Fitzgerald wrote there were 20 priests up from five initially; 13 schools instead of two; 28 churches instead of five or six.

“Whether the faith and the observance of evangelical law and the life of ecclesiastic precepts has increased on a par with material and superficial progress, I confess that I do not know,” Bishop Fitzgerald wrote. “At one time, I am thrown headlong into the depth of the abyss, then I am raised into hope and joy of the heart. The spirit of doubt has invaded our remote Arkansas with the plague of ‘civilization’; if we do not catch the contagion, it will be a miracle.”

Things were not perfect, particularly with rites and ecclesiastical ceremonies not always being “well observed,” he wrote.

“Mainly because of my own negligence and lack of concern, partly because we lack certain necessities. There are significant abuses (not, I hope, among the clerics, but among the people) according to customs, for example, around dances, taverns and depraved publications and other things of this kind,” Bishop Fitzgerald wrote. “Among ecclesiastical men, there are no abuses against the faith, as far as I know, or against Gospel admonitions. Human weakness being expected, in a word, we are holy, but we are very far from the regularity and holiness which become priests of the Lord; but neither are our priests wicked, and if they are not edifying, at least they are not a scandal to the faithful.”

Bishop Fitzgerald also wrote that marriages were primarily between Catholics and Protestants or the unbaptized and promises of mixed-religion couples to raise the children Catholic were often “just lip service.”

Because the rural diocese had not grown as much as other small dioceses, he suggested consolidating the Diocese of Little Rock, writing it was “impossible to build diocesan institutions here -- and to sustain seminaries, colleges, academies, orphanages, hospitals; to call a synod; to make visitations according to canonical norms and other things of his kind.”

“He was the bishop responsible for helping lay the groundwork for the foundation of what would become the Diocese of Little Rock that we know today. He amassed the capital, the money, and he brought in the immigrants,” Father Luyet said.

For now, it is not known how or why the document was stored at the abbey, but Nutt theorized Bishop Fitzgerald kept a handwritten copy for himself, as he often did with letters.

“Still that’s the great mystery -- how did it get here and when? I guess we’ll never know,” Father Kodell said.