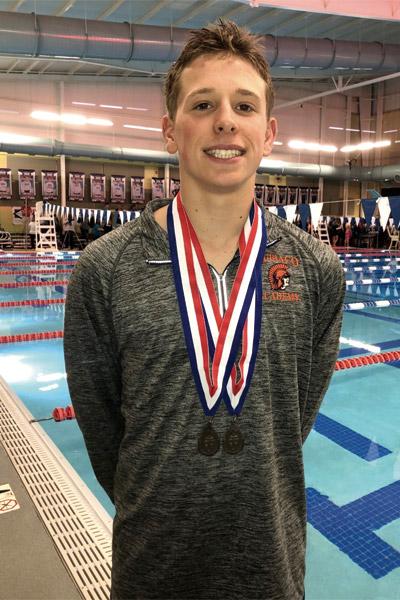 “We did very well,” he said. “We barely missed the state qualifying time for the relay by two seconds.”

That Spillers, a two-time state medalist and rising star in USA Swimming with an eye on the collegiate ranks, would speak so proudly of a group that didn’t make it out of district says a lot about the 17-year-old. But it also speaks volumes of the special group of athletes that made up last year’s inaugural team.

“We started out with five swimmers on the team. None of them had ever swam before, except one and he had swum summer club meets, which aren’t really that demanding,” Spillers said. “They drove 30 minutes one way to practice and we only get to practice twice a week.”

He pauses, pondering his rag-tag group of teammates.

“We did a lot better than I thought we would do,” he said.

Spillers, a member of St. Ignatius Church in Scranton, has been in the pool since he was in elementary school and while he’s dabbled in other sports -- mostly baseball, where he’s the starting catcher for the Trojans, but also cross-country and football -- his has been a largely uninterrupted love affair with the water.

“I took swim lessons when I was 7,” Spillers said. “The instructor was also the summer league coach. She talked to my parents and she was like, ‘You need to get him into (competitive) swimming. He’s pretty good.’ So, that was it. I’ve been doing it ever since.”

After three years with the club team Clarksville Sea Dragons, Spillers began swimming full-time for the USA Swimming-affiliated Central Arkansas Racers of Benton, training at Clarksville for meets that take him all over the central U.S. With talent enough to hang with some of the sport’s best athletes, Spillers still puts in considerable work to maintain his competitiveness.

For all of this, one of his goals for his high school career -- to compete for Subiaco Academy -- was almost too much of a challenge even for the driven Spiller. For starters, there was neither a swim team nor much desire to start one by the time he arrived on campus.

Spillers was joined in the effort by his mother, Mary Jane, an administrator at University of the Ozarks in Clarksville, who’d followed him around to enough meets over the years to pick up a few coaching tips, though she’s quick to downplay the extent of her expertise.

Together, mother and son took on the challenge of recruiting and coaching a group of green swimmers, which Ethan did in addition to his own training. That alone set the tone for his teammates, Mary Jane said.

“As a coach, what I saw in him was extreme dedication, someone who is at practice anytime that the pool is open, someone who’s always striving to be better,” she said. “When it comes to the aspects of the team sport, he’s there motivating and encouraging his Subiaco swim mates.”

“He wanted this for the students of Subiaco who weren’t into the other sports. It brought them together to do something that they hadn’t ever had before at Subiaco.”

The team showed Ethan that camaraderie in return, traveling to the state meet in Bentonville to cheer him to second place in both the 100-yard butterfly and 100-yard breaststroke en route to River Valley Swimmer of the Year honors. He enters his final year looking for another crack at the gold and a state record in the butterfly where he’s just a couple of seconds off.

But to do it, he’ll have to work harder than ever given the pandemic hurdles put before him.

“This summer, the pool was closed down right when school let out. So, I bought a wetsuit and would swim in the lake and do a couple of miles once or twice a week,” he said. “When the pool opened back up, I started going but then I got a job. Twice a week, I would leave work early and go to swim. Then, the pool closed again and they just opened it back up, then school started.”

“So, I haven’t swam in, really, three months. It’s been really hard. Right now, I’ve just been doing CrossFit in the mornings. I wake up at 4:15, drive to Paris and go to CrossFit. Then I go home and eat breakfast and I come to school. I get out of school and go to football.”

What Spiller doesn’t speak of is what every athlete has on his or her mind these days and that is whether there will even be a swim season. Instead, he keeps training, encouraging others and pushing himself.

“I want our team to get a relay to state and everybody to be able to compete this year,” he said. “Mostly, I just want to get back into the pool.”