Says he will offer private 'fraternal correction' to priest 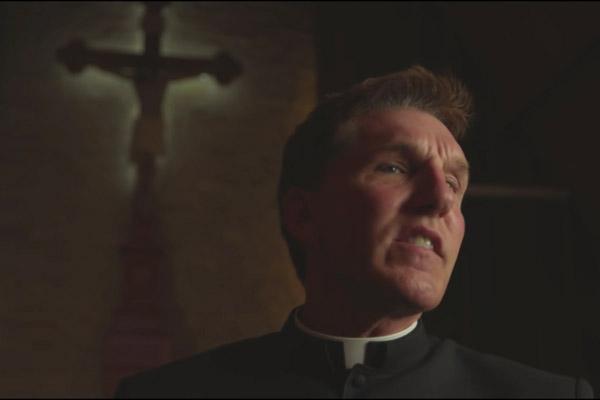 Screen capture from YouTube
Father James Altman of LaCrosse, Wisc., is seen in a YouTube video in which he says Catholics who are Democrats must "repent" of their support for the party or "face the fires of hell."

Screen capture from YouTube
Father James Altman of LaCrosse, Wisc., is seen in a YouTube video in which he says Catholics who are Democrats must "repent" of their support for the party or "face the fires of hell."

WASHINGTON (CNS) -- The bishop of La Crosse, Wisconsin, said Sept. 9 that he has privately begun "applying Gospel principles" to correct a pastor who in a video says Catholics who are Democrats must "repent" of their support for the party or "face the fires of hell."

"Canon law indicates that before penalties are imposed, we need to ensure that fraternal correction, rebuke or other means of pastoral solicitude will not be sufficient to repair the scandal," Bishop William P. Callahan said in a statement about Father James Altman, pastor of St. James the Less Parish in La Crosse, and his video.

The priest's nearly 10-minute YouTube video was posted Aug. 30 by Alpha News MN on its website. To date, over 389,000 people have viewed it at least once.

"Here's a memo for clueless, baptized Catholics out there: You cannot be Catholic and be a Democrat. Period," the priest says. "Their party platform absolutely is against everything the Catholic Church teaches," especially its teaching that abortion is a "moral evil."

The priest has become "a social media phenomenon and is now a mainstream media story," Bishop Callahan said. "The amount of calls and emails we are receiving at the diocesan offices show how divisive he is.

"I am being pressured by both sides for a comment; one side holds him up as a hero or a prophet, the other side condemns him and vilifies him and demands I silence him."

But right now, the bishop said, he is adhering to what "the Gospel dictates," that any means of "pastoral solicitude" in Father Altman's case must be conducted in private, not "in the bright light of the public arena."

"Most people expect a decisive move from me, one way or another. Many suggest immediate penalties that will utterly silence him; others call for complete and unwavering support of his views," Bishop Callahan said. "Canonical penalties are not far away if my attempts at fraternal correction do not work.

"I pray that Father Altman's heart and eyes might be open to the error of his ways and that he might take steps to correct his behavior and heal the wound he has inflicted on the body of Christ."

Father Altman opens his video with a prayer about the blood of Christ and his sacrifice on the cross to save humanity. He also quotes from the Baltimore Catechism that God made us "to know, love and serve" him, and argues that "godless politicians" and the nation's "godless education system" have resulted in policies and people who do not know God and so cannot love and serve him.

He included brief flashes of photos of House Speaker Nancy Pelosi, D-California, Democratic presidential nominee Joe Biden and an empty classroom. Pelosi is standing behind a sign calling for "equal access to abortion." Both Pelosi and Biden, who are Catholic, support legalized abortion.

Those who accuse him of "just being political" need to remember the words of Pope Benedict XVI, the priest says: "The church is not a political power. It is not a party, but it is a moral power. Therefore, since politics fundamentally should be a moral enterprise, then the church in this sense has something to say about politics" and Catholics have a duty and an obligation to speak up when politicians and politics "act in an immoral way."

In his statement, Bishop Callahan said that after viewing Father Altman's video, "I understand the undeniable truth that motivates his message."

"When we approach issues that are contradictory to the faith and teachings of Jesus Christ and the Catholic Church, particularly on abortion and other life issues, we should invite dialogue and heartfelt conversion to the truth," the bishop said. "Our approach must never seek to divide, isolate and condemn."

"That being said," he continued, "it is not only the underlying truth that needs to be evaluated but also the manner of delivery and the tone of his message."

Bishop Callahan also pointed to Father Altman's tone, saying it "comes off as angry and judgmental, lacking any charity and in a way that causes scandal both in the church and in society."

"His generalization and condemnation of entire groups of people is completely inappropriate and not in keeping with our values or the life of virtue," he added.

"Pray for me as I address this issue, and pray for Father Altman that he might hear and respond to my fraternal correction," the bishop added. "Finally, please pray for the church that we might seek the truth in charity and apply it in our daily actions."

At least one Catholic bishop has endorsed Father Altman's video, Bishop Joseph E. Strickland of Tyler, Texas. In a Sept. 5 tweet, he shared the video and thanked the priest for his "courage."

He urged his followers to "HEED THIS MESSAGE" if they "love Jesus and His Church and this nation."

In his video, Father Altman questioned why he was being criticized for speaking out when it "was OK" for Jesuit Father James Martin, editor at large of America magazine, to be a "premiere" speaker at the Democratic National Convention.

The priest, whom he called a "heretic," delivered the benediction at the close of the convention Aug. 20 via a prerecorded message. In it, he focused on "the dignity of all human life, including the unborn, including LGBT people, including inmates on death row."

On Aug. 24, during the opening evening of the Republican National Convention, New York Cardinal Timothy M. Dolan delivered a prayer, thanking God for living in a country that respects religious freedom. He also prayed for people battling COVID-19 and those caring for them, the unborn, the elderly, immigrants and refugees.