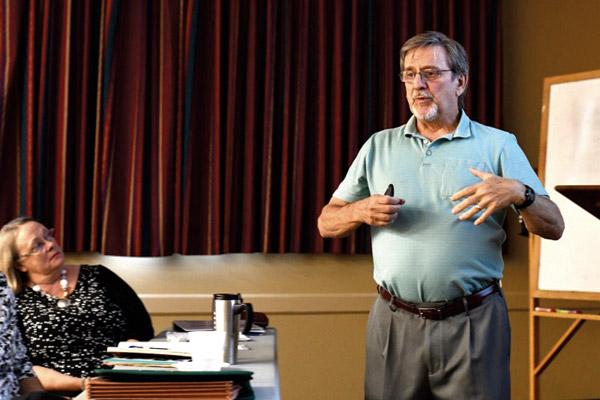 Sherry Simon
Glen White, a leader in the Braver Angels alliance in Central Arkansas, gives a presentation to Pax Christi Little Rock, a Catholic peace and social justice organization, at St. John Center in Little Rock Aug. 8, 2019. The national nonprofit aims to teach others how to have civil political discourse.

Sherry Simon
Glen White, a leader in the Braver Angels alliance in Central Arkansas, gives a presentation to Pax Christi Little Rock, a Catholic peace and social justice organization, at St. John Center in Little Rock Aug. 8, 2019. The national nonprofit aims to teach others how to have civil political discourse.

Whether it’s sitting across from a close relative, chatting with friends or engaging with a stranger on social media, navigating politics can be like dodging landmines. But it doesn’t have to be.

Braver Angels, a national nonprofit, was founded on the idea that liberals and conservatives can come together “not to find a centrist compromise, but to find one another as citizens,” according to its website, braverangels.org.

The movement began after the 2016 presidential election between President Donald Trump and Hillary Clinton. The co-founders gathered a group of 10 Trump supporters and 11 Clinton supporters in South Lebanon, Ohio, for political discussion. It became the first Red/Blue Workshop. Now, with about 10,000 members across the country, the nonprofit has established local alliances by state. It hosts workshops, a Braver Angels podcast, debates and discussions, some tailored to the 2020 election.

An initiative called “With Malice Towards None,” is geared toward religious congregations.

Arkansas leaders Dr. Glen White, a semi-retired Little Rock psychologist and a member of the Episcopal church, and Dr. April Chatham-Carpenter, the department chair of Applied Communication at the University of Arkansas at Little Rock and a member of the Anglican church, spoke with Arkansas Catholic about the skills and importance of having civil political discussions. White considers himself predominantly “blue,” or Democrat, while Chatham-Carpenter considers herself “red,” Republican or “purple,” depending on the issue.

The central Arkansas alliance has about 25 leaders/active members and can host free virtual workshops for parishes, ministries and other groups.

For more information about Braver Angels visit braverangels.org or to schedule a workshop locally, contact Glen White, , or April Chatham-Carpenter, .

One Braver Angels initiative this year is focused on “fighting right.” What does that mean?

White: We expect people to be passionate in their beliefs one way or another, we expect there to be strong disagreements. But more than that, the overarching value beyond your political beliefs, is the value of being respectful of the other person and not letting hate and dehumanizing tendencies start to get into it. So you can have different opinions and you can fight for your side to come out because you obviously believe that your side is right. But fighting right means you still are abiding by basic values of how you treat other people whether you agree with them or not.

Chatham-Carpenter: To me, it comes down to really respecting the dignity of every person. And what happens a lot of times, especially in social media, is that we blast at a particular side or we really show that our side seems like, with language that we use, is best and the other side, we demonize them. And really what you're doing when you do that is you're not opening up the opportunities for conversation.

Why is it important for people of faith especially to learn how to properly discuss politics?

White: The Christian message of Jesus, as I understand it and what I’ve always heard, has a lot to do with love. Love one another, giving back to others — it's a very kind, respectful, loving, positive message. What we're talking about in Braver Angels is getting people on opposite sides who very easily turn into opponents and enemies and start to dehumanize and hate each other, that if you want to be consistent with a Christian message.

Addressing just a few key points you discuss in your “Skills for Bridging the Divide Workshop,” what are your tips for discussing politics without getting angry?

White: You listen to understand, rather than listen to figure out the weak spots so you figure out how you're going to do your comeback. Now it doesn't mean you don't have a comeback or you don't speak your own mind, but you start listening carefully to try to understand the other person where they're coming from.

Chatham-Carpenter: There are certain ways that we can speak about our own side that actually help the other person as a listener. So things like “I feel” I messages, maybe “I don't understand all of it.” Maybe that can kind of make your messages not be quite so dogmatic. Telling a story about how you may know somebody that has experienced this or you've had some experience that also helps the other person, it's easier for them to learn from … Part of what I have to do as a person who's getting ready to enter into a difficult conversation is to really think about my own biases, where is it that I'm likely to react? And what is it that's causing me to react? Is it fear, is it anger, is it dehumanizing the other? … One of the most practical things that I actually do when I'm trying to listen to someone who has a different opinion than me and I'm feeling the emotions kind of rise, I actually do something physical ... I open my hands up ... I’ll do it underneath the table. I open my hands up, and as I do that I am making an effort to really receive from the other. Because there are always things that I can learn from the other person, even if I am so opposed to their thoughts.

Is there a benefit to asking a person why they believe a certain way?

Chatham-Carpenter: There is, but if you use the word “why” though sometimes it can seem like you’re really getting ready to criticize them. The nonverbals are all important here. “So, can you tell me a story about what makes this so important to you?” Just try to get them into a storytelling mode because storytelling mode gets you away from the dogma.

White: Or just kind of share your own story and sometimes that helps inspire other people to share their story as well.

What is the No. 1 pitfall to avoid when you are having a politically charged issue?

Chatham-Carpenter: Anything that we say that says, “You're wrong. You're just wrong” or “You're stupid.” I mean, that immediately cuts off the conversation but there's many, many ways that we can just say that without actually saying those words.

White: Another version is, “You just don't know what you're talking about. You've been listening to the wrong stuff, you don't know the facts.” It’s accusing, it’s pointing the finger at the other person. We all know what it's like when someone points the finger at us. Iit doesn't feel good and so we get our defenses up and when you get the defenses up, then you're less likely to hear what the person has to say. So that's why again it's important to be respectful and keep the emotions low, because then the other person is more likely to actually hear what you have to say.

Some people feel like they absolutely have to change another person’s mind. Is that really what it should be about?

White: Most of the time, we're trying to change that person's mind and first thing I'd say is, let it go because it ain't gonna happen. There are occasionally times when someone might see a point … What you're really after is the relationship and increased understanding of where the other person comes from, because if you pursue that, then you increase the chances that the person might hear you and have less defensiveness. But going in trying to win an argument is almost guaranteed to lose it, or at least to not get anywhere.

The Braver Angels website pointed out people have been passionate about politics long before 2016, but what changed or how did we get to the tipping point of polarization?

Chatham-Carpenter: Social media. It really has a lot to do with it and people who study social media and the algorithms that are used, for example Facebook, know that it creates and intensifies something called echo chambers, where the more that I post or I click on a particular post, the more that I'm going to see a post, like that. And so it ends up almost narrowing down the scope of who it is that I'm interacting with or getting information from. You have to make a real effort to click on things that are on the opposite side of what you’re liking ... And so we're really not listening. We're really not taking the time to sit down and have conversations about things.

White: You'd be surprised how much of this is really steeped in neurological and evolutionary based factors. One idea is that we have such an innate tendency toward tribalism and that is to agree with our group, Because if you think back to the way things were most of our history, it was a very dangerous world, and people did not survive very long if they weren't able to be in a cohesive participatory group of individuals who worked together for the common good. … the idea is over time our brain has developed this tendency to immediately latch on to those areas that we're familiar with because our group says this is the way things are … The other thing that I see in our country is that it used to be country over party … I think the truth is that people are so aligned with their party or their ideological view that they kind of forget the bigger picture and what's good for the greater amount, what's better for the U.S. overall or people in the U.S. or humanity as opposed to what's better for people in my party.