Diocesan priests discuss voting and the need for forming consciences 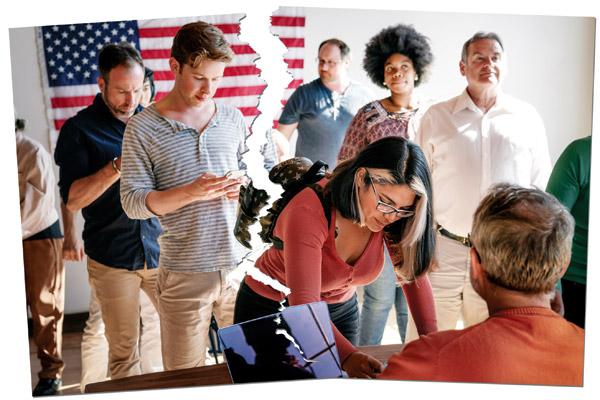 Am I going to hell?

As the elections get closer, statements are being made in the media and social media about how Catholics should or should not vote. Click here to read Bishop Anthony B. Taylor to summarize our duties as Catholics and voters.

Politics and religion are two things we are told never to discuss in polite company, yet are often debated. In the divisive world of politics, it’s easy to be sucked into party loyalty and shed our Catholic identity or try to mold it to fit the Republican or Democrat model.

Religious leaders can help guide Catholics during election season, but God is the compass.

“The most fundamental identity that God has given us is we’re his children. We are adopted, beloved sons and daughters of God,” said Father Jeff Hebert, prefect of the House of Formation in Little Rock and an assistant vocations director for the Diocese of Little Rock. “When it comes to politics it’s that same principle. I’m a beloved son or daughter of God, but I’m also in a human family” that requires participation in society.

“I would say they need to realize that neither party espouses a Catholic position -- not on pro-life issues, not on economics, not social justice; fully espouses a Catholic position on anything,” said Father Alejandro Puello, pastor at St. Anne Church in North Little Rock. “To pretend they do … what you’re saying is you're more invested in being a member of that party than being a Catholic … if that’s where you are, that’s a very dangerous place to be, spiritually.”

“I’ve told my parishioners outright, the competition for the soul of people is not some other church, it’s the religion of politics.” Father Alejandro Puello

According to 2019 Pew Research Center data, 59 percent of Catholics are unsure about the political affiliation of their priests, higher than the other religious groups surveyed. The United States Conference of Catholic Bishops updates its “Forming Consciences for Faithful Citizenship: A Call to Political Responsibility” to allow Catholics to form their own consciences on who will get their vote, with the Church not taking a political side. While moral issues may be discussed from the pulpit, it connects with Scripture and proclaiming the Gospel.

Father Puello said he concentrates on the spiritual or moral aspect of an issue when it could be perceived as political and not espousing either party when discussing it.

“Especially as priests, we run into the problem of wittingly or unwittingly signaling people one way or the other and that can be very dangerous,” he said. “People sometimes hear what they want to hear. If their priest even hints at preferring one or the other (political party), we’re giving people a pass from doing three things: forming themselves, forming their conscience and praying.”

According to “Forming Consciences,” there are four basic principles of Catholic social doctrine to consider when forming a voting conscience:

• the dignity of the human person,

“With this foundation, Catholics are better able to evaluate policy positions, party platforms and candidates’ promises and actions in light of the Gospel and the moral and social teaching of the Church in order to help build a better world,” the document stated.

This means Catholics could, after forming their conscience to these standards, vote for either political party.

“It’s not a matter of just the simple, ‘Have you voted Democrat or Republican?’ There’s a lot more complex actions of it, the intentions and reasons for voting for a certain politician,” Father Hebert said.

For example, the USCCB states abortion continues to be “our preeminent priority because it directly attacks life itself, because it takes place within the sanctuary of the family and because of the number of lives destroyed. At the same time, we cannot dismiss or ignore other serious threats to human life and dignity, such as racism, the environmental crisis, poverty and the death penalty.”

Father Hebert explained if a person votes for a politician solely because that politician supports abortion, intending to support abortion through that vote, “that’d be a moral problem.”

“There may be other reasons you vote for a candidate that supports abortion,” while remaining “brokenhearted” about their support for abortion, he said. “But you’ve made other judgments and proportionate reasons … this other person poses a threat in another way. They also support other things practically applied to the common good. A simple vote for one person or another is not a moral problem. It doesn’t prohibit you voting for one person or another.”

Ignorance is not bliss

Father Puello also pointed out that it’s not all about one politician. Certain issues carry more weight in congressional or local campaigns than at the presidential level.

“If you’re interested in abortion, the make-up of Congress is far more imporatnt than the president. If you’re interested in ending the death penalty, local legislature is more important than the president,” Father Puello said. “The sad thing is, ignorance is not bliss; ignorance is what’s killing us. Ignorance is what’s allowing very morally bankrupt and spiritually corrupt people to sell us bad ideas and simple ideas to complex issues. That worries me because it’s made us less prayerful.”

In a recent viral video, Father James Altman of the Diocese of La Crosse, Wis., said, “You can not be Catholic and be a Democrat.” Father Puello said in choosing to take a side, Father Altman chose to become the moral authority, rather than letting Catholics form their own conscience, which is what the Church teaches.

In the same vein, voters can judge a politician’s actions as immoral or not in line with Church teaching, but “their eternal soul is a different question. No matter who it is, it’s not what a Catholic is called to do,” Father Hebert said.

Beyond the direction of the country, political polarization can harm a parish family by making it us versus them.

“The minute I start seeing someone else as an ‘other,’ not as a fellow human being, not as a fellow Catholic, it’s a slippery slope to dehumanizing them,” Father Puello said.

Part of avoiding polarization in a parish is leadership. Father Puello said it matters when Church leaders are clear with their parishioners, that their role and the Church are there to guide in informing and forming consciences. An important piece to overall understanding is that issues are complex.

“What we do now is paint the world in black and white and we tell the world it’s good versus bad. Us good, them bad,” Puello said. “The minute we fall into that trap, we sin. I want to be very clear about that. I’m not merely saying it’s an error. I think it’s a sin to fall into that trap because once you get to that place, you’re no longer trying to figure out, ‘How do I love my enemy?’ You’re trying to figure out, ‘How do I destroy my enemy, how do I excise them out of my society?’”

Father Puello said he has warned his parishioners about the troubling sin of idolatry plaguing politics today.

“We’ve placed our hopes and dreams, our aspirations for the future, how we measure what is good, not the supreme good that is God, but what party espouses what,” he said. “I’ve told my parishioners outright, the competition for the soul of people is not some other Church, it’s the religion of politics. If you hear people talk about politics they use their religion terms -- savior, devil. One who delivers … That’s literally the language of Jesus versus satan, God versus the devil.”

Helping form a conscience can be difficult from the pulpit, but Father Hebert said he sees it more in one-on-one meetings or in the confessional, where a person is already baring their conscience before God and experiencing his mercy and love.

“Sometimes people confess anger and frustration as a sin. Sometimes it isn’t. The Lord got so angry he made a whip,” driving merchants out of the temple, he said. “... They’re really frustrated. They are afraid sometimes by the state of the country from (higher) political leaders to city council, to the point where it causes fear, anger, frustration ... I’m not telling them who to vote for, but the principles by which they can vote.”

While it’s human nature to have flash moments of anger mixed with passion about a particular political issue, Father Hebert said it’s important to keep dignity as the focus.

“I would say right at the heart of social teaching is the dignity of the human person. We’re all broken people, we don’t share the same views on things, but we share the dignity given to us by God,” he said.

Am I going to hell?

As the elections get closer, statements are being made in the media and social media about how Catholics should or should not vote. Click here to read Bishop Anthony B. Taylor to summarize our duties as Catholics and voters.