For more than 35 years, St. Mary parishioners debated what to do with highly stylized 1935 artwork covering the wall behind their altar. Though discovered in 1970 to have been painted by an artist who later became famous, the mural was damaged by the years and unappreciated by many. A $60,000 restoration was completed in March. 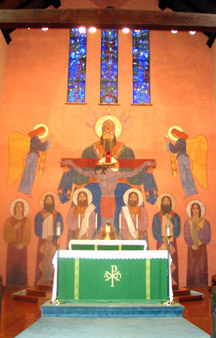 Tara Little
The 30-by-30-foot casein-on-brick mural behind the altar at St. Mary Church in Helena was professionally restored to its original appearance by a Searcy County art restoration company.

Tara Little
The 30-by-30-foot casein-on-brick mural behind the altar at St. Mary Church in Helena was professionally restored to its original appearance by a Searcy County art restoration company.

HELENA -- The 71-year-old mural on the brick sanctuary wall of St. Mary Church received a long-awaited and much-needed facelift in March, thanks to parish and alumni donations and an endowment established by the artist for the sole purpose of preserving the work.

The $60,000 restoration, which took two months, was done by Norton Arts, a fine arts conservation company in Marshall (Searcy County). The process removed decades of water damage, discoloration, grime and over-painting, and returned the 30-by 30-foot mural to its former glory, finally enabling parishioners to take pride in the abstract artwork they once considered an embarrassing "eyesore."

In fact, the mural was so disliked by parishioners that it was covered by a large blue velvet curtain only five years after it was painted in 1935. It would seem the large stoic figures, inspired by the mosaics in early Byzantine churches, painted on a grayish-pink background wasn't what some parishioners had in mind when it came to awe-inspiring church art.

This sentiment grew when the curtain was removed in 1970 after 30 years of damage had festered under the curtain making it difficult for even the most open-minded art critic to appreciate it.

That was not the case for 77-year-old Annetta Beauchamp, an artist and St. Mary parishioner since 1947.

The mother of five, who is also a retired nurse and unofficial parish historian, said when she saw the mural for the first time, after the curtain was removed, she "was completely blown away by it."

"I almost couldn't follow the Mass, I mean I was completely overwhelmed and I was one of the few because everybody hated it," she said. "Nobody was used to that kind of art. It's fashioned after the Byzantine mosaics and they're stark and they're plain and they don't have any perspective."

The mural features a large figure representing God in the center, who is holding in his arms and extending to the world his crucified Son on the cross. On God's head is a miter on which two angels face the center in adoration of the Holy Spirit, symbolized by a dove.

Behind the miter is a triangle, which represents the Holy Trinity. Outside the triangle is a circle from which six gray tongue-like rays shoot out, three on each side, that illuminate God's divine presence.

Hovering above on the right and left of God's head are two adoring angels, each holding a chalice and Host, symbolizing the Body and Blood of Christ. Standing in front of God and Jesus crucified are the six prophets of the Old Testament -- Amos, Isaiah, Jeremiah, Daniel, Ezekiel and Hosea -- who foretold the coming of Christ.

Beauchamp loved the mural at first sight and knew instinctively it was special so when talk of painting over the mural began, she was devastated. In 1970 she turned to Dr. Jean Knowlton, an art history professor at what is now Phillips Community College of the University of Arkansas in Helena.

Beauchamp brought Knowlton to see the mural and the professor discovered the initials "CQ + DQ" near the bottom of the mural on the right side. Because the mural was covered for so many years, its history had been lost. It was this discovery that initiated Beauchamp's fierce 36-year battle to save the mural and persuade parishioners and pastors alike to appreciate the beauty of the original artwork.

Beauchamp said Knowlton researched the initials and thought it might be highly acclaimed artist Charles F. Quest and his wife, Dorothy.

For two months the duo searched and finally found the Quests in Tryon, N.C., where Charles was very ill and Dorothy was caring for him. She confirmed that her husband had painted the mural at St. Mary Church. In fact, it was Quest's first among many commissions to paint murals, including one from Cardinal Joseph Ritter to paint a replica of Diego Velasquez's "Christ Crucified" over the altar at the old cathedral in St. Louis.

When Beauchamp told Dorothy Quest that parishioners wanted to paint the church interior white, "Mrs. Quest said, 'They will paint that church white over your dead body.' And it was almost over my dead body," Beauchamp said.

She even visited Bishop Albert Fletcher to ask him to save the mural. Ultimately it came down to a parish-wide vote and "they voted 2 to 1 to save it."

But she couldn't stop parishioners from painting the other walls white.

Dorothy Quest had advised, "'If you just can't stop them, be sure it has a soft rosy glow to the white,'" Beauchamp recalled. "'Whatever they do, don't let it be a blue white.' Well they chose a white that was called French blue and it was ghastly."

After saving the mural, Beauchamp proceeded with the task of repairing the damage. In the following months Dorothy Quest told Beauchamp how the mural was painted and how to repair it. By 1971, Beauchamp herself carefully touched up only the mural background because Charles Quest did not want her to paint over his figures.

She came to the rescue of the mural a second time in the 1980s to remove names that had been painted in red and outlined in black over the prophets' heads and returned the key and scrolls to their original colors after they had been painted a bright gold.

By the time Father Joe Marconi became pastor in 2002, he said the mural had suffered additional water damage and was again badly in need of repair. Two years before Charles Quest's death in 1993, Dorothy Quest notified the parish of his $15,000 gift to the parish to restore the mural. Through the years it accrued interest and when it reached $30,000, Father Marconi asked the Diocese of Little Rock to recommend a firm to do a complete professional restoration.

Father Marconi contacted Norton Arts and in June 2005 was told it would cost $60,000. He raised the remaining $30,000 from donations by the time the project was completed at the end of March 2006.

Father Marconi said restorers first matched the paint and cleaned off all the dirt and grime and then painted over only the damaged areas working from the bottom up the entire mural.

"Their objective was to restore the work, so they wanted to leave as much of Charles Quest on the mural as they could," Father Marconi said. "So as not to affect the value of Quest's work, the Nortons were painstakingly careful ... even making sure their brush strokes followed the original artist's techniques."

Beauchamp said Norton Arts found in an analysis of original paint chips taken from the mural that the Quests had mixed mica with the "casein" (milk byproduct used by the ancient Egyptians as a binder) paint, which caused a subtle luminous effect on the wall.

"Mrs. Quest said she stayed on her knees for months. They ordered the pigments from a place in New York City and she ground everyone of them with mortar and pestle and she mixed it with ... buttermilk and eggs in from the farm every day and that was done exactly like the early Christian days," Beauchamp said.

"I feel like they really did a good job," she said with satisfaction after being the restoration project's strongest advocate.

Beauchamp passion for preserving the past also extends to the historic homes in Helena.

"I've lost more battles than I've won," she said of her preservation efforts. "They've torn down so many gorgeous things over here that it would just break your heart."

Before they were famous: The three friends who crafted St. Mary Church in Helena

According to Annetta Beauchamp, parish historian, long-time pastor Father Thomas J. Martin commissioned three unknown men who were also friends from St. Louis, Mo., to design a new church for St. Mary Parish in the 1930s. Charles Eames was the architect, Charles Quest painted the mural and Emil Frei designed the stained glass windows. The mural and windows were designed to compliment the early Christian church design of Eames. Eames later became a nationally known furniture designer, Quest's art hangs in numerous museums and Frei, whose Frei Glass Works is still in operation in St. Louis, was even chosen to do window repair work at the Vatican.

Vaslau Kesl, a Czechoslovakian immigrant and parishioner, built the church with his son, Oldrich. They had come from a long line of church builders in Europe dating back to the 10th century.

Their descendents, Jimmy and Vensil Kesl, are still parishioners and builders in Helena today.

The church was dedicated in 1936 and the late Father Martin is buried next to the church.

Who was Charles F. Quest?

Charles F. Quest (1904-1993) grew up in St. Louis, Mo., where he earned a bachelor's and master's degree in fine art at Washington University School of Fine Arts (now Washington University in St. Louis). He also was an art instructor there for 27 years until 1971. According to a Georgetown University biography, Quest won numerous awards and had art exhibits in such galleries as the Smithsonian's National Museum (now known as the American History Museum) and his prints were among collections in the Library of Congress, Chicago Art Institute, Metropolitan Museum and the American Embassy in Paris. Georgetown University owns a large body of his work including drawings, paintings, sculptures, stained glass and some 260 prints.