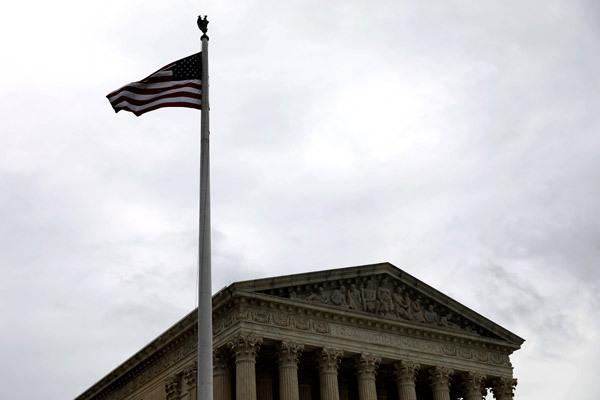 CNS photo/Andrew Kelly, Reuters
A flag flies in the wind next to the U.S. Supreme Court in Washington Aug. 29, 2020.

CNS photo/Andrew Kelly, Reuters
A flag flies in the wind next to the U.S. Supreme Court in Washington Aug. 29, 2020.

Read more about how a chemical abortion can be reversed:

WASHINGTON (CNS) -- The U.S. Supreme Court is temporarily allowing drugs used to medically induce abortions to be mailed or delivered without requiring the recipient to make a doctor's visit during the coronavirus pandemic.

In an unsigned order Oct. 8, the nation's high court rejected an emergency appeal from the Trump administration to reinstate a U.S. Food and Drug Administration rule requiring in-person visits to a hospital or clinic to pick up these pills. The requirements were suspended by a federal district court judge this summer due to the pandemic.

The high court ordered that the federal judge in Maryland who made the ruling on the drug's distribution to "promptly consider" within 40 days whether this ruling should be withdrawn or amended. The FDA, in August, had asked the Supreme Court to block the district court's order while it appealed it.

The drug in question, Mifeprex, is the brand name for mifepristone, also called RU-486, which is used to end pregnancies during the first 10 weeks. FDA regulations have required patients to receive the drug in person after signing a form acknowledging risks associated with it.

Catholic Church leaders have been vocal in their opposition to this drug since it was given FDA approval in 2000 and in 2016 when the FDA relaxed rules for its use, saying it could be administered with fewer visits to a doctor.

This case about how women can obtain these drugs started with a challenge to their distribution requirements made earlier this year by the American College of Obstetricians and Gynecologists. The group argued the in-person visits to obtain these pills during a pandemic violated the Constitution by creating a substantial obstacle to receiving an abortion.

U.S. District Judge Theodore Chuang in Maryland agreed with the appeal and barred the FDA from enforcing these requirements. The U.S. Court of Appeals for the 4th Circuit rejected the FDA's request to put the judge's order on hold during appeals of the decision.

In the Supreme Court's one-paragraph order, it said the government found the federal court's order too broad because it applies across the United States even if COVID-19 rates are better in some states. The justices said they needed more information to make a decision and therefore put the government's request on hold.

Justice Samuel Alito dissented from decision, noting in an opinion joined by Justice Clarence Thomas that there is "no legally sound reason for this unusual disposition" of the FDA's request. He also said the federal appeals court judge "saw the pandemic as a ground for expanding the abortion right recognized in Roe v. Wade."

Alito said the court's majority had been inconsistent in its rulings on pandemic-related cases.

"In response to the pandemic, state and local officials have imposed unprecedented restrictions on personal liberty, including severe limitations on First Amendment rights," he wrote. "Officials have drastically limited speech, banning or restricting public speeches, lectures, meetings and rallies. The free exercise of religion also has suffered previously unimaginable restraints, and this court has stood by while that has occurred."

A post in scotusblog, a blog that covers the Supreme Court, said: "There is no way to know why the justices took so long to act on the FDA's request, or why they opted to take the unusual step of sending the case back to the district court rather than granting or denying the request outright."

It speculated the order might reflect a compromise since the court now only has eight members and by the time the district court rules on the government's motion and the case returns to the Supreme Court, it could have its ninth member.

Read more about how a chemical abortion can be reversed: