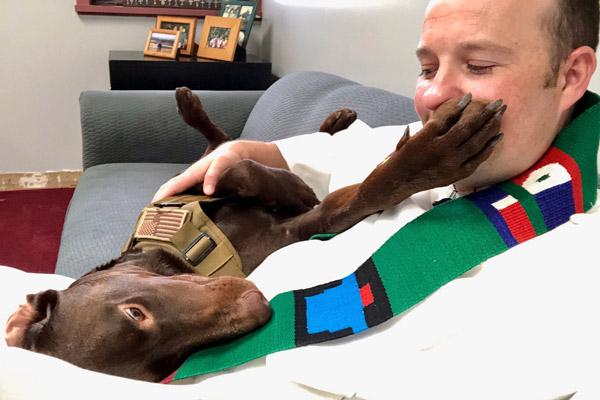 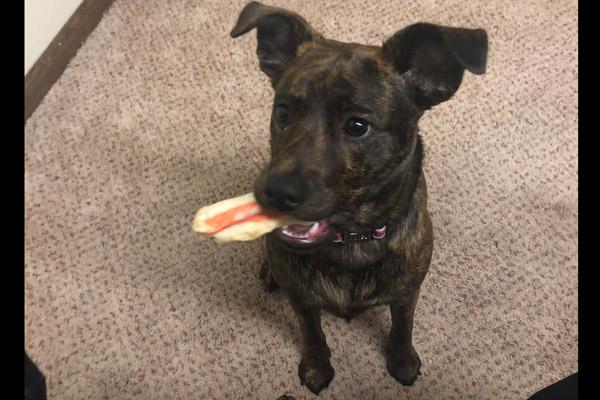 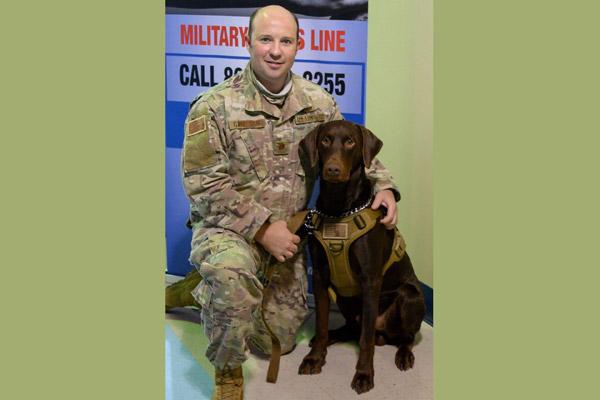 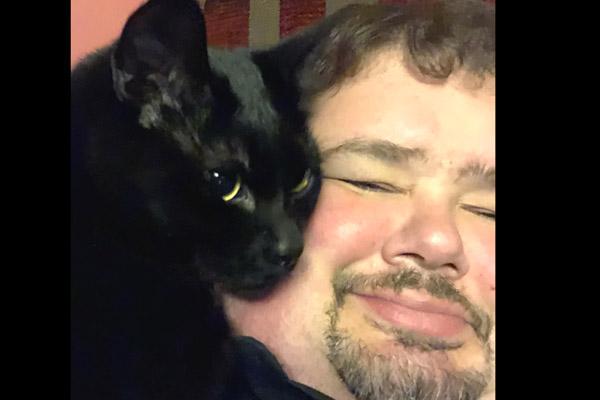 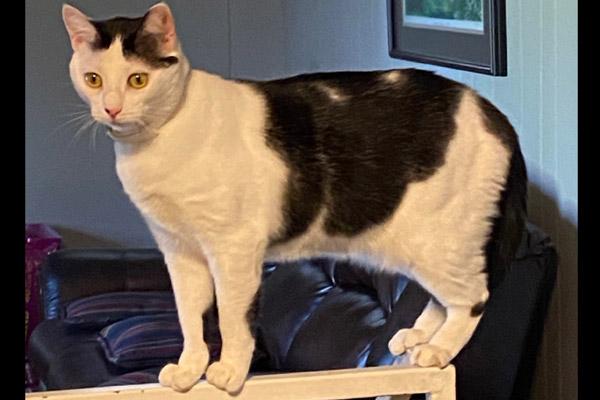 Pastors throughout the state say pets bring peace, laughter into their lives 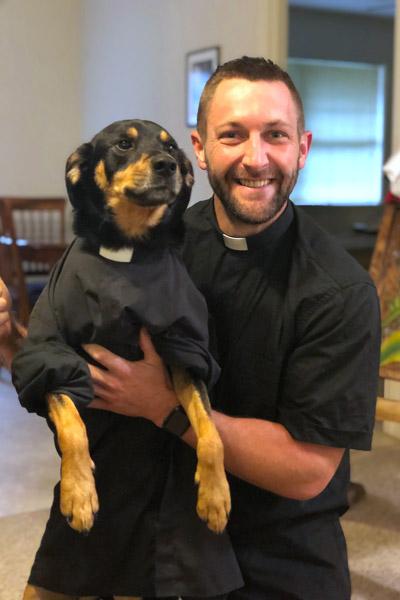 As the legend goes, St. Francis of Assisi tamed the vicious wolf of Gubbio in the Italian province of Umbria. The wolf had been terrorizing villagers, but in the name of God, Francis commanded the wolf to stop its attacks. A pact was then formed with the wolf, who had turned as docile as a pet, that the villagers would care for the creature.

“I think about that a lot as I look to St. Francis. He had that really deep understanding that animals are part of God’s creation and we should do our part in caring for them,” said Father Luke Womack, pastor of St. Francis of Assisi Church in Fairfield Bay.

He understands the notion well, as his own little “wolf” -- rather, his American-staffordshire terrier-pomeranian-labrador-Australian-cattle-dog mix Luna -- does a fair bit of terrorizing, though not to people, but always to an unsuspecting stuffed toy.

“Once she tears them open and tears everything out and eats enough stuffing to throw it up in the next couple of days, I’ll throw it in the trash, but we’ve always got a toy. She’ll run back and forth in the house. We’re playing with her frog right now,” Father Womack said proudly while sharing stories of how Luna has impacted his life with Arkansas Catholic.

While priests live a life devoted to God and his people, some have opened their hearts to a pet, to devote even more of their life to God’s creation and receive unconditional love in return.

For Father Stephen Gadberry, it wasn’t a question of if he’d get a dog, but when. Growing up on a farm in Wynne, he was accustomed to the family dogs running around the property.

“From my time in the military, then subsequently my eight years in seminary, your heart grows fond of all those things from home,” he said.

In the summer of 2017, as pastor of St. Mary Church in Batesville and St. Cecilia in Newport, he went to the Independence County Humane Society and first saw a six-month-old collie mix he would name Murph. He was sitting in the back of a kennel where another young pup was barking and jumping. When the shelter worker let the rambunctious puppy out to run in the yard, “Murph just watched that crazy dog run out. Murph stood up real calmly, walked up to the gate like, ‘This guy’s gone, now can we talk,’” Father Gadberry said.

Now 3 years old, “Murph is very disciplined, very athletic, very fast. He’ll run himself to death playing with the ball and frisbee,” he said. His best friend is Shorty, a 3-year-old beagle mix previously owned by a parishioner, who Father Gadberry adopted.

Father Shaun Wesley also grew up on a farm but was drawn to the independence of cats.

“Their affection is more a decision on their part where a dog it’s more their nature to be affectionate to everyone,” he said.

He has two 4-year-old black bobtail cats -- Jude and Maxine -- named after his great-grandparents.

“I wanted cats that color so if they rub on me when I’m in my priest clothes, that doesn’t show up,” he laughed.

While he initially got them to assist with mouse problems on the grounds of his parishes St. Rose of Lima Church in Carlisle and Sts. Cyril and Methodius Church in Slovak, they quickly “turned into my babies,” becoming inside cats at the rectory.

“They do bring me company. Just the fact that there’s always other life in the house even though it’s not human life. Jude, he’ll crawl up and fall asleep on top of me, on my head,” he said. “With Maxine, it’s always on her own terms … but if I’m lying on the couch she’ll climb on me and want me to pet her belly.”

While they don’t sleep with him -- each weighing 15 pounds -- they know the sound of his morning alarm.

“If I don’t open my door soon enough, Jude will start scratching on the bedroom door to get in,” he said.

Some priests have had a long history of owning pets, including Father Paul Worm. Throughout his 32 years as a priest, he has had five cats. He adopted siblings Francisco, a 20-pound black cat, and Jacinta, a 13-pound tuxedo cat -- both named after the saints of Fatima, as he is pastor of Our Lady of Fatima in Benton -- from a rescue in Hot Springs in 2018.

While Francisco is more shy around strangers, Jacinta “has been on my lap ever since,” and rules the house. He also feeds outside cats.

“My middle name is Francis, so I’ve always loved animals. Cats make the best companions for me as far as a priest with my schedule,” Father Worm said. “... I’ve met people who have come to be people of faith because of our talking about pets.”

Since being ordained 16 years ago, Father Matt Garrison, pastor of Sacred Heart of Mary Church in Barling and Sts. Sabina and Mary Church in Jenny Lind, has fallen for puppy eyes three times -- first with lab Baruch in 2004 and then with one of Baruch’s sons, Jonah, in 2009 and Cletus, whom he adopted in Helena. After Baruch’s death two years before, a friend convinced him to see the lab-weimaraner-doberman mix puppy the day after Christmas in 2018.

“He came right up to me and sat right in front of me and put his paws in my lap and I melted. I told him to pack his bags and let’s go,” he said.

As a certified therapy dog, Cletus has helped countless veterans suffering from PTSD. Father Garrison, an Air Force chaplain, has served in the Air National Guard for almost 12 years.

“I deal directly with a lot of people who are on the front lines of intel and drone control …  I credit him with several life saves,” he said. “There have been people who have been in some dark places, they don’t really want to talk with a person, but they have an opportunity for Cletus to curl up in their lap and spend some time with him. Their heart rate drops, they calm down and are ready to talk and spill all the stresses of life, sometimes those stresses, stressors have built up to the point they may be suicidal and ready to implode.”

Cletus’ training has also been a godsend for Father Garrison, who had to put his 10-year-old dog Jonah to sleep because of bone cancer June 17.

Father Womack adopted Luna, who will be two years old this month, from the Garland County Humane Society when she was just a puppy.

“I have to think about my parishioners, but all of those decisions are relegated to the work of ministry but with her, it’s I have to think of somebody, another creature, other than myself, in my personal life. So that’s been really important for me,” he said.

While serving at an older parish, having the companionship of Luna is a gift, whether she’s sleeping next to him or mischievously hiding a bone under his pillow.

“She loves going on walks. I try to walk her around the property around the afternoon and evening time here in Fairfield,” as well as off-leash on his parents' 17 acres near Lake Catherine in Hot Springs. “She’s really good about coming to me. I’m really protective of her; my mother thinks I’m too protective. I’m yelling at her, calling her name if she gets out of my sight for more than five seconds.”

Father Gadberry said his dogs always remind him to not turn inward with stress and worry.

“They get me out of myself. It’s not so much the attention they give me, it’s the little attention they require, which isn’t a ton. It's enough to slap me in the face -- give me food, give me water. Oh yeah, your life is not about you,” he said.

When Father Garrison first got Baruch, it was his intention that he’d stay an outside dog, but his dogs have become “part of the family.”

“It took about five minutes for him to crawl into my heart and get his place in bed and on the couch, in the house. He was quickly way more than a pet, he was a best friend,” he said.

While pets can benefit a person’s mental health, they have given their owners an extra boost of companionship during the COVID-19 pandemic.

“Especially during the COVID shutdown, they've helped keep me sane,” Father Wesley said. “When they’re there, I never feel by myself. I talk to them and they ‘talk’ to me.”

Are you a dog or cat?

While their time on this earth is short, all living creatures can teach us something about the creator.

“I had an animal-related life-changing encounter in seminary,” Father Gadberry said. “I was moaning and groaning about my world falling apart. The priest slowly got off topic and started talking about dogs and cats.”

Father Gadberry told the priest he had nothing against cats, but preferred dogs because “they’re faithful, always happy to see you.” But with cats, “they want to do everything on their own. They just come when they need something.”

So the priest asked, something for all faithful to ponder: “‘Before the Lord, are you a dog or a cat?’”

“Since then, I have a better respect for cats because they had a role in my conversion,” he said.