Because animals were created by God, priest says it is a sin to abuse them 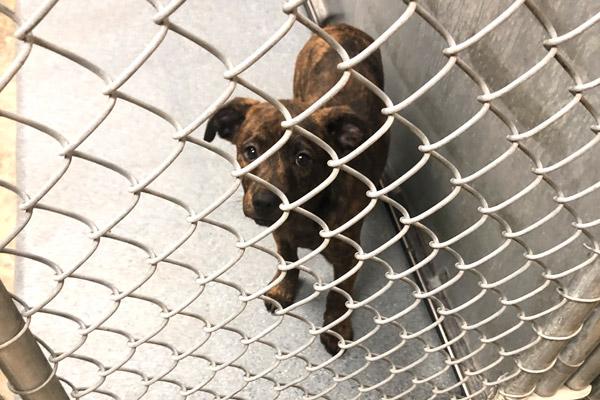 Courtesy Father Luke Womack
Father Luke Womack snapped this photo of his dog Luna at the Garland County Humane Society Jan. 3, 2019, the day he adopted her. He said having a pet to care for has been important in his personal life.

Courtesy Father Luke Womack
Father Luke Womack snapped this photo of his dog Luna at the Garland County Humane Society Jan. 3, 2019, the day he adopted her. He said having a pet to care for has been important in his personal life.

In Pope Francis’ 2015 encyclical “Laudato Si’, on Care for Our Common Home,” he pointed to St. Francis of Assisi’s example, in that “whenever he would gaze at the sun, the moon or the smallest of animals, he burst into song, drawing all other creatures into his praise.”

The pope explained it was not just  an “intellectual appreciation,” but that in the world around him “each and every creature was a sister united to him by bonds of affection. That is why he felt called to care for all that exists.”

In 2019, Arkansas was ranked 34th in the U.S. by the nonprofit Animal Legal Defense Fund for its lack of animal cruelty laws, particularly having no felony charges for abandonment or neglect; an ag-gag law that allows businesses to sue whistleblowers for exposing abuses on farms or other businesses; and because an agency or department is not required to report suspicions of animal cruelty.

In 2019, Arkansas House Bill 1778 failed on the House floor, which called for greater penalties for animal abusers. It would have upped a third conviction of cruelty against a dog or cat to a Class D felony, which is now a misdemeanor under existing law.

Rep. Jim Sorvillo of Little Rock, who sponsored the bill, told KATV when the bill failed, “Nationally, we are known for the fact that we allow animal abuse. What disappoints me is that our representatives, our elected officials would not stand up for something that Arkansans really want.”

There is also a connection between animal and human abuse. The National Link Coalition, an advocacy group that researches the links between various types of abuse, pointed to research by the National Coalition of Domestic Violence which stated 71 percent of domestic violence victims who owned pets reported their abuser had “threatened, injured or killed family pets.” It also stated 87 percent of pet abuse was committed in the presence of a partner being abused, for either revenge or control.

In Arkansas, puppy mills are common, characterized as high-volume dog breeding facilities that overbreed females and ignore basic care for the animals. Two puppy mills in Arkansas made the 2020 Humane Society of the United States “Horrible Hundred” list of worst puppy mills in the country.

Father Luke Womack said, “That’s particularly emotional for me because of adopting Luna. If I hadn’t adopted her, who knows. She may have been adopted, she may not have. The reason that we need to love and care for our pets is because they provide us with that unconditional love.”

While it can be a problem to assign human characteristics to animals, Father Stephen Gadberry said “they’re not just objects, they’re living creatures.”

“To be pro-life means to support the whole cycle of life and it’s not just human cycles of life. We require food, shelter, community; it’s the life of other people and other things, plants and animals, all livelihood,” he said, adding, “All of creation is in Christ so that would include all of the fallen world, plants, animals and people. So at the end of time all of creation will be glorified if we believe in the body and the soul, the soul lives on. There's a glorification. That would include plants and animals in the plan of salvation.”