Priests discuss the emotions, grief of putting their beloved pets to sleep 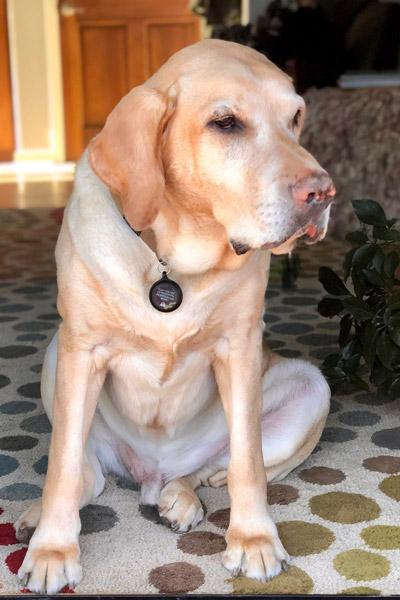 Pet bereavement counselor Maryglenn Warnock said, “There is no right or wrong way to grieve. Grief is intensely personal. You may feel overwhelmed, sad, angry, despondent, numb, guilt-ridden, even relieved. It’s all normal.”

It was all the emotions Father Matthew Garrison, pastor of Sacred Heart of Mary Church in Barling and Sts. Sabina and Mary Church in Jenny Lind, had to face this summer and Father Paul Worm, pastor of Our Lady of Fatima in Benton, went through in 2018.

For almost 11 years, Father Garrison made treasured memories with his lab Jonah.

“He was very funny. One of the first hilarious memories I have of him, I left him with Father Andy Smith while I was at Guard drill in January after I got him, so he was about 5 months old. Father Andy sent me a text with a picture that said ‘Your damn dog.’ He was covered with mud, he escaped him and ran in the backyard. He was just sitting on the sidewalk kind of looking away like, ‘That was the best mud puddle ever’ … it’s been a picture we have absolutely cherished.”

Despite his size, he was a lap dog or right by Father Garrison’s side. After returning from six weeks of chaplain training, “Jonah jumped on top of my shoulders, all four paws on top of my shoulders and was licking my head, just super, super excited to see me. He was always that way when I left for any length of time.”

On June 17, he said goodbye to his best friend. Father Garrison said calling the vet to have Jonah put to sleep after a battle with bone cancer was “surreal … It makes me tear up thinking about it. I couldn't get the words out of my mouth.”

The veterinarian came to the house the next day, after Father Garrison had spent his dog’s remaining hours holding him.

“I think really the most difficult thing was just trying to make sure I was making the right decision. I didn’t want to cut his life short, but I didn't want to prolong the pain. I knew I had to make that decision, and as crazy as it might sound to people that aren’t dog people, Jonah and I had lots of conversations. I told him he’d have to let me know when it was time and he did,” he said.

After losing his Persian cat Merry in 2015, Father Paul Worm said he developed an even closer connection with Pippin, Merry’s brother.

“Pippin was just a very docile and easy going cat who loved me and if you know Persians they’re very fluffy,” he said. “He was just sort of a constant fixture when I’d sit and pray.”

Once, the cat was accidentally closed in a kitchen cabinet for a few hours and when he opened it “he stood there looking at me,” Father Worm laughed.

Pippin came with him on the move from Texarkana to Benton and at 15 years old, “I could he was near the end of his life and not enjoying life anymore.” He had him put to sleep on Martin Luther King Day 2018.

“It was one of the hardest things I’ve ever done in my life. I was burying him and it started to snow. It did snow that evening, so school was canceled for a couple of days. I was able to have like a three-day mourning period where I did a lot of weeping and missing Pippin,” he said.

For other pet owners who struggle with the grief of saying goodbye to their companion, Father Garrison said to “keep their memory alive.”

“Cherish the good times. Even with Cletus (his other lab mix) his lifespan is going to be pretty short, it’s just the nature of dogs but don’t let that be the reason not to get a dog,” Father Garrison said. “Get a dog because they need somebody to love them in the time they have. They’re sure to give a lot more love than we can give in that short amount of time.”

Father Garrison and Father Worm both agreed, there’s no Church teaching that states pets are not in heaven. Father Worm said because animals are a part of the kingdom of God, “I’m sort of expecting when I go to heaven, if I make it, for my pets to be waiting for me.”

“I remember the nuns in school saying heaven is perfect happiness and for me, dogs are certainly a part of perfect happiness. So there’s no reason to believe they’re not,” Father Garrison said.

“There was a little girl who came down the steps at the Cathedral (in Little Rock). She told me her dog died and asked, ‘Is my dog in heaven?’ The only pastoral response to that was ‘yes.’”

Mary remains with you in your darkest moments