Teams form for Catholic seventh, eighth graders to prepare them for high school 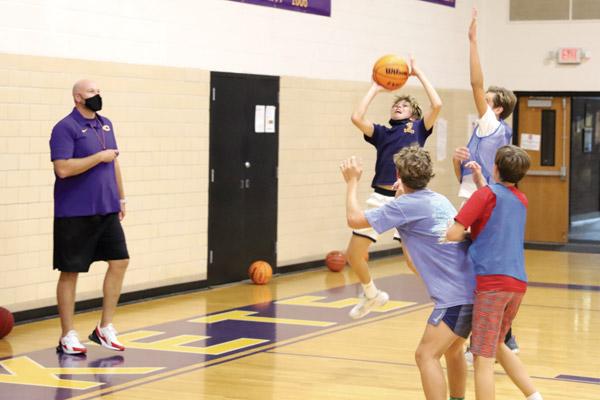 Dwain Hebda
Head Coach Ryan Thursby monitors the action during a recent practice of the Firecrackers basketball team. The new program gives players in Catholic schools a chance to play against tougher competition.

Dwain Hebda
Head Coach Ryan Thursby monitors the action during a recent practice of the Firecrackers basketball team. The new program gives players in Catholic schools a chance to play against tougher competition.

“Everything is competition boys!” he shouts to the seventh- and eighth-grade basketball players racing back and forth. “Everything!”

Thursby and his coaching lieutenants, Nick Collier and Lane England, are leading a new team, the Firecrackers (technically Central Arkansas Catholic Consolidated), a collection of boys assembled from parochial schools throughout Central Arkansas. The first game of the season is just a few weeks away and with the COVID-19 pandemic severely curtailing their practice time since spring tryouts, the coaches are laying it on full throttle.

“We were planning on having these boys play together in the summer and play in tournaments,” Thursby said. “We’d hoped to try to start building the team camaraderie and start teaching them some of the offense and some of the basic fundamentals that would carry over this year. But COVID hit and the first time we really started getting together was a couple of weeks ago.

“We’d hoped to try to start ... teaching them some of the offense and some of the basic fundamentals that would carry over this year. But COVID hit and the first time we really started getting together was a couple of weeks ago.” Ryan Thursby, head coach of the Firecrackers basketball team

“We did get together in the summer doing some outside, social-distance fundamentals and some strength training stuff. But it was really minimal in the grand scheme of things.”

Reminders of the coronavirus are everywhere throughout the practice. Players run through drills wearing masks, as do the coaches on the sidelines. Thursby drops in to impart instructions only at a distance. It’s a surreal sign of the times.

“We hadn’t started practice until we got clearance and we just followed the guidelines with the Arkansas Activities Association (AAA),” said Tiago Lewis, the head coach for the counterpart girls basketball team, the Mounties, which practices across town at the Christ the King School gym.

“I think our first drill session started in June. We started with so many kids and then it just slowly opened up from there.”

The Firecrackers and Mounties basketball programs, along with a volleyball team also called the Mounties coached by Valaeria Malak and Jessica Crow, were born out of a desire to provide Catholic middle school athletes the opportunity to face a higher level of competition than the longstanding parochial league.

“We’ve always encouraged everybody to play sports at Holy Souls and all the parochial schools,” said Collier, Holy Souls’ athletic director. “But in doing so, sometimes there’s been a lack of competition and a lack of having kids being able and ready to play in high school. The purpose of this is for those kids that want to play in a more competitive league and are planning to play in high school. This lets those kids get into a more competitive environment sooner to help them prepare for high school athletics.”

These new teams for seventh and eighth graders are open only to Catholic school students, while the Little Rock Parochial League is still open to a couple of other small private schools in the city as well. Students in fifth to eighth grades still looking to play basketball or volleyball but in a little more relaxed format can still join the Parochial League.

Play calling, defensive schemes and drills mimic what the players will experience at Mount St. Mary Academy and Catholic High, with the hope of lessening the shock of transitioning to the high school programs. And, CACC players get a chance to develop the team chemistry and cohesiveness that opposing programs take for granted.

“There was just such a disconnect between the players who had been playing together for years at Conway, Cabot and those big schools,” said Thursby, who’s been an assistant in the Catholic High basketball program for two years. “And then we go from where all of our talent is split up, playing against each other (in the parochial league) to playing in the 6A/7A Conference. We just couldn’t compete.

“The idea behind this was, let’s start getting these guys together a little bit sooner and let them start learning to play together. They’d start to learn Catholic’s system and, hopefully, it would eventually make the high school program more successful.”

The strategy follows the blueprint drawn by Firecrackers football, which combined players from several Catholic schools to compete in AAA-sanctioned contests against other junior highs. Last year, in its first season, the team won the league championship, setting a high bar for the new squads. Time will tell where this year’s basketball crop shakes out, of course, as Thursby said the next-level competition will demand the best of his squads.

Meanwhile Lewis, assisted by Sarah Wherry, is looking for big things out of the Mounties, despite the fact that he has only six eighth graders on the older team.

“I think they’re going to win the whole thing,” he said. “The majority of the (older) team will be seventh graders, but those seventh-grade girls, some of them are pretty skilled. They’ll definitely help with that eighth-grade bunch. I think they’ll have a good chance to win.”

But no matter what happens in the short term, Lewis said the goal is to create more competitive programs over time for Little Rock’s two Catholic high schools.

“I’m trying to make these girls love the game mainly so they’ll want to play when they get to high school, either play volleyball and basketball or just play basketball,” he said. “My main objective is to have these girls ready for high school ball, especially Mount St. Mary’s.”