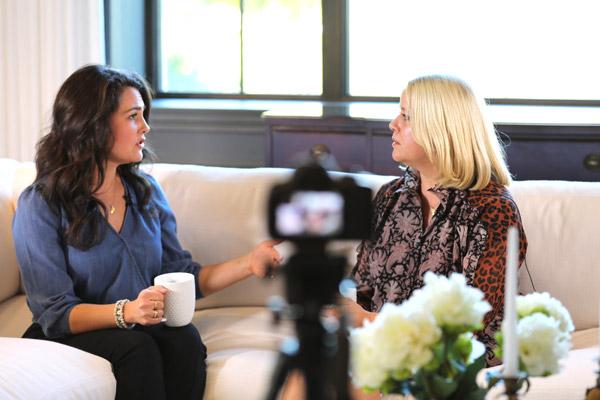 Courtesy Bellator Catholic Media
Fran Jaeger (left) and Tracy Eddy chat during a promotional video filmed in fall 2018 to promote their website, The Bellator Society, a Catholic evangelization initiative. They have several Catholic contributors from Arkansas.

Courtesy Bellator Catholic Media
Fran Jaeger (left) and Tracy Eddy chat during a promotional video filmed in fall 2018 to promote their website, The Bellator Society, a Catholic evangelization initiative. They have several Catholic contributors from Arkansas.

Read more about Catholics writing about their faith:

First book a journey of faith for Debbie Eckert of Conway

Before the sun rose, Little Rock neighbors Tracy Eddy and Franchelle “Fran” Jaeger would often walk, praying the rosary together and discussing their faith.

“We just had this kinship of our faith that was really just the foundation for the beautiful friendship. And in those walks, we kind of solved all the problems of the world,” Jaeger said tongue in cheek, but also knowing those walks gave focus to the “burgeoning idea that we both had a desire to make Catholicism and the beauty of our faith more visible and palatable.”

Throughout the five years that the two Arkansas natives lived near each other and worshiped at Christ the King Church in Little Rock with their families, and then even when they moved to different states, their conversations became the genesis for The Bellator Society, an online Catholic evangelization initiative launched during Advent 2018. The website, bellatorsociety.com, produces a blog, podcast, videos, religious resources and a gift shop.

“We wanted everyday Catholics proud to be everyday Catholics, to have good content to read,” said Tracy Eddy, now of Scottsdale, Ariz. “I think there’s a sense sometimes to be a good Catholic you have to be a daily communicant and be in the confession line weekly or bimonthly. There are a lot of people who felt left out or didn’t have a home … they love the Lord, the Church, but we feel like how do we work our faith into our life at the car line, the school runs, and just in community? That’s what we wanted to go for.”

The name Bellator, Latin for “warrior,” was purposeful. The women wanted to make The Bellator Society a group of warriors for Christ, a mission to “break down the barriers of misunderstanding” and the way the world perceives the faith amid the scandals and trials of recent years, Jaeger said, who now lives in Nashville, Tenn.

The stay-at-home mothers and wives rely on volunteer contributions once a month from more than 60 people, a mix of women and men. Admittedly, it has been mistaken for a women’s ministry, but there is something for everyone. The contributors are from different walks of life, including Catholics who are married, divorced, widowed, single and parents.

“We wanted to include travel, art, literature, stay-at-home mom homemaking and cooking,” Eddy said. “We wanted it to be broad so everyone could find something.”

Christ the King parishioner Angie Elser has been writing for the society’s blog since it began. Prompts are sent out once a month to get writers thinking of a common topic, though they can also submit their own ideas. Elser said she’s been able to write on everything from a Holy Thursday piece on the Eucharist, the love of Christ and the priesthood -- the mother of six has one ordained son, Father Stephen Elser, and son Christopher Elser is in seminary -- to loving laundry.

“This time last year I fell off a ladder. I needed to do a little more self reflection on things about how I should think before I do, that I have limitations. That was very personal, I wound up in the ER. I wrote my personal reflection from that,” Elser said.

Erin Pohlemier, a mother of six and parishioner of St. Joseph Church in Fayetteville, has written for The Bellator Society for about a year and half, with her first piece part of a series on the cross.

“They were interested in kind of sharing my aspect of embracing the cross. At that point my dad was in what turned out to be his final weeks of cancer. I wrote a piece on Simon of Cyrene ... and how we’re asked to carry a cross we didn’t ask to carry.”

She writes from a place of highs and lows in her life, creating relatable content.

“I think really anyone who is Catholic or non-Catholic, or anyone who is interested in learning, learning about people’s stories and what is important to people,” can gain spiritual fruits from the society’s initiative.

Eddy said the content can be a “tiny escape” from the dominating negativity in the world.

“We’re not just a Church institution. We are in every facet of society; in the healthcare field to science to the art world to morals and ethics, so we’ve always said we want to be the cheerleaders of all the other wonderful things the Church and ministries are doing,” she said.

Read more about Catholics writing about their faith:

First book a journey of faith for Debbie Eckert of Conway