National poll found half of Americans say they are anxious 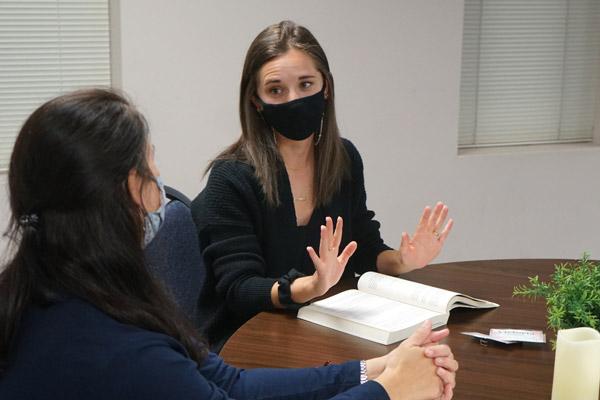 When the COVID-19 pandemic hit Arkansas in March, Victoria Guillory felt as if she was holding her breath. With new information coming out daily, as medical experts learned more while trying to combat the voices of the uninformed, she felt “if I walk outside I’m basically going to get sick is basically what I thought at the beginning.”

“Physically, I kind of felt my heart beating a little bit, racing, all the thoughts start running through my head,” the 29-year-old said.

Rather than stay in that anxious state, she turned to God.

“I need to stop and start praying ... Once I just stop and take some breaths and focus on God, even just calling out and saying, ‘God I need your help. I need your calm and your peace.’ I feel like I can breathe.”

Dr. Sherry Simon, a clinical psychologist and member of Christ the King Church in Little Rock, pointed to a summer survey from the National Center for Health that nearly 30 percent of people have clinical depression, compared to 6 percent at this time last year, as well as 36 percent feeling more anxious about life, with about 8 percent last year.

Though Catholics and all people of faith experience the stress of the world, there are healthy ways of coping including leaning on Scripture, prayer and, when necessary, seeking professional help.

A national poll released in March by the American Psychiatric Association stated almost half of Americans, 48 percent, were anxious about contracting COVID-19 and 36 percent of Americans said it was having a serious impact on their mental health.

Simon said she’s seen an increase in heightened anxiety and depression in her patients, even those with borderline mental health issues.

“It’s a life-threatening virus for many vulnerable people. That alone is enough to make you anxious and upset,” Simon said, along with increased isolation for safety, the stress of a pandemic becoming politicized and aggressive commentary on social media. “I think that people struggle with changing their entire lifestyles … It wasn’t temporary; we had to adjust to this new normal. I think people started experiencing these feelings of being out of control, which leads to anxiety and depression.”

Simon said people suffering an extreme panic or anxiety attack can have trouble breathing, sweat and become dizzy. But most people also display anxiety in other ways, including suddenly becoming more controlling in a relationship to gain a sense of control.

“Anxiety is when you tend to worry the smallest of details or feeling like you have to have control over more things in your life. Just because you haven't wiped all your counters down or mowed your lawn perfectly, you get more anxious over the little things, and may have anxiety over something bigger than that.” (See sidebar for coping tips.)

She said prayer can make a significant difference in a person of faith and attending Mass can give “spiritual strength.”

However, using faith as an excuse to neglect proper precautions, including physical distancing and mask wearing, is not faith, but putting others at risk.

“I don’t think we should go around feeling anxious and terrified that every minute we’re going to get this disease,” Simon said. “We can’t live that way. And there our faith comes in and knowing God has control of all of this even though we do not right now. We must have faith we’re going to get through this. However, with faith also comes common sense and how are we going to get past this virus eventually? God wants us to have common sense, to help our neighbor.”

Father Jerome Kodell, OSB, a spiritual director and former abbot of Subiaco Abbey, said people will feel anxious when they fill themselves up with negative things. Whether it’s constant breaking news, listening to political commentators 24/7 or scrolling social media too much, our world is “constantly bombarding us with negative messages.”

“Without Christ, the world is a very pessimistic place,” Father Kodell said. “People somehow need to find a way to empty that out” through spiritual videos, reading or silence.

“It’s like injecting yourself with poison to keep feeding that stuff into your mind … nothing really changes for those who have faith,” if the focus is on God, he said.

The faithful can hold onto the truth despite so many untruths in the world by praying a rosary, turning to Scripture and different forms of meditative prayer like Lectio Divina and spiritual readings. Father Kodell pointed to Bishop Robert Barron’s “Word on Fire” materials and also “Interior Freedom,” a book by Father Jacques Philippe.

“Get into yourself so your eyes see the world the way God does,” he said.

In order to distinguish the hopeful voice of God rather than the despairing voice of Satan, it takes being grounded.

“You stay in touch with the sources you know are true: Scriptures, teachings of the Church, prayer. You become sort of a tuning fork,” and able to listen for the discordant note, Father Kodell said. “You know it doesn’t fit. If you don’t have priority for the things that are really lifegiving and true, you’re just at the mercy of the next message.”

Each meeting starts with Mass, though the society is also open to non-Catholics.

“I’ve heard from people over the years that starting with Mass has been very, very helpful to them,” Cargile said.

The discussions move to whatever anyone needs in the moment. And it’s a mix of people at different points in their faith journey, something that creates a healthy balance of hope, said Cargile, a parishioner at Our Lady of Good Counsel Church in Little Rock.

“Things will come up like for me personally. One is I don’t feel like God loves me. And is it the bipolar (disorder) that makes me think that? It’s hard to see who comes first, the chicken or the egg,” Cargile said, who lives with bipolar disorder.

The group has met for about five years but have not met in person since the pandemic.

But they have stayed in touch, a help for Cargile in a particularly stressful year. She likened 2020 to having a gray coloring book and gray crayons, in that day-to-day life has lost its vibrancy.

The simplest and most effective prayer for her has been, “‘Thy will be done, but help me to deal with whatever your will is because your will is pretty scary sometimes and I don’t know how to deal with it,’” she said.

Cargile said she’s coped by listening to podcasts, talking weekly with a counselor and recognizing that she has a support group and working through the discomfort of asking for help. If a friend or loved one struggles with their mental health, it’s important to let them know their feelings are valid without trying to fix something unfixable. It’s more than listening, but being heard, Cargile said.

“How refreshing when someone says, ‘What does that feel like for you? How do you feel today?’” she said. “And don’t wait for the person to come to you to ask for help. Because it’s so hard. It’s so scary.”

Victoria Guillory, who converted to Catholicism in 2018 after marrying her husband Michael, does not have a diagnosed illness but has always struggled with fear, worry and anxiety. It has heightened during the pandemic and the election season. She was concerned about asking her employer to work from home -- which she ultimately did -- and when she began working from home she found, “I felt very disconnected from everything and then, ‘now what should I do?’”

However, she turned the negative thoughts toward God, learning to surrender and let go while communicating her feelings better with her husband, who gave her perspective on bringing her anxiety to prayer.

“I need to just fully soak myself and infuse myself in God and spiritual things and fully engross myself in that to really help with my mindset,” she said.

An avid podcast listener, she found Proverbs 31 Ministries, a Christian-based podcast where she discovered blogger Nicki Koziarz’s “See over prayers,” reading specific Scriptures about feelings a person is experiencing and asking God to “see over” whatever they’re feeling. Guillory said 1 Peter 5:6-7 and Philippians 4:8 are ones she’s repeated when experiencing anxiety and asks God to “see over my anxious thoughts today.”

“I feel like I can breathe,” she said. “When I do that, I can just take a sigh and just immediate relief. It’s a very physical thing. When I take the time to stop and just pray, it’s not as bad as what I thought it was.”