Smaller football team a winning decision for school this season 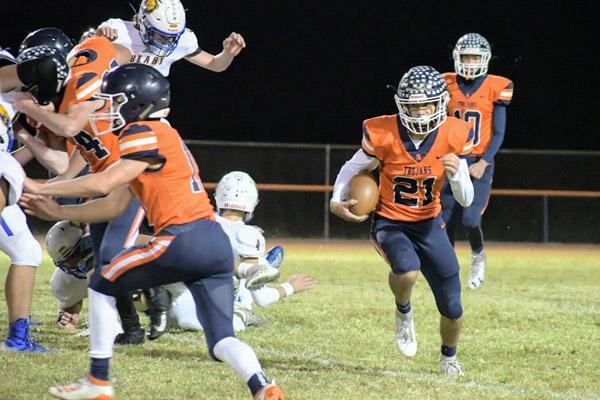 Robin Schluterman, Subiaco Academy
Subiaco senior running back Payne Lee clears the line of scrimmage before hitting the gas on an 80-yard touchdown run in the first half against the Decatur Bulldogs Oct. 9.

Robin Schluterman, Subiaco Academy
Subiaco senior running back Payne Lee clears the line of scrimmage before hitting the gas on an 80-yard touchdown run in the first half against the Decatur Bulldogs Oct. 9.

Like every educational institution in 2020, Subiaco Academy has had to make a lot of adjustments to the way it operates in the era of COVID-19, from social distancing protocols to distance learning.

So when Michael Berry, head football coach and athletic director, gathered the football team this spring for an announcement via Zoom, it should have come as no surprise that it would include a twist. The school would compete in eight-man football come fall.

"In March, everybody went home (because of COVID) and we didn’t opt into eight-man until that first week in April,” he said. “I had to have a virtual team meeting to introduce to my players what was going on. They were all pretty fired up about it.”

Cut-down variations of the game, which include eight-, nine- and six-man configurations, are becoming increasingly popular nationwide. As cost considerations and head injury concerns persist, many football players are finding their way into other sports, making it difficult for smaller schools to field the necessary bodies to be competitive.

Subiaco has had a shrinking football program for several years; this year’s squad had just 19 boys report for practice. That, and an odd Arkansas Activities Association private school rule that dictates the Trojans play up in class from where it should, has meant success has been hard to find on the gridiron. Last year was typical of this trend, as the Trojans enjoyed just two wins versus eight losses. Eight-man football seemed a viable solution.

“It’s been on my radar for a while,” Berry said. “I was curious because we were struggling, looking for a way to be a bit more competitive in football. We’re very competitive in everything else. About four or five years ago Fort Smith Christian decided to go eight-man. I called and talked to their coach and he’s like, ‘Coach, it’s the best thing we’ve ever done.’”

Liking what he heard, Berry spearheaded an effort to switch to eight-man, ultimately petitioning the AAA for inclusion in its program.

Berry may not have had any mass defections at the April announcement, but not everyone was completely sold on the idea to switch.

“At first, I thought this isn’t going to be any fun, it’s just going to take away from the game,” said Adam Ackel, 17, senior offensive lineman and linebacker. “I quickly found out I was wrong and that it’s actually a lot more fun. It’s a lot more fast-paced.”

“I was not too surprised, honestly,” said Payne Lee, senior running back and linebacker. “The past two years, one of our former coaches thought about trying to get it started here. I kind of heard rumors that we might be switching over. When I heard it, I didn’t know how it was going to be, but I was excited that we’d be able to compete this year.”

Getting down to eight men per side commonly eliminates two linemen and, depending on the formation, a skill player on offense and a linebacker on defense. Speed is a great advantage in cut-down football leagues as there are fewer opposing players to elude. Conversely, sound, open-field tackling is also paramount.

Subiaco proved adept at both right out of the gate, thumping Arkansas Christian Academy of Bryant 70-26 in the first game Aug. 28 under the new format. It was a win that made believers out of everyone.

“After we saw how our first game went, how good we could be in eight-man, the team stepped up to another level,” Lee said. “It’s nothing we’ve really felt since I’ve been here. We’ve always had losing seasons and just seeing what the team could do, we thought it’s possible for us to make it all the way to the championship.”

Which is exactly where the team found itself Nov. 6, facing a revenge game against Episcopal Collegiate School on their Little Rock home field. The Wildcats had edged the men of Troy earlier in the year.

“It was definitely the best game that we played all season,” Ackel said. “At one point, someone rolled over on top of my knee while I was standing up, and it knocked me down. I didn’t think I was going to be able to get up, but I just forced myself up and was able to keep going. For the next couple of plays, I barely put any weight on it. After that, I just wasn’t thinking about it anymore.

“And then, about halfway through the third quarter, both my calves cramped up, and I played the rest of the game with cramping. It didn’t matter to me, I just wanted to be in the game and keep putting in everything else that I had.”

Heart and desire aside, it wasn’t meant to be for the 2020 Trojans as they fell in the title game 54-48. But with a healthy turnout for the school’s junior high team and the experience gained by the 8-3 varsity campaign, the future is bright for the program.

“It was nice to make it that far. I know we could have won that game,” Lee said. “A lot of our guys were younger and new to football this year. I was one of the only kids who played varsity football for multiple years, so I was kind of like trying to set a tone. I think they can be a lot better by the time they’re seniors.

“I just want to set a high standard knowing that these guys could get it. I really wanted them to push themselves. I was disappointed we didn’t win it all, but hopefully, it’ll push the guys to win state next season.”