Composers should be credited and paid for works played online 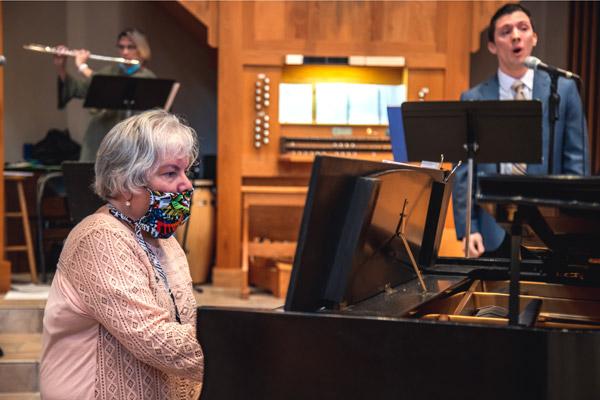 Travis McAfee
Lourdes Montgomery, music director of St. Vincent de Paul Church in Rogers, plays piano for Mass Nov. 22. A composer herself, Montgomery pointed out that it’s against the law to copy or livestream copyrighted music without licensing.

Travis McAfee
Lourdes Montgomery, music director of St. Vincent de Paul Church in Rogers, plays piano for Mass Nov. 22. A composer herself, Montgomery pointed out that it’s against the law to copy or livestream copyrighted music without licensing.

Click here to read a Q&A with a licensing expert at Oregon Catholic Press.

The mass exit from churches in the spring because of the COVID-19 pandemic forced the faithful to get creative. Whether it was mounted cameras or just a cellphone on a tripod, parishes quickly realized the need to livestream Masses for their parishioners as a vital way to keep connected as a faith community.

But was it legal?

For musicians, it’s a tricky question. If a parish pays for missals or hymnals, there is no need to buy a license if the music is going to be strictly sung in church using the book. However, if it’s livestreamed on Facebook, YouTube or another internet platform, copyrighted music requires a podcast streaming license, typically an add-on to an annual reprint license allowing parishes to print copies of copyrighted songs from hymnals or other places. One License, which covers music from more than 340 different publishers, is a popular Catholic music licensing company, offering a pricing scale based on average weekly attendance. The annual cost for 1 to 25 parishioners on average is $118, with an additional $67 for a podcast/streaming license. For a parish of 401 to 700 average attendance, it’s $525 a year plus $125 for streaming.

While it may be a financial strain on some churches to pay for licensing, it’s the legal and moral way.

“Our Church is about social justice, and we need to make sure the people who wrote these songs have royalties from the usage of these songs,” said Elizabeth Reha, one of the music directors at Our Lady of Good Counsel Church in Little Rock. “We’re not living up to our part of social justice if we’re not making sure we’re paying.”

Susej Thompson, faith formation and music director at Our Lady of the Holy Souls Church in Little Rock, said the parish has licensing through Christian Copyright Licensing International (CCLI), which offers contemporary praise and worship music. She said there is an annual fee plus an added fee for livestreaming and printing.

“It’s pretty affordable, if you have a budget to do that. A few extra hundred a year. Then you have to deal with if you use Facebook instead of the other platforms. Even if you have a copyright license to livestream, if Facebook hears copyright music in your feed, they’ll shut off your sound completely,” Thompson said.

She said one of her prayer group meetings was muted, despite her disputing that she had the proper copyright license to play the music.

However, since the pandemic, the social media site has been more accommodating, said Todd Baltz, music technician at St. Paul the Apostle Church in Pocahontas.

“Facebook released a confusing statement this summer that had a lot of houses of worship” concerned about services being muted, but Baltz said most of the time the platform is not heavily restricting church services.

Streaming is nothing new for Baltz, who has been livestreaming Mass at St. Paul for about four years and is licensed with CCLI.

“I’ve added a disclaimer about three to four months ago to the bottom part of my description boxes: ‘Our music is used with copyright permission,’” to further protect against the video being taken down, he said.

Reporting what songs are used at Mass to the licensing company ensures the composer receives royalties.

“When you think about how many songs you’re doing every weekend during the year it more than outweighs the cost,” he said.

Beyond the licensing, Thompson said the logistics of sound quality have been a challenge, as the parish livestreams and has speakers in the church as well as outdoor speakers. She said they are waiting for cameras to be installed to create better quality video.

Reha said Good Counsel uses three different hymnals from GIA Publications and WLP Music. When the parish quickly began streaming their Masses using a smartphone, she said “It was such an emergency, it happened so fast people hadn’t thought about a copyright responsibility.”

The parish did not have a streaming license and pastor Father Greg Luyet noticed an archdiocese who streamed Mass specifically included their music license number on the post. They have since purchased one through One License.

While there was some leeway given early in the pandemic, it’s important for parishes to look into licensing their streaming.

“People need to get onboard now to get their copyrights done and make sure they’re up to date,” Reha said. “... I think it’s a long-term thing for us, as long as COVID lasts, but even longer based on the opportunity if you put money into livestreaming.”

St. Vincent de Paul Church in Rogers has been vigilant with licensing and reporting what music is played, as music director Lourdes Montgomery is a composer herself, represented by Oregon Catholic Press. She worked in liturgical music for 19 years in Miami and 15 in Arkansas. An accomplished bilingual composer of the psalms, her song “Bienaventurados” was performed in 2008 at a papal Mass with Pope Benedict XVI in Washington, D.C.

“It is dangerous for a church not to obtain a license. They can get sued ... It’s against the law to copy music and hand it out without prior permission” or stream it, she said.

Years ago, before One License brought several publishing companies together, each company had their own licenses, which “was such a pain and expensive.”

“I don’t make a living composing music obviously, but it helps,” Montgomery said. “If I want to go out to eat or if I want to give a gift to my children,” it’s extra spending money.

“I probably receive one-hundredth of a penny for every one song. It’s very little, very small percentage. But once it’s used all over the United States, there’s tons of churches and Masses, those add up,” she said, explaining in her latest quarterly report she made $544 from music royalties.

Click here to read a Q&A with a licensing expert at Oregon Catholic Press.

Children in Hot Springs jam out, learn about Scripture