Pyx donated this fall from Bentonville with host inside 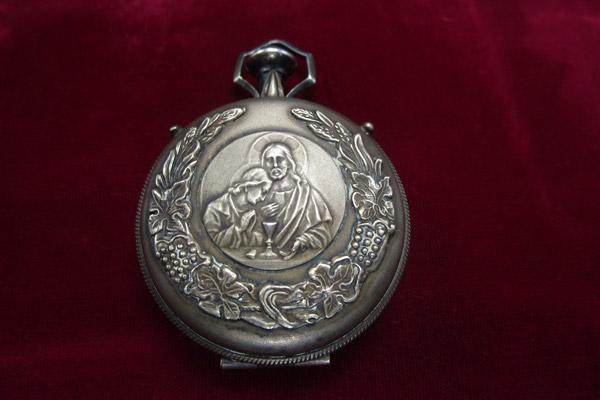 Goodwill Industries of Arkansas
This antique sterling silver pyx was inside a jewelry box donated to a Goodwill store in Bentonville. The pyx had a host inside, which was consumed by Deacon Matt Glover after prayers at the Goodwill headquarters in Little Rock.

Goodwill Industries of Arkansas
This antique sterling silver pyx was inside a jewelry box donated to a Goodwill store in Bentonville. The pyx had a host inside, which was consumed by Deacon Matt Glover after prayers at the Goodwill headquarters in Little Rock.

Read about another unique treasure that was discovered:

When it comes to donations, Goodwill employees in Arkansas have seen it all, from accidental donations of cremains, both human and animal, to a signed script from the movie “Titanic.”

But when an antique sterling silver pyx, a container used to carry holy Communion outside of Mass, arrived at Goodwill headquarters in Little Rock, there was something special inside.

“I was very excited to understand our people, I don’t know what their religious affiliation is, … (recognized) that the consecrated body of Christ needs to be respected,” said Leslie Heizman, vice president of marketing for Goodwill Industries of Arkansas.

Cody Yancey, ecommerce manager for Goodwill, said the pyx came as a donation in Bentonville, found inside a jewelry box. The company does not know who donated it or why one host was inside.

“It’s a mystery. I’m fascinated and I wish I knew more,” Heizman said.

A raised image on the pyx features Jesus and the beloved disciple, John, at the Last Supper.

It was listed on Shopgoodwill.com, the organization’s ecommerce site, in a photo opened with the host inside it. A concerned person outside Arkansas saw the listing and emailed Deacon Matt Glover, chancellor for canonical affairs at the Diocese of Little Rock. He quickly contacted Goodwill.

“They said, ‘We were a little concerned because we didn’t want to throw it away, but we didn’t know what to do,’” Glover said, adding that Goodwill immediately took the photo down, to avoid appearing as if they were selling a host.

Within a few hours on Nov. 3, Glover was at Goodwill to offer prayers and consume the host in private. But Heizman and others wanted to know more.

“I explained to them why it was such an important thing to us; we believe Jesus is truly present in the Eucharist,” he said.

Not trying to make “a show out of it,” Glover offered prayers that a priest would offer at Mass, including “Lord, I am not worthy to receive you, but only say the word and my soul shall be healed.”

“I think it turned into a moment of grace,” he said, as employees stood by respectfully. He added it was an example of evangelization and witness, in that after consuming the host, they prayed together and discussed faith.

“It was a nice moment ecumenically. I don’t think any of them were Catholic necessarily, but we had a shared joint respect for each other’s faith,” he said.

Heizman said it was touching to see the employees praying and being respectful of the moment, which connects with Goodwill’s overall mission of changing lives.

“I think we just have a culture of kindness and appreciation when we receive something we know is of great value,” she said.

The empty pyx sold in the Goodwill online auction for $176 Nov. 10 to Bridgette McQuay, 42, of Lake City, Fla. Though not Catholic, she told Arkansas Catholic she attended Catholic school in kindergarten and first grade, and today attends New Jerusalem Missionary Baptist Church in White Springs.

McQuay, who happens to work as a team lead at Goodwill in Florida, enjoys looking for antique jewelry on the website and was excited to come across the pyx.

“When I saw that, I am a Christian so you know I believe in communion. It’s antique silver. ‘Oh, I have got to get that,’” she said.

McQuay was shocked and excited to know it brought people together in prayer.

“Right now, I just really can’t wait to get it to have my hands on it. It’s amazing,” she said.

And no matter where the pyx winds up in the future, Jesus’ presence will have always been within it.

“The Eucharist inside was priceless. That was the most important part,” Glover said.

Read about another unique treasure that was discovered:

Bishops need to ensure validity of matter for Eucharist

Common questions Catholics have about Lent