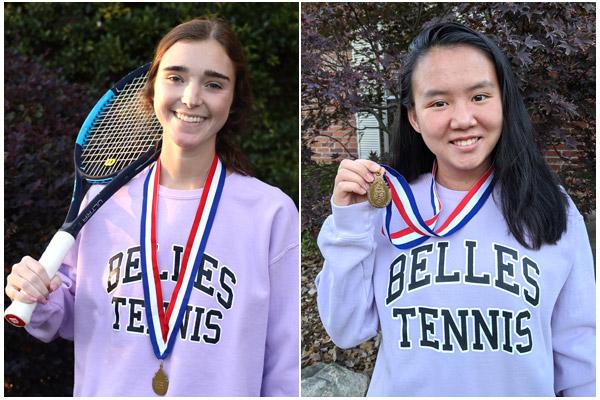 Read more about tennis athletes that have triumphed:

In the long line of successful tennis players to come through Mount St. Mary Academy’s program, the Libby Franks-Tasha Moreland partnership lasted a mere blink of the eye. But the doubles team will go down as one of the most resilient in recent memory.

Limited practice time. Late-season partner change. A bout with coronavirus. You name it, the duo faced it down -- along with the talented competition of a deep 6A class.

The duo took radically different routes to the Belles. Franks picked up the sport after the Easter Bunny left her a tennis racket in the first grade. She played steadily until middle school, took a break, then picked it up again at Mount.

“In practices ... there were definitely a couple instances where we struggled a little bit. Once we got used to it, though, we were pretty unstoppable.” Libby Franks

Moreland, a junior, has been playing for just five years, unheard of for someone with designs on playing at the state’s highest level.

“I started a little late,” she said in a massive understatement. “My mom plays and my grandparents play. I just kept going with it.”

“Most people have no problem playing doubles or singles. Some people just prefer one over the other,” she said. “For me, I prefer doubles because I just think it’s more fun to have someone else with you on the court. It’s definitely a lot less pressure for doubles because it’s not just you.”

For three years, Franks played with the same partner, Hagan Smith, and when senior year dawned, the duo was poised to make a run at conference and state titles. However, both contracted COVID-19, which sidelined them for three matches. When they returned, they found they had been replaced as the No. 1 doubles team.

“We missed so much practice that our coach put other people in our spot. At that point, Hagan and I were planning on being No. 1 doubles partners,” Franks said. “When we got back, everything had changed. It was like a whole readjusting process after that. That readjusting turned into me and Tasha being partners.”

“I actually thought we clicked pretty well from the start,” Moreland said. “I’d been able to watch her game, and we each had our strengths and weaknesses. I think when one of us wasn’t doing well the other person could tell. So, we could pick each other up and we communicated very well on the court.”

This quick melding of styles was a good thing considering the duo only got two matches in before the conference tournament. Winning both of those contests accelerated their confidence.

“Tasha’s really easy to work with,” said Franks. “She’s kind of like me; we’re both really level-headed, I would say. That’s not to say we don’t get in our heads and get frustrated, but we’re both strong mentally. Tasha’s also left-handed, which is a new dynamic, but it’s one that worked because she would get the ball down the middle. She has a really good serve. Everything just kind of played to our advantage.

“That’s not to say it was a match made in heaven. In practices, we would have practice match play and there were definitely a couple instances where we struggled a little bit. Once we got used to it, though, we were pretty unstoppable.”

The doubles team steamrolled to the finals of the conference tournament where they squared off against their teammates, Mount’s No. 1 doubles team of juniors Anna Grace and Libby Raffaelli. By then, there was no stopping Franks and Moreland.

“Tasha and I had played Libby and Anna in practice about a week before that match. We had won, and it wasn’t that close,” Franks said. “But Libby and Anna are really good, so we weren’t expecting it to be easy.”

“Libby and Anna are really nice. I definitely wanted to win, especially being a senior. In my head I was like, ‘They still have one more year left, this is it for me. I’ve got to give it my all.’ And somehow, we pulled it off.”

“It was a very interesting tournament,” Moreland said. “I personally think that we didn’t get dealt the easiest matches going into conference, but we had a positive attitude. Even when we were down, we kept on going and didn’t give up.”

The teams would tangle one more time, at the 6A state tournament. Both squads lost in the third round of the tourney pitting them against each other for third place honors. Franks and Moreland again prevailed, 7-5 6-1, to claim the bronze medal.

“Libby was very positive. When I was kind of getting mad or something, she’d always try to look on the good side and be like ‘We can get this. We can’t give up yet,’” Moreland said. “I’m really proud of how we did. We were really close to being in second place and going to overall, and for the teams that we had to face, I thought we did really well.”

The whirlwind partnership over, Franks turned her focus to basketball and looking forward to college. Moreland said she plans to play doubles again next year. Both say they are more than satisfied with how their short, successful pairing turned out in the end.

“I knew there was going to be lots of good competition. I went in with the mindset I was just going to try my best and see what happens. I was definitely satisfied with how we played. Third place in state is more than I ever would have imagined.”

Read more about tennis athletes that have triumphed: