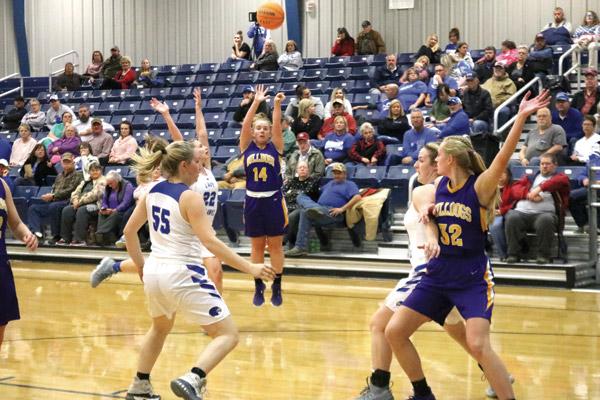 Courtesy St. Joseph School
Savannah Mooney (No. 14) launches a three-pointer while Lilly Hill (No. 32) blocks out for a rebound. The two Lady Bulldogs are each closing in on 1,000 career points in this, their final year of St. Joseph High School.

Courtesy St. Joseph School
Savannah Mooney (No. 14) launches a three-pointer while Lilly Hill (No. 32) blocks out for a rebound. The two Lady Bulldogs are each closing in on 1,000 career points in this, their final year of St. Joseph High School.

CONWAY — The magic of small schools is the bonds they create between classmates. Peers literally get the opportunity to watch and share in one another’s growing up, facing and overcoming challenges and celebrating wins and mourning disappointments along the way.

Small-school athletics only magnify these relationships, creating bonds that last a lifetime. Take Savannah Mooney and Lilly Hill, for instance, who play basketball for the St. Joseph Lady Bulldogs in Conway. The two seniors enter their final season together after having spent most of their lives on the hardwood together. It’s a strange and surreal feeling in this, the most unusual of final campaigns.

“We are the only seniors. It’s a small team. We have seven this year; one junior and four sophomores. So, it’s definitely a younger team,” Hill said. “It’s definitely been hard this year because the stands aren’t as packed as they were last year. But we’re getting through. We still have a lot of fans that come and support us, so that’s nice.”

“The most bittersweet thing is probably the fact that this will be the last time that I ever get to play with Lilly,” Mooney said. “I was always close with Lilly; we were already friends before basketball. We had a thing that we thought that we were sisters for a minute because we both had blonde hair. We had always been close since kindergarten.”

The two athletes’ complementary skill sets are immediately apparent: the taller Hill, a force on the post; Mooney, a quick and deadly outside shooter. They also share a competitive drive that was apparent from the start. It’s been an element of their respective games and personalities that has always been front and center.

“We first started playing together in fifth-grade Pee Wees at St. Joe,” Mooney said. “I really enjoyed playing with her because we meshed well because we were the most competitive ones on the team. We both had a common goal so we bonded over that. A lot of other people quit as the years went on, so we had to stick together.”

“In middle school, we didn’t have a close relationship because in P.E. we were always the most competitive in our class,” Hill said. “We would go up against each other. As we’ve gotten older, it’s all been getting along. We read each other’s minds on the court and it’s just been great. Basketball definitely grew that bond and made us close.”

Adding to the relationship are the other familial aspects of this year’s Lady Bulldogs. The duo is coached by Hill’s mother, Kay Lynn Hill, and Mooney’s little sister Maggie is the lone junior on the squad. The young team got off to a wobbly start this season, which have pushed the two seniors’ leadership skills to the forefront.

“Savannah is more of the vocal leader and I’m more of the body-language type, set-the-example type of leader,” Hill said.

“That is very accurate,” Mooney said. “I just think some people need to be talked to. Yes. And I want to win, so if you’re messing up or doing something that’s not going to help the team as a whole, Lilly is too nice to put people in their place, so I handle that.”

This season promises to be unlike any other due to COVID-19 restrictions, but the two athletes are just thankful they are getting the chance to close out their final season on the court. Especially as they each approach a milestone few get to claim, scoring 1,000 points each in their three-year high school careers. Both have less than 300 points to go to reach that impressive mark.

They also have a goal of making the state tournament, something that has eluded them in their previous two seasons. After that, their days as teammates are over, as Hill heads to the school soccer team and Mooney the softball team. But the bond will always remain.

“I really love (St. Joseph) because I know that I’m going to be friends with most of these people for the rest of my life,” Mooney said. “I’m not one of the families that have been going there for generations, but I feel like I and my sister have started that tradition for my family name. Maybe my kids will get to go there and the tradition will continue."