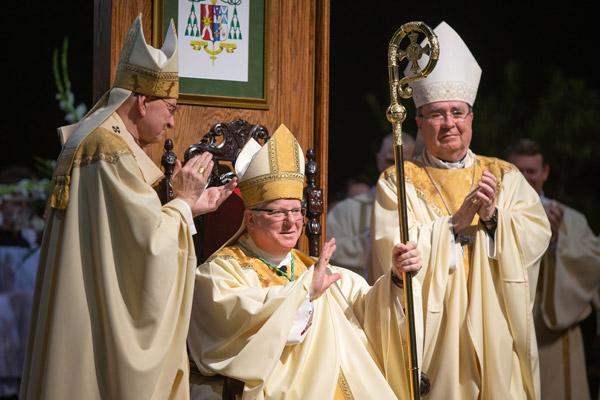 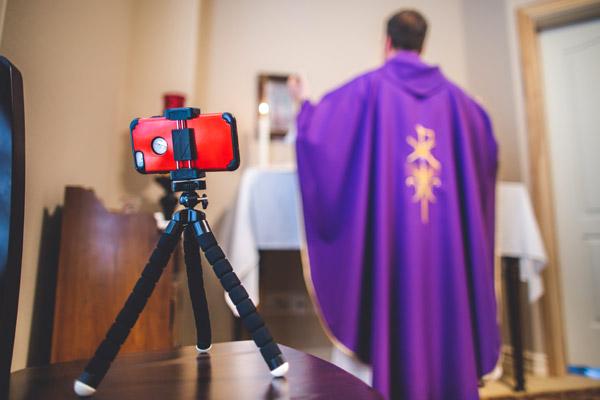 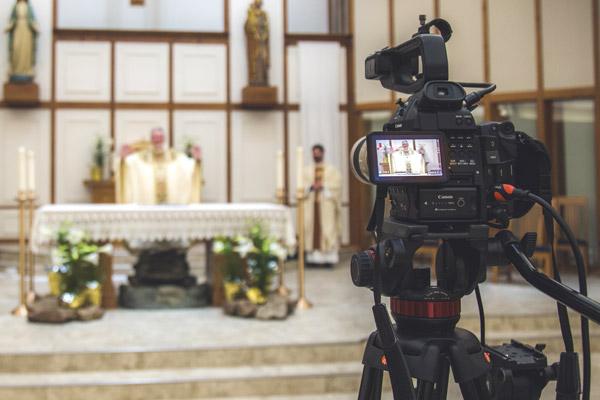 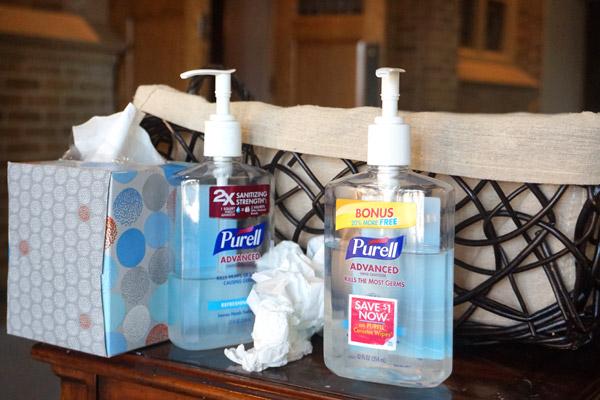 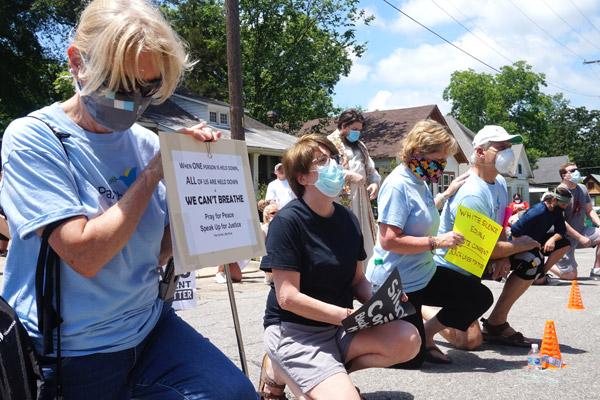 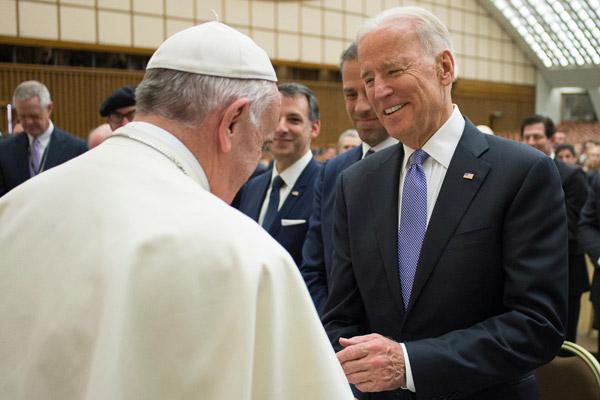 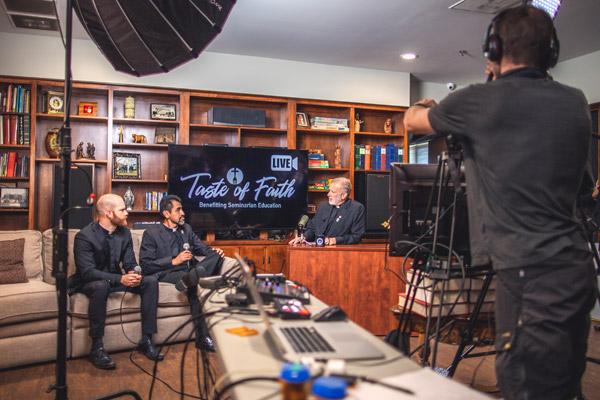 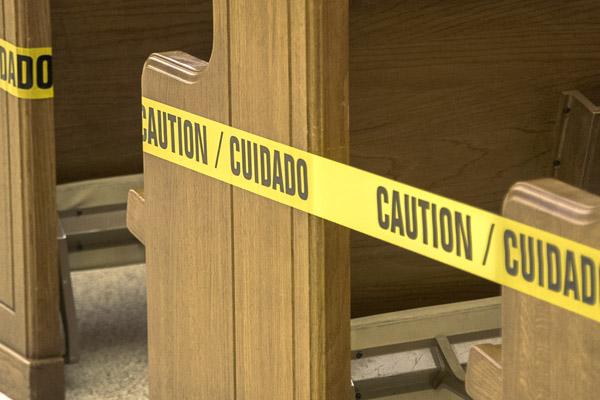 Travis McAfee, Arkansas Catholic file
Caution tape is used at St. Raphael Church in Springdale to mark off pews where parishioners can’t sit to promote 6-foot distancing between families. Beginning May 16 all parishes in the Diocese of Little Rock resumed Masses on a limited basis with strict precautions.

Travis McAfee, Arkansas Catholic file
Caution tape is used at St. Raphael Church in Springdale to mark off pews where parishioners can’t sit to promote 6-foot distancing between families. Beginning May 16 all parishes in the Diocese of Little Rock resumed Masses on a limited basis with strict precautions.

The annual Taste of Faith dinners, normally held across the state, are a vital fundraiser to support seminarian education. Money raised goes toward immediate expenses of housing and education. It is estimated to cost the diocese at least $1 million a year for the formation of 30 seminarians. Canceling Taste of Faith was not an option.

Instead, the Vocations Office pivoted to stream a live  one-hour program Aug. 8, with a goal to raise $500,000, the amount raised the past two years.

But what actually could be raised without an in-person event was uncertain. As it turned out, the fundraiser broke records: a total of $612,048 was given.

“This is by far the best we have done with Taste of Faith. I am overwhelmed by the support and generosity of our people in the diocese for our priests and seminarians," Msgr. Friend said.

“Do not fear: I am with you; do not be anxious: I am your God. I will strengthen you, I will help you, I will uphold you with my victorious right hand.” Isaiah 41:10

2020 felt a little too much like the Old Testament, or perhaps the Book of Revelation. With a deadly pandemic raging across the globe to political unrest to wildfires to racial injustice, there seemed to be too little hope to go around as we wandered through the desert. The world kept spinning, but almost everything stopped. While it may have felt like it at times, hope was never canceled. God has been walking with us with each step. He’s been the face of hospital workers caring for gravely ill virus patients. He’s been the employee packing up someone’s groceries. He’s been a mask-wearing volunteer, helping collect PPE supplies for people in need. He’s been a prayerful protester, advocating for justice. And he’s been at the bedside of the 1.5 million people worldwide who have died from COVID-19.

This is a year the world will never forget. But it’s a year of hope in the midst of darkness, with God showing us the light.

Society began shutting down as the deadliness of the unseen contagion was becoming all too clear. From canceled sporting events to cities on lockdown, the biggest shock locally was the temporary suspension of Masses in Arkansas in March, and subsequently around the world. This would include Easter and Holy Week. Bishop Anthony B. Taylor said in a March 12 letter: “Through the hard work of our dedicated health professionals, and with our cooperation and our faith in Jesus Christ, we will make it through the trying times that are sure to come over the weeks and months to come.”

Soon, schools would pivot to virtual learning and large events would be canceled. Phrases like “social distancing,” “wash your hands” and “wear a mask” would become daily chants. What we assumed would last only a few weeks has become a way of life for the foreseeable future in what Father Jason Tyler, pastor of St. Joseph Church in Fayetteville, dubbed “Covidic Time.”

When Bishop Taylor reinstated Masses in a May 4 letter, with strict distancing and mask-wearing guidelines, it was a joy for Catholics to again receive the Eucharist. The priestly ordinations of Fathers Joseph Friend and Daniel Velasco were pushed from May to August.

According to the Arkansas Department of Health as of Dec. 9, 2,786 Arkansans have died from COVID-19.

On May 25, 46-year-old George Floyd pleaded with a police officer kneeling on his neck that he couldn’t breathe. His death in Minneapolis renewed conversations about police brutality among Black people. The eight-minute, 46-second video of Floyd’s murder at the hands of officers sparked outrage, along with the shooting death of Black medical worker Breonna Taylor in her Louisville, Ky., home, with protests throughout the country including Arkansas.

Bishop Anthony B. Taylor responded in a statement June 2 to the death of Floyd, stating in part, “If the George Floyd murder had been just an isolated incident, we might be able to chalk it up to a single bad actor -- accompanied by several bad actor “see-no-evil” companions, made worse by the fact that as police officers they were sworn to uphold the law, not turn a blind eye to murder. But coming in the wake of several other such occurrences, it is clear that acts of racial hatred are not just something in the past.”

Pax Christi Little Rock joined the conversation by co-sponsoring the “Take a Knee - a Rally for Justice” in Little Rock. The Diocesan Council for Black Catholics led a series of listening sessions, allowing Black members and chaplain Father Warren Harvey to share their stories of racial inequality and how the Church can help be the change. In a listening session with seminarians at the House of Formation in Little Rock July 2, Father Harvey said, “We wanted to come to you as Church, and starting with you seminarians, our future Church leaders, our future priests, pastors, associate pastors. Our future mentors, spiritual directors, we come to you to say ‘please hear us in formation. Don’t get ordained with these blinders on.’”

To end yet another volatile election season, news organizations projected Democrat nominee Joe Biden as the winner Nov. 7 and on Dec. 14, the electoral college formalized the vote, meaning he will be the 46th president of the United States. According to a Catholic News Service article, news agency AP VoteCast reported the Catholic vote was split between the candidates, with 50 percent backing President Donald Trump and 49 percent backing President-elect Biden. Latinos, the second largest ethnic group in the Church, voted overwhelmingly for Biden. Almost 160 million American voted, a record-breaking moment for the U.S.

Biden is the second Catholic to be elected president, after John F. Kennedy in 1960. In a Nov. 7 speech after election results became clear, Biden told hundreds of supporters in Wilmington, Del., that he sought “not to divide but unify” the country. A member of St. Joseph on the Brandywine Church in the Diocese of Wilmington, he quoted lines from the hymn “On Eagle’s Wings,” written by Father Michael Joncas, to bring “comfort and solace” to those who had lost a loved one to COVID-19.

“It captures the faith that sustains me and which I believe sustains America,” Biden said in part.

Father Joncas tweeted after the speech, “To quote the president-elect, ‘I was honored and humbled’ to hear him quote ‘On Eagle’s Wings’ as he set out his initial vision for the country. I pray that the song can serve in some way to help the healing of our nation.”

In front of an estimated 2,650 Arkansas and Louisiana laity, bishops, priests and religious, Bishop Francis I. Malone was ordained the third bishop of the Diocese of Shreveport Jan. 28.

For 42 years, Bishop Malone had dedicated his life to the people of the Diocese of Little Rock, as a pastor, champion of Catholic education, a spiritual father to vocation discerners and generous mentor to mission work. In November 2019, it was announced he was chosen to be a bishop, to leave behind his beloved Christ the King Church and School in Little Rock where he pastored almost 19 years. His love for Arkansas was noted throughout the ordination, including the crosier used by the late Bishop Andrew J. McDonald, which was lent to him by the Diocese of Little Rock to use as he serves in Shreveport.

Bishop Malone said to his Little Rock family at the conclusion of his ordination, “My heart will ever remain with you,” while reassuring his dedicated service to the people of Louisiana: “This is very important, I want you to listen. I want you to know that for the years the Lord gives me to be your shepherd, I will live among you and I will die for you. This gives me great joy; I pray it does you as well.”

Just as swiftly as the COVID-19 pandemic shut down public Masses, parishes embraced technology. More quickly than any other time in history, parishes adapted, to begin livestreaming Masses to the faithful. While using technology as a tool for evangelization has been discussed for several years, the immediate need to do it was never there before.

Possibly one of the few bright lights to come out of the pandemic is parishes’ new ability to stream Masses, religious education and youth ministry, to host virtual fundraisers and consider new ways of reaching people online. The annual Taste of Faith dinner in Little Rock, a fundraiser for seminarian education, raised a record total (See sidebar). In addition to Masses and other parish and school events, parishes were able to livestream funerals and weddings for people who could not travel.

“It’s really touching,” he said in March of people tuning in. “Most people are sort of hunkered down with their families. For a priest, our family is really our parish, the people we’re called to minister to. As a priest, I’m hunkered down away from my family, so what I’m doing online is to keep that connection.”

The annual Taste of Faith dinners, normally held across the state, are a vital fundraiser to support seminarian education. Money raised goes toward immediate expenses of housing and education. It is estimated to cost the diocese at least $1 million a year for the formation of 30 seminarians. Canceling Taste of Faith was not an option.

Instead, the Vocations Office pivoted to stream a live  one-hour program Aug. 8, with a goal to raise $500,000, the amount raised the past two years.

But what actually could be raised without an in-person event was uncertain. As it turned out, the fundraiser broke records: a total of $612,048 was given.

“This is by far the best we have done with Taste of Faith. I am overwhelmed by the support and generosity of our people in the diocese for our priests and seminarians," Msgr. Friend said.