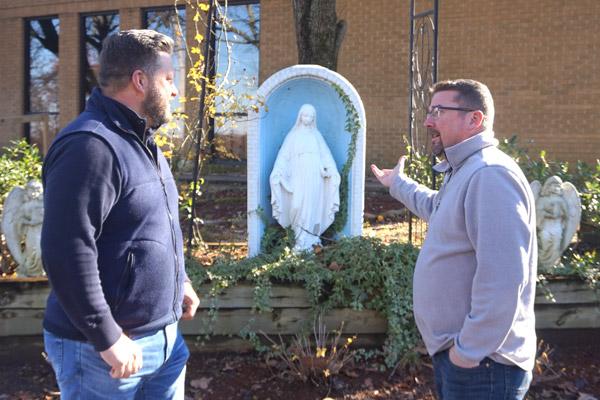 Aprille Hanson
Shawn Stane (right) points at the statue of Mary at Immaculate Conception Church in North Little Rock while talking with Phillip Renfro, president and founder of Ark of Heaven Media Group. Renfro, Stane and two other board members are working to bring a Catholic radio station to Central Arkansas.

Aprille Hanson
Shawn Stane (right) points at the statue of Mary at Immaculate Conception Church in North Little Rock while talking with Phillip Renfro, president and founder of Ark of Heaven Media Group. Renfro, Stane and two other board members are working to bring a Catholic radio station to Central Arkansas.

Seven years ago, Phillip Renfro was downloading Catholic audio programs and burning them to CDs so he could listen to spiritually fulfilling media on his commutes to work.

“I was at a point in my life that my career was supporting our family, but it didn’t feel like it was kind of my purpose,” the married father of three said. “On the drive home I just kind of asked God, ‘What do you want me to do?’ To my shock, I got this response, ‘I want you to start Catholc radio in Little Rock.’ I didn’t know if at first I believed it.”

Today, that message from God is beginning its journey toward becoming reality. The Ark of Heaven Media Group, a nonprofit corporation working toward 501(c)(3) status, has been established to buy an FM radio station to be called “New Covenant Radio” to bring Catholic radio to Central Arkansas. With president and founder Renfro at its helm -- a side project to his day job as an electrical engineer for Entergy -- he is assisted by vice president Scott Nauman, treasurer Shawn Stane, both parishioners at Immaculate Conception Church in North Little Rock, and secretary DeAnn Lehigh, parishioner at St. Edward Church in Little Rock, to raise funds to buy an FM station.

He said in the video, “I wish to congratulate those who have worked hard to form Ark of Heaven Media Group. I give you my blessing, and I offer you my prayers for the success of your worthy mission. For our community and all listeners and viewers of this new content, my prayer is that you will be nourished in mind and heart by the offerings of Ark of Heaven Media Group. That the beauty, goodness and truth of the Gospel of Jesus Christ will resonate with those who do not know it and that Catholic Christians will be equipped for the living of their faith.”

The group is also looking at other venues before the station is purchased, including podcasting.

The grassroots effort has raised $992.

“We’re looking at $2 million before it’s all said and done. I think the going rate is about $1.5 million, that’s just to purchase the station. If we have to hire people to keep it running, especially equipment upgrades,” then extra money will be needed, Renfro said.

There are currently no FM frequencies available for sale.

While it’s a lofty goal, it’s not insurmountable, particularly with Mary, depicted in the Book of Revelation as the Ark of Heaven, as the patroness of their media apostolate.

“She brings the Word of God to us, the Word in flesh is Christ himself, so she is going to be the one to spread the word of his good news to the local Catholic culture and to those who are not Catholic who come across our station and like what they hear,” Renfro said.

A convert and parishioner at Immaculate Conception Church in North Little Rock, Renfro is most excited about the prospect of non-Catholics listening to Catholic programs to fight some of the misconceptions and lies shared about the faith.

The hope is for the station to cover Central Arkansas and host syndicated content from Catholic radio networks like EWTN and Relevant Radio but also local coverage of parish events and other feature stories.

“There’s a lot of potential with that. Everything from interviews with priests and religious, to make them more accessible, to who knows, maybe covering Catholic High School football games. Even doing a once a week segment with the Arkansas Catholic newspaper,” Renfro said.

Father Patrick Friend is serving as the media group’s chaplain. He has provided daily Gospel reflections for its Facebook page.

“I’m very excited. I think that the potential of having this means of evangelization, of having the Gospel in that space is so vital,” Father Friend said. “In the time of advancing technology, the radio still seems to matter. We spend so much time in our car and listening to things, it could just be such a great opportunity for Central Arkansas to have the Catholic perspective as a voice in the middle of all the turmoil and the other things out there.”

One-time or recurring donations are accepted through a Paypal link on its website, arkofheavenmedia.org. Checks also can be mailed to 2513 McCain Blvd., Suite 2-226, North Little Rock, AR 72116-7606.