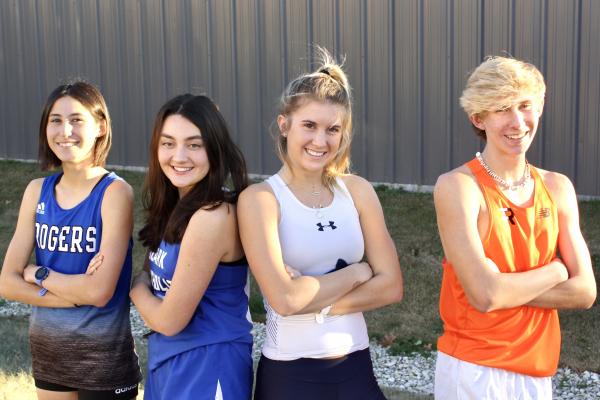 BENTONVILLE -- The sport of running has seen a rebirth during the pandemic, but for competitive runners it has not been without its challenges.

Like most high school athletes, runners saw their sports season come to a halt last spring as the coronavirus introduced itself and then lurch back into session in the fall with starts and stops of cancellations in between. Despite the months-long pandemic, these northwest Arkansas high school runners have taken it all in stride and kept on running: Mia Loafman, Rogers; Jacob Tyburski, Bentonville; Mary Helen Schaefer, Rogers; Abigail Livingston, Springdale; and Dawson Welch, Springdale.

The five runners attend multiple high schools, running cross country and track, but they have all stayed the course. They all made it to the state meet held in Hot Springs in November. They know one another from competing at cross country meets and running with a local club, Triple Threat Racing.

The one point they all agree on is that running has helped them manage the uncertainty of the times.

Mia Loafman, a sophomore at Rogers High School and parishioner of St. Vincent de Paul Church in Rogers, said running has helped her cope during the pandemic because she was inside a lot.

“It feels good to get outside and feel the fresh air,” Loafman said. “Running helps me relieve stress.”

Jacob Tyburski, a senior at Haas Hall Academy in Bentonville, ran at Subiaco Academy his freshman year. After transferring back to northwest Arkansas, he started getting serious about his running as a sophomore at Haas Hall.

“Running has definitely given me something to focus on outside of school during this pandemic. It has helped me stay motivated and on schedule. If it wasn’t for running, I would be doing a lot of lying around and watching TV,” he said.

Fellow senior, Mary Helen Schaefer, a student at Ozark Catholic Academy in Tontitown and a parishioner of St. Vincent de Paul Church in Rogers, believes running has also helped her stay on track.

"Running has been my outlet during the pandemic,” she said. “When so many things in our lives were cancelled or postponed, running became my constant when everything seemed chaotic.”

Abigail Livingston, a junior at Har-ber High School in Springdale and a member of St. Raphael Church, agreed. “Running has given me the ability to get out of the house and just find peace in the middle of all this craziness,” she said.

Dawson Welch, a fellow junior at Har-Ber High School and a member of St. Joseph Church in Tontitown, said running has given him a support system.

"The support of friends and people that have continued to motivate me has made a big difference," Welch said of the past few months.

All five ran in the Arkansas State Cross Country Championships in their respective conferences, four of them competing to become All-State runners.

As seniors, it was particularly meaningful for Tyburski and Schaefer, who ran in the 2A and 1A conferences respectively, to finish their last high school cross country season successfully. Tyburski finished in first place in the boys 2A conference running a 17:00 5K. The championship meet afforded Schaefer the chance to be the first All-State athlete at Ozark Catholic Academy, placing seventh out of 63 runners.

Loafman earned All-State, placing second in the 6A conference with a time of 18:39 in the 5K. Livingston, who runs a 5:30 mile in track, ran injured at the state cross country meet, but felt it gave her a chance to prove that she could be there for the team.

Welch placed sixth in the nation at the USA Track and Field Junior Nationals, with a time of 4:05 in the 1500 event. He also competed in the 6A State Cross Country Championships with a time of 17:06 in the 5K and an All-State title. His goal is to make it to outdoor nationals next year and compete in the 1500 and 3000 events.

Livingston said running has inspired her and driven her faith life.

“My running ability is something I’m very blessed to have,” she said. “God has given me this natural talent, but that doesn’t mean I don’t have to work for it. I’ve learned what dedication is and how to pursue things full-heartedly.”

Schaefer said running has taught her how to persevere through moments of spiritual drought. “Sometimes you feel like you have moments of doubt and can’t keep going in running or in your prayer life,” she said, “but running has helped me soldier on when I don’t feel like it. It helps me pray when I run and gives me clarity to resolve issues during the difficult times.”