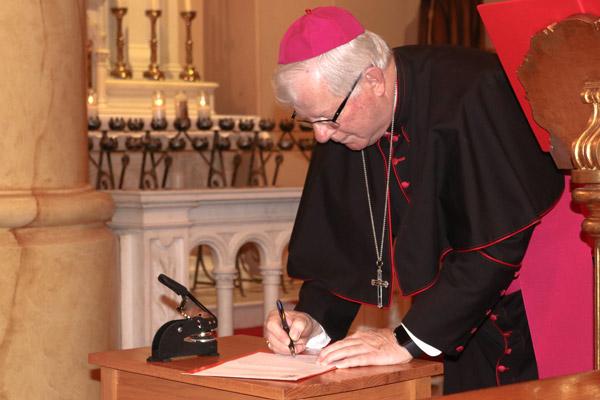 CNS / Kierstin Richter, courtesy Diocese of Shreveport
Bishop Francis I. Malone of Shreveport, La., signs a decree of recognition Dec. 8 at Holy Trinity Catholic Church in downtown Shreveport, officially opening a sainthood cause for five priests who died ministering to people during the yellow fever epidemic of 1873.

CNS / Kierstin Richter, courtesy Diocese of Shreveport
Bishop Francis I. Malone of Shreveport, La., signs a decree of recognition Dec. 8 at Holy Trinity Catholic Church in downtown Shreveport, officially opening a sainthood cause for five priests who died ministering to people during the yellow fever epidemic of 1873.

SHREVEPORT, La. (CNS) -- The sacrifice of five Catholic priests who gave their lives ministering to people in Shreveport during the 1873 yellow fever epidemic is memorialized in stained glass at Holy Trinity Church in downtown.

Their stories have been regularly recounted across nearly 150 years of news reports and histories of Shreveport. The city's Pierre Avenue is named in honor of one of them, Father Jean Pierre, the first pastor of Holy Trinity.

And now their story will be widely known in the Catholic Church in the U.S. and beyond with the formal opening of their sainthood cause.

"It is my joy, on this feast of the Immaculate Conception and from this historic church, to announce that we may refer to them as 'Servants of God,'" Shreveport Bishop Francis I. Malone said at a Dec. 8 news conference at Holy Trinity Church.

"I am still within my first year here as the bishop of the 16 northernmost (civil) parishes of Louisiana, but I learned quickly of the extraordinary zeal of these earliest of missionary priests to our area, which culminated in the free offer of their lives in the yellow fever epidemic of 1873," said the prelate, who was ordained and installed as Shreveport's bishop Jan. 28.

"The stories of their lives, up to their deaths in the epidemic, are truly extraordinary," he said. The diocese has a website that tells their stories: https://shreveportmartyrs.org.

In the late summer of 1873, Shreveport was besieged by the third-worst epidemic of yellow fever recorded in U.S. history, losing one-fourth of its population. One Catholic priest who refused to leave the sick and the dying and four others who knowingly entered the quarantined areas were among the city's dead.

"Each priest made the free and voluntary offer of life and heroic acceptance of a premature and horrific yellow fever death, in the act of charity," the diocese said in a news release.

Father Pierre was the first Catholic pastor in Shreveport. He came from Saint-Brieuc, a town in the Brittany region of France, as a missionary priest to what was then the Diocese of Natchitoches, La., established in 1853.

He first went to the tiny community of Bayou Pierre, Louisiana, which today is called Carmel. In 1856, he was assigned to Shreveport and was tasked with founding a new church -- Holy Trinity. He also ministered in the civil parishes of Caddo, Bossier, DeSoto, Webster and Claiborne, Louisiana.

The other four priests are:

The Vatican's Congregation for Saints' Causes has reviewed their stories and granted the Diocese of Shreveport permission to begin the process of gathering evidence of the sanctity of the priests' lives and the devotion to them.

It is the first step on the road to sainthood. The next step is a declaration by the Vatican they lived lives of extraordinary and heroic virtue and they will be granted the title "Venerable."

The next two steps are beatification and canonization: In general, each step needs verification of a miraculous cure or event attributed to the intercession of the sainthood candidate.

"The culmination of this process may very well, in fact, most likely will take place in a number of decades," said Bishop Malone, who before being appointed to Shreveport by Pope Francis Nov. 19, 2019, was a pastor and chancellor for ecclesial affairs in the Diocese of Little Rock..

"Today is the needed first step toward that goal," he added.

According to the diocese there has never before been any sainthood cause from northern Louisiana, "making this an especially historic development for the region."

The fact that the five priests' cause "is proceeding during a time of pandemic is a noteworthy historic parallel," it said.

The groundwork needed to be able to officially open the priests' sainthood cause has led to extensive research into their lives for a book-length manuscript, podcast and graphic novel project currently underway by Father Peter Mangum, rector of the Cathedral of St. John Berchmans in Shreveport, local historian W. Ryan Smith and Cheryl White, a history professor at Louisiana State University Shreveport.

The trio's project sets the biographies of the priests in the broader narrative of the 1873 Shreveport epidemic. Their soon-to-be-published book is titled "The Surest Path to Heaven: 1873 Shreveport Martyrs."

Is it a miracle? Diocese gathers facts in alleged healing