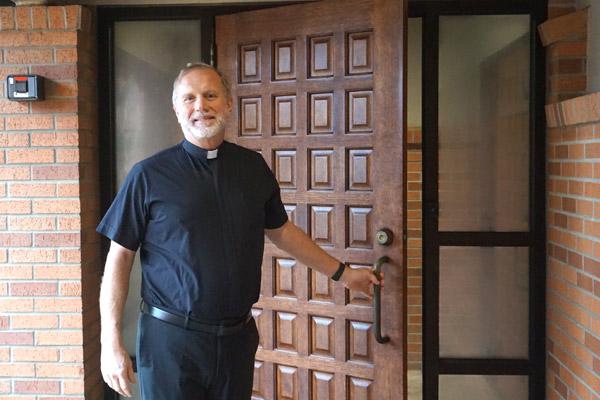 Aprille Hanson
Msgr. Scott Friend stands outside the House of Formation in Little Rock Dec. 30 while under quarantine for COVID-19. His results were negative and no seminarians in the house have been positive for the virus.

Aprille Hanson
Msgr. Scott Friend stands outside the House of Formation in Little Rock Dec. 30 while under quarantine for COVID-19. His results were negative and no seminarians in the house have been positive for the virus.

With a spike in coronavirus cases in Arkansas after Thanksgiving, outbreaks also occurred to two religious houses in the state.

St. Scholastica Monastery in Fort Smith reported its first cases Dec. 12, followed by Subiaco Abbey Dec. 26. Even with Bishop Anthony B. Taylor testing positive Dec. 10, no seminarians at the House of Formation in Little Rock where the bishop lives have thus far tested positive for COVID-19.

No cases have been reported at Holy Angels Convent in Jonesboro, as of Dec. 29, according to prioress Mother Laura Cathcart, OSB. Prioress Sister Lucia Ellender, OCD, also reported no cases as of Dec. 30 at the Carmelite Convent in Little Rock.

“We went from March up until halfway through December ... but then we got a couple of cases and people came in contact with them and it spread pretty quick.” Abbot Leonard Wangler of Subiaco Abbey

The hardest hit community has been St. Scholastica Monastery, with 13 out of 22 sisters living in the monastery testing positive. All sisters were in quarantine or isolation through Dec. 30.

The monastery suffered an initial bout with COVID-19 in October when several of the six elderly sisters residing in Chapel Ridge Nursing Home contracted the virus. Sister Alice O'Brien died from COVID-related illness Oct. 17. The five surviving sisters there received their first dose of vaccine Dec. 30.

Over a two-month period, five staff members, including one contract worker, tested positive for the virus. The sisters have gone into precautionary quarantines twice.

On Dec. 12, one sister tested positive and within a week, despite strict quarantine, 12 more sisters were infected. One sister is currently hospitalized, and a second sister returned home Dec. 31. Eleven of the 13 sisters received a monoclonal antibody infusion, a treatment that Bishop Taylor also received Dec. 11, to lessen the symptoms.

The sisters ended their quarantine Dec. 31. Chaplain Father Les Farley resumed daily Masses, and the community all gathered again for Liturgy of the Hours Jan. 1.

"We are grateful that we have been so blessed in light of this COVID crisis," said prioress Sister Kimberly Prohaska, who also contracted the virus. "People have been so kind and so generous. There are no words to express our gratitude to everyone. We are doing really well. It was wonderful to go into chapel again and know our life together as Benedictine women is to pray and care for one another. We are looking forward to celebrating our Christmas Jan. 6."

Subiaco Abbey has 15 positive cases of COVID-19. Seven monks have been infected, including St. Benedict Church pastor Father Mark Stengel, who was the first known monk to contract it, as well as eight lay employees. Abbot Leonard Wangler said there are also eight monks in quarantine, with more COVID-19 tests being administered Dec. 30. There are about 37 monks who live at the abbey.

“We went from March up until halfway through December and we did not have anything at all,” Abbot Leonard said. “And then I don't know whether we let our guard down, maybe it was just because it was our time, but then we got a couple of cases and people came in contact with them and it spread pretty quick.”

Father Jerome Kodell, 80, who served as the abbot for 25 years until his retirement in 2015, was the only monk hospitalized with COVID-19.

“I was concerned about him right away even though he goes to work, he’s of the age I'd consider his health fragile. He’d probably take exception to my statement. He’s well into the age you’ve got to be careful with,” Abbot Leonard said, but added his lungs had cleared after about 10 days in the hospital. As of Jan. 4, Father Kodell was back at the abbey.

But Abbot Leonard pointed out that Father Kodell wanted people to know he was hospitalized, in hopes that others would take it more seriously if they knew someone with COVID-19.

“We want to stop this thing,” the abbot said.

Since the outbreak, meals are boxed up rather than self served and are delivered for those in quarantine. While a few people had been attending the monks’ morning Masses, those are now closed to the public. Public Masses following safety protocols are still being held for the parish, as the pastor is at least 20 feet away from the congregation, with eucharistic ministers distributing Communion. This was also discussed with the parish council, Abbot Leonard said.

Despite the seminarians being around the bishop, no one else living at the house on the grounds of Our Lady of Good Counsel Church tested positive, Msgr. Friend said Dec. 29. Father Friend, a nephew of Msgr. Friend, contracted COVID-19 in November, outside the House of Formation.

“We’ve been following all the protocols that the CDC (Centers for Disease Control and Prevention) as well as the state are asking us to do. So we’ll just continue to do that, obviously it worked for us,” Msgr. Friend said. “... The guys have been really good. They’ve stayed in the house; they haven’t gone out or done stuff like that. I’m really proud of them because I know it’s been hard on them.”

Seminarians returned home to their families in December after quarantining. Msgr. Friend was in quarantine after another nephew, Father Joseph Friend, tested positive for COVID-19 but Msgr. Friend tested negative Jan. 1. Out of 29 seminarians, the 15 who are studying in seminaries will return in January to their schools in Indiana and Texas.

Bishop Taylor’s isolation ended Dec. 23.
“I got two COVID tests at that point, both of which came out negative, so I am in good shape as far as COVID 19 is concerned,” the bishop said Dec. 29. “I still experience some fatigue and continue to need more sleep than usual, so out of an abundance of caution and out of a desire not to overdo it, I elected not to preside at the midnight Mass at the Cathedral and a couple of previously scheduled Masses in North Little Rock. Instead I drove to Oklahoma on Dec. 24 and celebrated a low-key Christmas Mass with my family there.”

Because of rising COVID cases, Msgr. Friend and Father Hebert canceled the Jan. 2-3 Come and See vocations discernment retreat. Msgr. Friend said they did not want to put the seminarians at risk for the virus or put them in a position of having to quarantine again.

Aprille Hanson and Maryanne Meyerriecks contributed to this report.