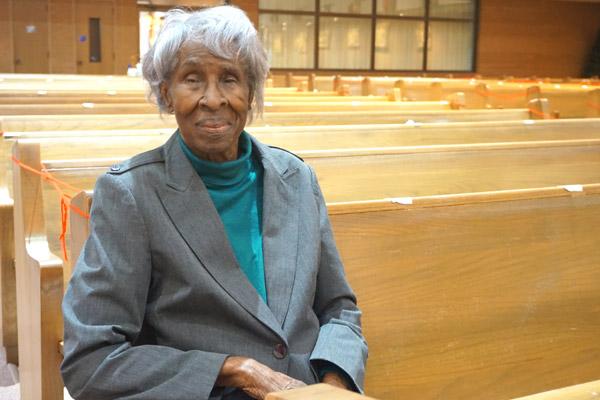 Aprille Hanson
Sophronia Williams, 91, smiles Dec. 30 at her church, Our Lady of Good Counsel in Little Rock. Williams broke barriers in nursing throughout her 46-year career, becoming the first or second Black nurse at multiple hospitals.

Aprille Hanson
Sophronia Williams, 91, smiles Dec. 30 at her church, Our Lady of Good Counsel in Little Rock. Williams broke barriers in nursing throughout her 46-year career, becoming the first or second Black nurse at multiple hospitals.

Sophronia Williams does not consider herself a trailblazer. But by all accounts, from being the first Black nurse in different hospitals to her conversion to the Catholic faith, her life is one of unique blessings.

“People often tell me I was lucky. No, I was blessed. I don’t like that word ‘lucky’ … I believe in a plan, and I believe it was there for me,” said the 91-year-old known as Sophie.

For 46 years, Williams worked as a nurse and nursing educator, specializing in mental health, retiring from the University of Arkansas for Medical Sciences Medical Center at 69 years old.

Almost completely blind, Williams lives at Woodland Heights retirement community and attends Our Lady of Good Counsel Church in Little Rock. While her eyesight has faded, her memories are as clear as her love for the Lord.

The second of six children, Williams was born June 19, 1929, in Little Rock. Her father was a Pentecostal minister, leading a Church of God in Christ congregation.

“If you were a preacher’s child, they’d watch you like a hawk,” she said, admitting she was and is not an “angel,” but that she was obedient.

While the church was filled with clapping, dancing and lively praise -- contrary to her reserved nature -- there was also a lot of talk about “fire and brimstone.”

“I don’t recall hearing about being forgiven. If you committed some sin, that was it for you on your way to hell … This is the way I perceived it,” she said.

But the Christian home her parents built impacted the way she carried herself, particularly as a young Black woman. Williams said they were shielded from racial injustice in a segregated Little Rock. She recalled once when a white woman hit her father’s car. While the woman assumed she would not be ticketed, the officer gave her a ticket, not Williams’ father.

“My parents used that to point out to us that people could be fair … We were in a protected environment; they didn’t place emphasis on disliking people that were different,” Williams said.

Williams graduated from the former Dunbar High School in Little Rock in 1949 (now a junior high school), attending Dunbar Junior College for a year. Because no nursing programs in Arkansas would accept a Black student, she attended Homer G. Phillips School of Nursing, an historically Black college in St. Louis. Upon her graduation in 1952, she worked at a local hospital before getting a shot at her true passion, working in a psychiatric unit, at Jefferson Barracks, a Veterans Affairs hospital in Missouri. They integrated the hospital in September, and she arrived in March as one of the first two Black nurses. She’d go on to be the first Black nurse at hospitals in Colorado and Ohio as well.

“There was something about giving back that interests me,” she said of her desire to be a nurse. … also, my cousin was a nurse. She was married to a doctor. I thought that’d be a neat way to go,” she laughed, though she never married.

Between working as a hospital aide at St. Vincent Infirmary as a teenager while attending high school and meeting fellow teens who attended St. Bartholomew School and Church, Williams was quietly drawn to the faith.

Williams went to Washington University in St. Louis in 1957 and later received her master’s degree. She spent her career working in Missouri, Ohio, Colorado and then back in Arkansas for 16 years.

“I really cared. I do a lot of giving of myself to people. I did show I cared about them, treating them as human beings,” she added.

She became Catholic in the late 1950s at St. Engelbert in St. Louis. Her father never knew.

“The one thing is I believed I could be forgiven. Most people dreaded going to confession, it was a very important thing for me to do,” she said.

Williams admits she was blessed to experience more support than discrimination. But a summer teaching position in 1961 tested her strength. She was a faculty member at Southern Illinois University in Carbondale but led clinical trials in mental health for her white students at the state hospital in Anna, Ill.

“Black people could work there, but they had to be out before dark,” Williams said. “... A man said they could not accept me because I was a negro ... I had nightmares that they were coming to get me to lynch me.”

However, the supportive students made the experience worth it.

“I just put my faith in God and these students,” telling them, “‘You were here to get an education.’ … and they got a top education from me.”

At UAMS, she was an associate professor, primarily teaching about mental health.

“We still have a ways to go. That stigma was very blatantly there,” for those who struggle with mental health. “Now it’s a little better; it’s changed in how they housed them, it used to be like that one movie,” 1975’s “One Flew Over the Cuckoo’s Nest.”

“I think there’s still people who don’t understand that the mind is like the rest of the body, and you can have a disease and it’s manifested in different ways,” she said, adding that there’s still a long road to go with racial justice too.

“Some people out there are still really racists, some Blacks and whites,” she said.

While the loss of her sight and this year has been tough, she has kept her faith.

“Whatever it is, I’m trying to let God lead me there. I get a little scared sometimes because I don’t know where I’m going. But I believe there’s a plan,” she said.