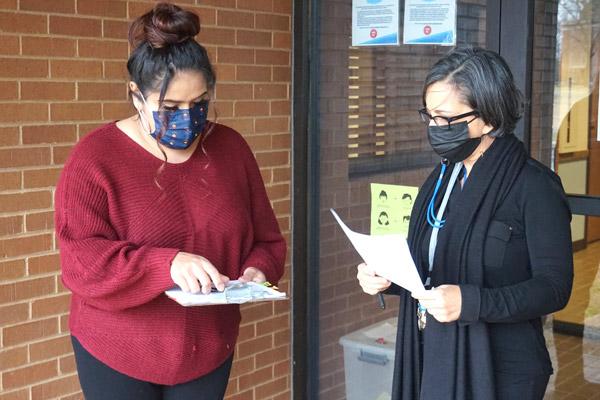 Young undocumented immigrants again have the chance to live and work in the United States without fear of deportation under the protection of the Deferred Action for Childhood Arrivals program after restrictions were lifted Dec. 4.

Federal judge Nicholas G. Garaufis, of the U.S. District Court in Brooklyn, ruled the government must allow eligible immigrants to apply for DACA, invalidating a memorandum from summer 2020 that allowed DACA renewals to be processed but barred any new applicants, according to a Dec. 4 report in The New York Times. The memo was issued by acting secretary of Homeland Security Chad Wolf. The article estimated 300,000 new applicants could be eligible. The judge also restored work permit renewals to two years after the summer memo restricted them to one year.

For Catholic Charities of Arkansas Immigration Services in Little Rock and Springdale, which handles both initial DACA applications and renewals, it was a relief.

“Finally,” said Jennifer Verkamp-Ruthven, director of Immigration Services. “It was a huge sigh of relief because we’ve had people calling even over the years” despite the program being halted for first-time applicants. “People barely missed it whenever it went away.”

“I was excited, but nervous too because we have a lot of people calling because they’ve been waiting for years. Hopefully we can stay on top of it,” she added.

The 2012 program, started under President Barack Obama, protects undocumented immigrants, known as Dreamers, who were under age 31 as of June 15, 2012, and who were brought to the United States before age 16. They are required to have a high school diploma or G.E.D. (except those who serve in the U.S. military) and keep a clean criminal record to be protected from deportation through the program, which also provides permits to work legally. They are also allowed to receive a driver’s license.

According to The New York Times, “researchers estimate that 250,000 U.S.-born children have at least one parent who is enrolled in DACA, and that about 1.5 million people in the United States live with a beneficiary of the program.”

DACA has been a target under the administration of President Donald Trump since he took office in 2016. Trump called the program unconstitutional and issued an executive order in September 2017 to end it, an effort halted by federal judges. The program has been in limbo until the Supreme Court ruled June 18 that Trump did not follow proper procedures to end DACA. The summer memorandum restricting DACA again came after the ruling.

The New York Times stated immigration advocates were hopeful the outgoing administration would not challenge the ruling before a new administration takes over.

“It’s kind of a whirlwind. I feel like the DACA saga has just kind of brought people up and down quite a bit over the years,” Verkamp-Ruthven said.

Diana Pacheco, 23, a parishioner at St. Theresa Church in Little Rock, applied for and was approved for DACA in 2016. She came to the U.S. from her native Mexico at 6 years old.

“The first one to come to the United States was my mom. It was a better life since in Mexico it’s really hard to get a job, to live over there,” Pacheco said.

After graduating high school, college and a living-wage job were out of reach, despite spending most of her life in the United States. Since DACA, she has worked in the hotel industry, but also recently applied for a position in customer service at an eye care clinic.

“If I wouldn’t have had DACA, I wouldn't have been able to work in something else or experience something else,” she said, adding she cried when DACA was reinstated in the summer and when the restrictions were lifted last month.

“I was really excited not just because of me, but because my nephew graduated last year, and if they wouldn’t bring DACA back, he wouldn’t be able to apply for DACA and apply for college,” Pacheco said.

Karla Campalans, an immigration specialist in training who has worked on several DACA renewals, said they’ve received calls daily to ask about the application process, which can take three to four months with the United States Citizenship and Immigration Services backed up because of COVID-19 pandemic closures.

For her, “giving them this opportunity and being this person that did the paperwork for them … I’m just super excited to be bringing them hope.”

Verkamp-Ruthven said this ruling could also help with the shortage of nurses during the pandemic. In 2019, the Arkansas Legislature passed Act 837, which allows DACA recipients who have graduated from a nursing program to be licensed to practice in the state.

President-elect Joe Biden, who takes office Jan. 20, has stated his support for the DACA program.

However, immigration advocates have been calling for years to create a permanent legislative solution for Dreamers to live and work in the U.S. with a possible path to citizenship.