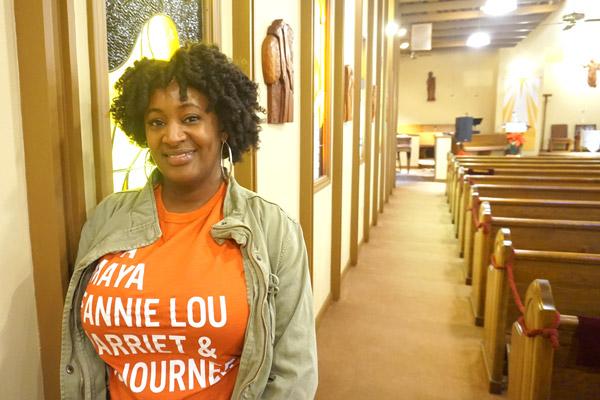 Aprille Hanson
Dionne Mitchell, 29, stands by Black depictions of the Stations of the Cross and in the stained glass windows Jan. 8 at her church, St. Augustine Church in North Little Rock.

Aprille Hanson
Dionne Mitchell, 29, stands by Black depictions of the Stations of the Cross and in the stained glass windows Jan. 8 at her church, St. Augustine Church in North Little Rock.

Dionne Mitchell was born and raised Catholic, attending St. Augustine Church in North Little Rock, one of three historically Black Catholic churches in Arkansas. As a 29-year-old, she has her pick of churches in Central Arkansas, but has always sought out a predominantly Black congregation.

“I wanted to be around people that look like me,” she said. “... I didn’t feel excluded (in other parishes). I just always thought it was weird seeing white Jesus in a church.”

Walking into most churches in Arkansas, there’s no shortage of Anglo depictions of Jesus, Mary and Joseph -- the cross, statutes and Stations of the Cross. But for a Church that’s supposed to be universal, the concept of being welcoming can start with more diverse depictions of the Holy Family. But it runs deeper than that for local Black Catholics, rooted in cultural acceptance.

“It was something I had to discern before entering the Church,” said Diocese of Little Rock seminarian Duwan Booker, who converted to Catholicism in 2018. “Race was an issue for me even before entering. It’s difficult not being around those without shared experiences.”

‘This is my Church’

According to Pew Research Center’s 2014 Religious Landscape Study, 5 percent of Black Americans are Catholic, while Catholics are 48 percent of Hispanics, 19 percent of whites and 17 percent of Asians.

“I have always considered myself a triple minority. I’m Black, I'm a woman and I’m Catholic,” Mitchell said. “That puts me in a very odd category. When I tell people I’m Catholic, especially Black folks, it’s ‘Oh really, I didn’t know there were Black Catholics’ … It’s always a lot of teaching and explaining what exactly Catholicism is.”

Despite the low numbers of Black Catholics today, the Church has powerful historical Black figures, including Venerable Father Augustus Tolton, a former slave turned priest, and Julia Greeley, OFS, who was known as “Denver’s Angel of Charity.” Both have open causes for sainthood.

Blake Johnson, who converted to Catholicism in 2017 at Holy Rosary Church in Stuttgart after being raised Pentecostal, found strength in these historical Black leaders.

“Especially Julia Greeley because she was an ex-slave, and she didn’t have much but still found it in her heart to be a servant to other people,” said Johnson, 23, a senior at the University of Central Arkansas in Conway. “That’s one reason I joined the Catholic Church, the Corporal Works of Mercy and serving others.”

Booker said reading the 1995 book “The History of Black Catholics in the United States” by Father Cyprian Davis was eye opening.

“The Church is just as much mine. I have a claim to the Church just as much as the Anglos or as the Hispanics. What that did for me in my vocation, it allowed me for the first time to really realize that God called me … He called me to be Duwan.”

“I definitely experienced some issues with ways I wanted to express myself in worship,” he said.

“Clapping my hands, listening to more traditional Gospel music, the style of the preaching. I guess just feeling limited a little bit in those areas.”

Booker said a few weeks before entering the Church at Easter Vigil, he attended a retreat from the Diocesan Council for Black Catholics.

“There was a time I was ashamed to say I was becoming Catholic because I carried the stigma of Catholicism being inherently white. That was tough,” Booker said. “But I remember going to the retreat for the Diocesan Council for Black Catholics. They reminded me of my grandmother, my aunt, my cousins. ‘OK, this is cool, this is uplifting.’”

Johnson was always fascinated by Catholicism, even receiving a rosary for Christmas while still Pentecostal. At UCA, he explored Catholicism, attending Mass at Catholic Campus Ministry. He went through RCIA in his hometown of Stuttgart.

“When I first joined, I did kind of think about that, there’s no Black people here. I have been in a lot of spaces in my life when I was the only Black person, and I've learned to navigate that,” he said. “... I kind of stick out a little bit. It wasn’t any hostile looks either but, ‘Oh, this is different.’ Some kids might turn around and stare a little longer than they usually would because I'm different than they’re used to seeing.”

“I guess it helped just to know that I can tell myself this is my Church just as it is anybody else's Church,” Johnson added.

While the Catholic Church has had a tumultuous history with race, including several religious orders not accepting Black people before and around the time of the Civil Rights Movement, the Church has readily condemned racism in recent years. This summer, as police took the lives of George Floyd and Breonna Taylor, people again took the streets to protest for Black Lives Matter. Bishop Anthony B. Taylor issued a statement that said in part, “Racism is a sin, and we have to admit that even as Church, we have not been immune to racial bias and the blindness to structures of sin that affect how our own institutions are run.”

Johnson said social justice issues have tied him strongly to the Catholic faith.

“Seeing pictures of nuns and priests on the front lines marching with them (during the Civil Rights movement) that made me excited ... That’s how God wants me to serve him, being inspired by the power of Christ.”

Vera Kanu, 14, a parishioner of St. Bartholomew Church in Little Rock, said Jeremiah 20:7-9 spoke to her as protests erupted, which states in part, “But then it is as if fire is burning in my heart, imprisoned in my bones; I grow weary holding back, I cannot!”

“God is saying this isn’t right,” Kanu said of racism. “As a Black Catholic, it makes me so angry that people believe in God, they’re Catholic, Christian and have these bad views on things.”

Mitchell, who has a 3-year-old son and teaches at Cloverdale Middle School in Little Rock, said the Church has not done enough to speak out against racial injustice.

According to statistics from The Center for Applied Research in the Apostolate (CARA) report, just 5 percent of religious in the 2018 profession class were Black. In CARA’s 2019 ordination priestly class report, 6 percent were Black diocesan and religious priests, compared to 70 percent white priests.

Booker, currently studying at Assumption Seminary in San Antonio, Texas, is set to be ordained a priest in 2025. He will be only the second Black priest ordained in the Diocese of LIttle Rock after Father Warren Harvey, ordained in 1988, whom he considers a mentor.

“I would say there’s an added responsibility to be the best that I can be because there aren’t many like me,” Booker said. “... It’s hard to put into words what it means to me personally that God would call me to do such a crazy thing. It’s just a testament to saying yes to the Lord and what he’ll do with that.”

Johnson said while he appreciates the traditional Euro-centric hymns, having more Gospel music and having more diverse artwork would help attract young people, Black or otherwise.

“Sometimes I do feel a little left out when that’s all we do,” he said of traditional hymns. “It’s not saying that we should get rid of and dismantle how things are done … I feel like the Church should kind of meet them a little bit. Especially this generation of young people, young Black Catholics, they’re not going to compromise who they are to be anywhere. The Church should widen it’s walls to accept everybody.”

Kanu said there are also many stereotypes to break and that all Black people are not drawn to the same style of worship.

“Let’s say in the media, in TV shows and movies, when they present Black people in church, it’s always jumping, having the Holy Spirit (in them) and singing, singing, singing and all that. It’s part of being in the Church, giving praises to God, but they exaggerate it so much,” she said.

Ultimately, it’s about listening and welcoming. Booker, who attends St. Bartholomew Church when he’s in Little Rock said, “They have done a lot for me, especially making me feel welcome and accepted and showing me there is a place for people like me in the walls of the Catholic Church.”