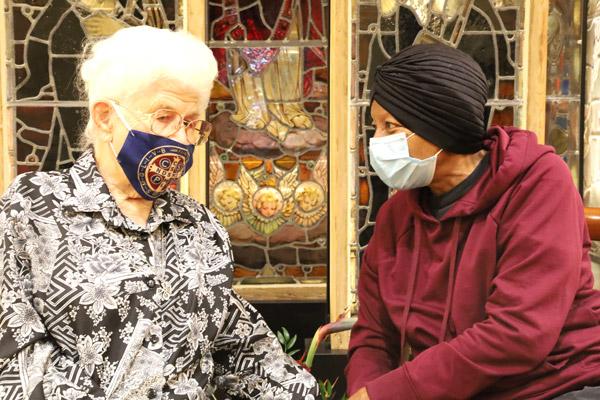 Read more about friendships that have led to great things:

Two women in the winter of their lives sit in regal high-backed chairs before a stained-glass backdrop. At a glance, they could be neighbors or bridge partners; charming, witty elders who have seen much in life and each other through the years.

“I see her all the time,” said Charolette Tidwell of her counterpart, Sister Pierre Vorster, OSB, of St. Scholastica Monastery in Fort Smith. She pats her mentor’s hand. “She still pushes me to be involved in the community.”

“I’m exceedingly proud of her and appreciate what she’s doing,” replied Sister Pierre, beaming. “She comes to visit me, and we have an opportunity to meet on different occasions and just out of the blue.”

Each woman is something of a household name in their respective circles. Tidwell, 74, a groundbreaking Black nurse and community activist, holds the key to the city. Sister Pierre, 98, has the drive out front named after her and has taught thousands of schoolchildren since entering the monastery in 1937.

But in their beginnings, it was hard to imagine how the two would ever cross paths, much less form a bond that would survive decades. There isn’t much to suggest a Black Baptist girl and a farm-grown Catholic nun could find each other during the racially polarized period of history in which they met.

“I attended St. John (the Baptist), the all-Black Catholic school founded by the Benedictine nuns. Sister Pierre was my elementary school teacher,” Tidwell said of her time in the school starting in 1952. "And even though I’m Baptist still today, my foundation with school, my faith with school, was started and strengthened from my parents, my grandparents, the community. And it was strengthened by the Benedictine nuns at St. John Catholic School.”

Sister Pierre, who taught sixth, seventh and eighth grades as well as served as principal at the closed institution, knew little about Tidwell during her school days, largely because the pupil barely spoke.

“I didn’t even know she existed,” Sister Pierre said. “You never heard a word out of her mouth. She was a good student, but she never said anything. She made her grades and did the work she was told to do. Didn’t cause any problems.”

Sister Pierre grew up in Subiaco and was already seasoned in the classroom when she was assigned to the 150-student school. It was not a role she initially embraced.

“I remember when I was given the assignment to go there, they broke my heart,” she said. “I knew nothing about Black people, and it was just a complete shock to my system. I didn’t know what I was going to do. But when I left there, I loved the place, and the people.”

By contrast, St. John was seen as the Promised Land for Tidwell. Her mother, Leodell Jones, believed in education so strongly she was willing to do almost anything to give her 11 children that gift.

“It was most important for my mom, academia, and that we really learned. And the discipline. It was those things,” Tidwell said. “Mom was not able to pay, so we helped her clean the school. And my mom was blessed by that. She wouldn’t have ever been able to pay for that private education.”

Few if any of the students were Catholic, but that didn’t sway the administration from running the school with a strong dose of religious heritage.

“The pastor said to any non-Catholic, ‘If you come to this school you will take religious instruction and you will come to Mass and you will sing in the choir,” Sister Pierre said. “‘Anything the Catholic students do you will be just like one of them.’”

“And we did,” chimed Tidwell. “My oldest sister even had the dream of becoming a nun, though she didn’t make good on that. I never considered it, I guess, because I was drug to the Baptist church. But I can read Latin. We were in the choir. We did Mass. We observed holy days.”

Sister Pierre was reassigned after six years, and Tidwell moved on to the city’s segregated high school. From there she would earn multiple college degrees in nursing and education that fed a 40-year career in health care, opening doors for many more nurses of color along the way.

Retiring from that, she would invest another two decades and her nurses' pension in Antioch Youth & Family, a hunger-relief nonprofit she started in 1999. Today, Antioch reaches 18,000 hungry people each month and has a 10,000-square-foot headquarters complete with a large garden and classroom space to teach children and families self-sufficiency.

“Secondly, it’s about faith. While I’m here I might as well do something. If I’ve got to stay here and look at something that makes me sad, then I need to help do something about it.”

Every step of Tidwell’s journey in community service Sister Pierre has carefully preserved in a scrapbook of clippings she will one day give her former pupil. It’s a habit she maintains for many former students, but especially the ones who, for six magical years, taught her so much about seeing through color to admire the many children of God.

“I got a complete education when I was assigned St. John’s,” she said. “I was just blown out of my mind because I’d been teaching at St. Boniface, which was across town from there, and had 57 students in the seventh grade. We never had a Black person in our whole community growing up. I was shocked.”

“When I walked in that door it didn’t take me long. It was the students there, and those were the best parents I have ever worked with. They brought me around. I got my education. It was a real growth process. And it’s not only Charolette, but I have others that I keep in contact with. It makes you feel so good.”

At that, the two women look at each other, eyes sparkling, no longer teacher and pupil, but sisters.

“I sure thanked him many times,” Sister Pierre said at last. “I think that I’ve been given a lot of good times in my span of years here.”

Read more about friendships that have led to great things: