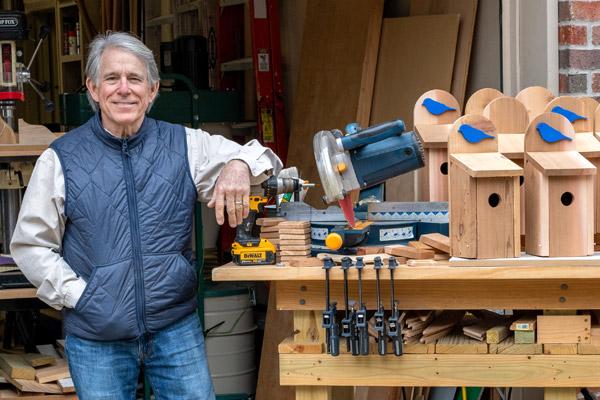 Why you want to know Raymond: Raymond Bertasi feels closest to God in nature. It’s why he has dedicated his woodworking skills to building bluebird houses the past five years to help protect and boost the bluebird population. As a fundraiser for Pax Christi Little Rock, a Catholic peace and social justice group, Bertasi is offering bluebird houses for a minimum donation of $75 to the organization. The Bertasis are close friends and neighbors of Drs. George and Sherry Simon, who serves as president of Pax Christi.

As a parishioner at Christ the King, Bertasi has served as an usher, eucharistic minister, participated in study groups and served for a year as president of the former Honduras mission board. Bertasi traveled to Honduras five times. He enjoys photographing wildlife and landscapes.

To order a bluebird house, email .

Career: A certified financial planner since 1973. He retired from Northwestern Mutual as managing director after 36 years and currently works as a consultant.

I started making these birdhouses for friends, neighbors and so forth and just giving them away. Then when we had dinner with the Simons it occurred to me, ‘You know I think I could make some birdhouses for Pax Christi for donations … Pax Christi reimburses me for the cost of the supplies in order to make it. So that’s just getting started. It’s in the infant stage right now.

You follow a standard design and make several at once. How long does it take to make each one?

It’s easier to make them in batches. So how much time does it take, it might take four or five hours maybe to make one.

You make the birdhouses out of cedar or cypress. Why add trim like the Pax Christi symbol and a cutout bluebird?

I've got some thoughts about having different levels of contributions and having certain things on the bluebird boxes and so forth … the objective of making birdhouses is not to make them look pretty, but it's to make them attractive to the birds, but in my case I thought you know if they look better, somebody might want them.”

One of my goals when I retired, actually in my retirement speech that I made to my fellow managing directors, one of one of my goals was to have a bluebird trail. And bluebird trails, how that started years ago was that bluebirds were almost extinct. And they’re very peaceful birds, they’re not aggressive. They’re in the robin family. The Audubon Society got people interested in bringing them back. So they have these trails (with bluebird houses). Now, they’re here in abundance. The more that you have these boxes, the more that they will come to your area. They have this melodious sound and very distinctive. I can walk out of the house and know if they’re in the area or not.

How does that desire to help bluebirds relate to your faith?

When I'm outside, I'm peaceful. I'm outside in prayer, you know you're talking all day, really, a lot of the day you're talking to your creator and enjoying the outside. That's been something attached to the photography as well, but it's something that I've experienced, most of my life is when I'm outside I feel closer to God. And the birds are so beautiful and they remind me of God's beauty out there.

You named your workshop “PAX Tiny Workshop.” Why have you dedicated your time and skills to benefit Pax Christi?

The sign in (my) front yard is from Pax Christi, and it says, “Pray for peace, work for justice.” And I'm going, “Is there anybody that could be against that?” Probably not. Does everybody want that? Probably so, almost everyone anyway. So what drives me is their objectives are around those two things. And they're a prayerful group. They try to seek out and find opportunities for peace, and to help other people, like Settled Souls, as an example, and they donate food; so many good things they do. Those backpacks for schools, that's awesome. That takes money, and they've got some good donors. But I'm going, what if they had a huge amount of money? I know they would spend it responsibly, helping the poor. So that's why I feel strong about them … My role is a background role. I'm in my workshop, putting things together, thinking about them and thinking about maybe we can raise enough money for them to do something even more powerful. They'll come up with the ideas, I'm not worried about what they do with the money at all.

Another hobby of yours is wildlife and landscape photography. How did that start?

I grew up in a farming community in Collierville, Tenn. … And my family had a farm, and I think I had an appreciation for the outdoors just because of that. My brother and I have a farm in Mississippi, so just the idea of the land, nature and so forth, I think that's where it started. And I started taking pictures when I was 14 years old, and I never fell out of love with photography. It captures a moment in time.