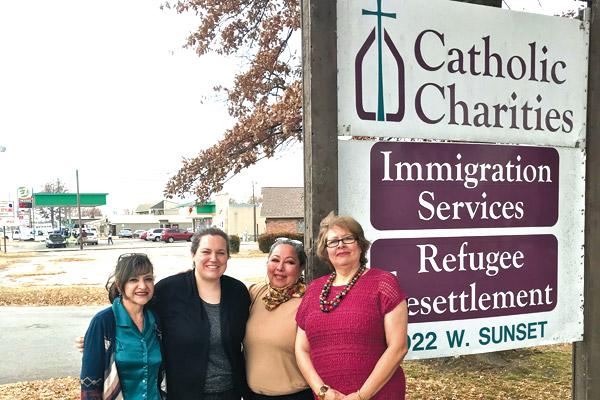 Catholic Arkansas Sharing Appeal had a successful year growing faith efforts in the state, even during the pandemic.

Diocesan development director Dianne Brady said the diocese was able to surpass its $2 million goal in 2020 by $59,549. The last time the diocese met or surpassed its goal was in 2015.

Brady said CASA kicked off Feb. 1-2 last year and had lots of support before the pandemic hit and public Masses were stopped in mid-March.

“We had a really strong start and continued as usual with pledge reminders,” Brady said. “We didn’t do our follow-up mailing in May but waited and combined it with the end-of-the-year mailing in November. Even though the number of donors was down, we had generous donors who gave a little more this year, I think realizing the pandemic would be affecting religious organizations as well as secular organizations.”

The diocese’s annual appeal will kick off in parishes at all Masses Feb. 6-7 with a video/audio homily from Bishop Anthony B. Taylor. Parishioners are encouraged to fill out a pledge card and make a one-time gift or a pledge over the next 10 months by check, credit card or cash. The campaign ends Dec. 31.

Because many people are still attending Mass virtually, the diocese mailed a letter from Bishop Taylor and a donation envelope this week to all registered families in the diocese.

Each family is asked to pledge 1 percent of their annual gross (pre-tax) income.

Like last year, almost every ministry and program in the diocese will be touched by CASA giving.  This includes:

• Diocesan ministries, $550,000: Diocesan offices, such as the Family Life Office and Hispanic Ministry Office, are able to serve Catholics across Arkansas because of CASA support.

• St. John Center renovations, $575,000: The diocese is continuing to renovate its diocesan buildings. In addition to weatherproofing the outside of Fletcher Hall, the diocese installed Wi-Fi in Fletcher Hall and a gas-powered generator for the IT department.

• Parish and mission support, $120,000: The diocese subsidizes the cost of priests and religious serving parishioners in financially challenged mission churches.

• Youth and campus ministry, $230,000: The Youth and Campus Ministry Office organizes programs and retreats for junior high to college students.

• Grants to Catholic schools, $100,000: Schools in need can apply for grants to buy educational equipment and materials.

• Catholic Charities of Arkansas, $100,000: The ministry operates a free medical clinic, prison ministry and two immigration offices among other programs.

• Catholic Adoption Services, $50,000: The adoption office helps dozens of women each year who are considering placing their unborn babies for adoption.