Grief spurred desire to try out tennis, becoming an opportunity for family bonding 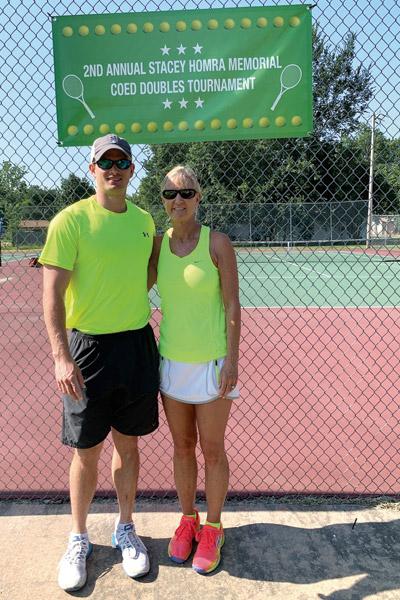 STUTTGART -- The neon green tennis ball ricocheted off the racquet head with a soft pop, headed straight for Lisa Pierce’s forehand. As she watched the trajectory of the ball’s bounce, Pierce set her feet and drew back for a crusher to win the point. The opposing doubles team’s eyes widened as they awaited the blow.

Before Pierce could pull the trigger, a dark-haired young man flashed in front of the ball, snatching the shot out of her wheelhouse. Off-balance, his shot settled harmlessly into the net’s midsection causing Pierce’s competitive spirit to boil over. She snarled at him to pay attention while her partner, Clay Shook, fiddled with his racquet strings and told her not to worry about it.

To the uninitiated, the banter sounds familial which, in fact, is what it is. To those who know them, it’s just a typical moment between Pierce and her 26-year-old son, en route to another doubles win.

“He’s so young and he moves around so well that he would take some of my shots,” Pierce, 58, said. “That didn’t always go over so well, if it didn’t work out.”

“We have our fair share of disagreements,” Shook said. “Every now and then there will be a ball that’s coming right to her, and I’m just running all over the place and I hit it into the net when she had a perfect kill shot. Hopefully those are few and few between, but they do happen.”

As any member of the Stuttgart summer tennis league will tell you, such gaffes are in fact few and far between for the mother-son combo. The pair teamed up for the first time in 2018 to play a local tournament, took second, and have become a familiar sight on the court ever since.

“Tennis is such a great release of any kind of tension or whatever you have,” Pierce said. “It is so great to go out there and be outside and be around people. Of course, laughing is always involved in tennis from the things that you do. And then, of course, there’s frustration, too. As a whole, it’s just a great activity to end the day.”

There’s no one way to handle the ups and downs in life. In times of trial or loss, each of us grieves differently, copes differently, recovers differently. Upon losing her mother in 2012, Pierce wanted something to hit.

"She died suddenly," Pierce said. “I knew I needed something for an outlet. I had been a runner in several half marathons but when my mother died, I was having trouble running just from anxiety and because of her death.”

Instead, Pierce called her former running partner Amy Johnson and almost on a whim suggested they take up tennis.

“I played a little bit of tennis with the family when I was younger, but never did I compete in a tournament or anything. It was just strictly family fun,” Pierce said. “Amy and I went out to the courts for several months and next thing you knew, we were playing tennis with a lot of different friends in town and having a good time.”

By the time that first tournament rolled around, Pierce was playing several times a week. Shook, on the other hand, brought more athletic ability than technique to the tandem.

"I played a little bit growing up, never anything formal, just messing around on a tennis court,” said Shook, an engineer at Producer’s Rice Mill. “Fast forward after college, I was looking for stuff to do after work and (Pierce) mentioned maybe coming and trying out tennis with them. I love sports and love to be outside so I figured why not, I’ll go try tennis.”

“The only time we had ever played was when he was like, probably, 6 or 7 and I would take him on the court and play with him,” Pierce said. “That was it. That’s what was so crazy about entering that first year and getting second place.”

It’s not the first time Shook has been coached by his mother. Both attended Holy Rosary School in Stuttgart growing up and when Shook and his older brother Steven were there, Pierce served as volunteer P.E. coach. He said her ability to direct the action is one thing that makes them so good as a doubles team, stolen shots notwithstanding.

"She’s so much more knowledgeable about it than I am. She plays a lot more than I do so she’s essentially the coach on the court, so to speak,” he said. “I’m almost like an Energizer Bunny or a golden retriever chasing a tennis ball. You’ve just got to kind of plug me in the right direction and off I go. We’re a good combination of her skill and knowledge and my energy running around the court.”

And so tennis has not only been therapy, but a way for mother and son to connect in an activity they’ve both come to see as more than mere exercise.

“Oh, it’s awesome,” Shook said. “I look forward to it anytime we get to go play. Even in the summer league we’re not necessarily together every night, but when we do get matched up, whether it’s with each other or against each other, it’s still a really good time. I’m definitely grateful for that.”

And as for those times they’re across the net from each other? Shook grins.

"I think she enjoys picking on me when she can,” he said. “But I try to return the favor there as well. Keeps things interesting.”