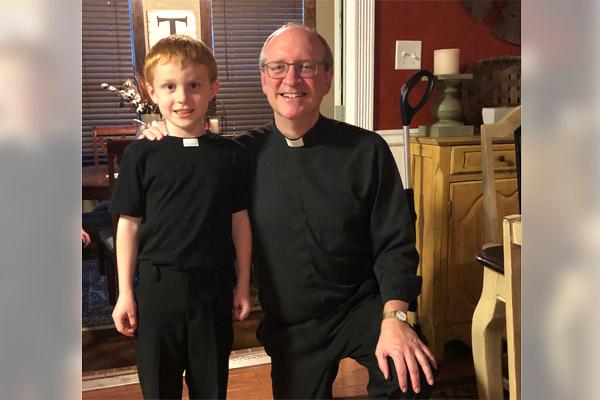 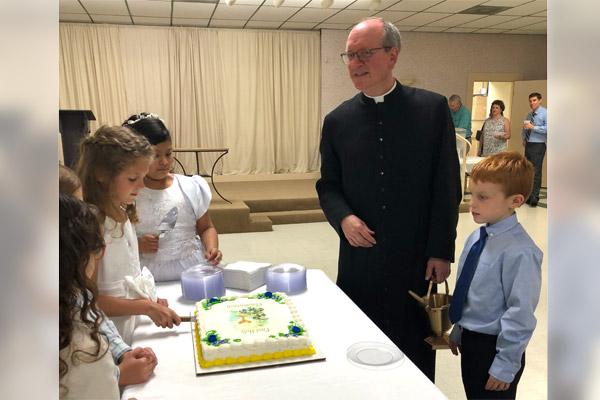 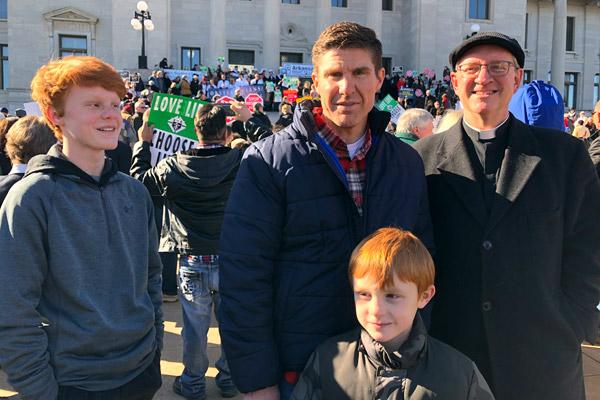 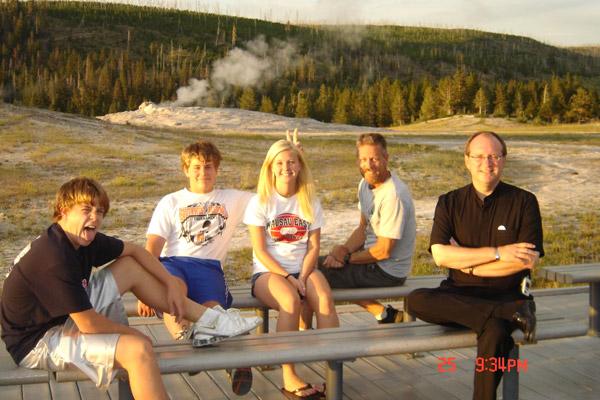 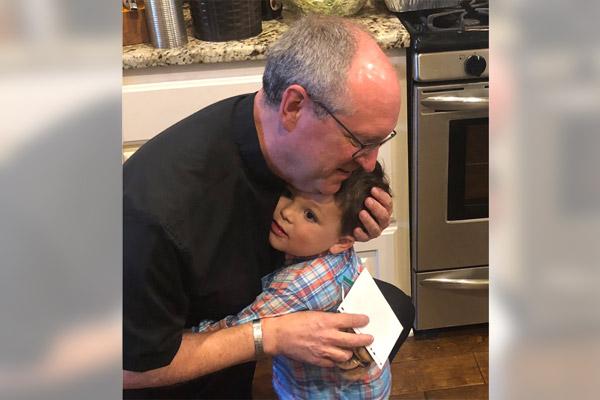 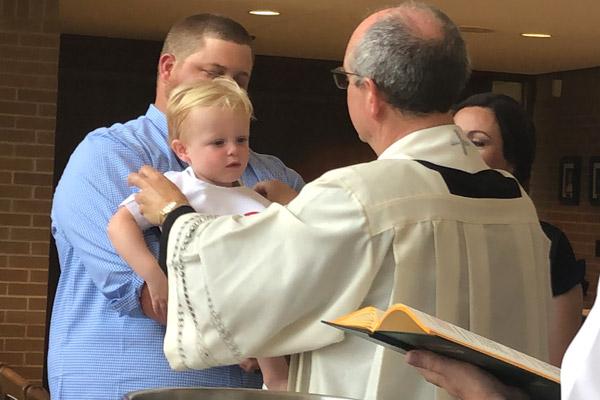 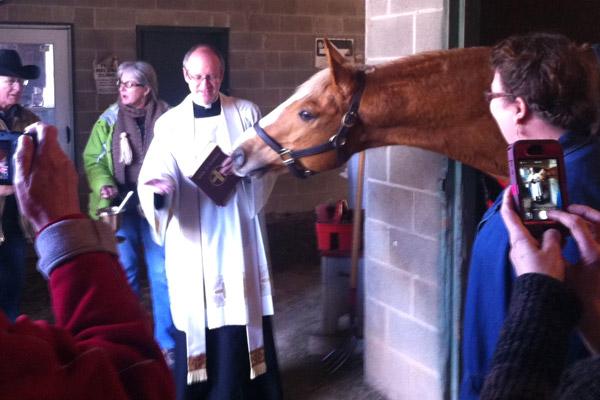 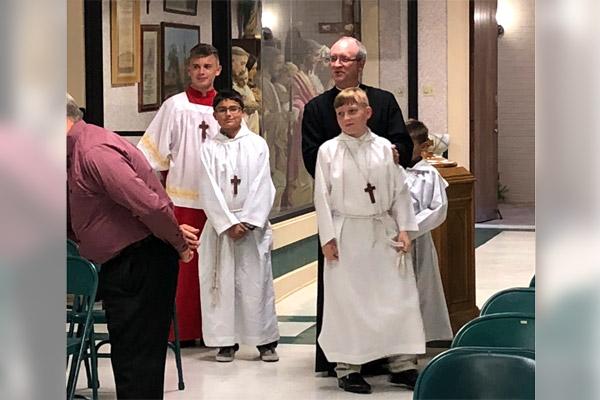 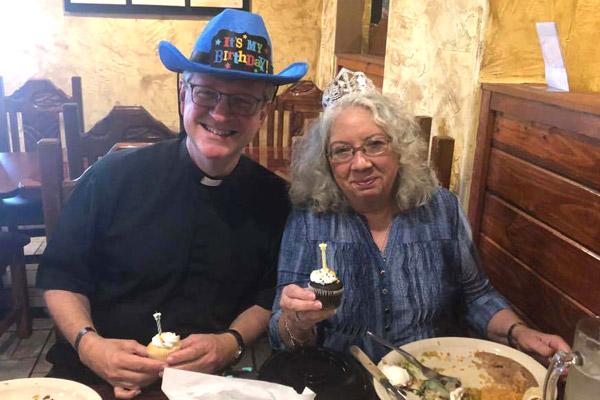 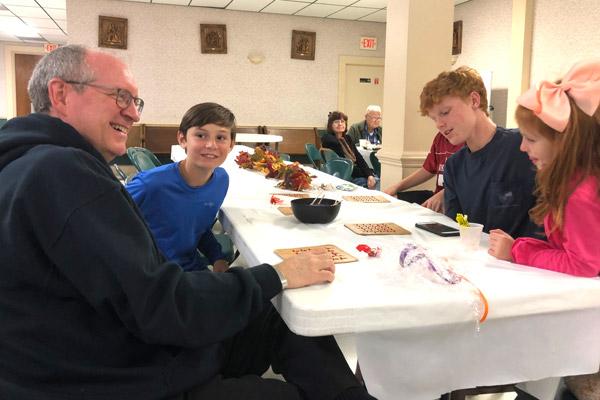 Courtesy Thompson family
Father James West plays Bingo at St. Edward Church in Texarkana in October 2019 with Joey, Jacob and Emmalyn, three of the five children of Donny & Melissa Thompson. The family would go out to dinner each month with Father West.

Courtesy Thompson family
Father James West plays Bingo at St. Edward Church in Texarkana in October 2019 with Joey, Jacob and Emmalyn, three of the five children of Donny & Melissa Thompson. The family would go out to dinner each month with Father West.

Six hours and a smile helped lay the groundwork for God’s plan in the life of Father James West.

Born six hours after the cutoff date to begin first grade in public schools in Texas, his mother Evelyn Anne West did not want to hold her brilliant son back a grade. Though not Catholic at the time, she took him to Sacred Heart School. It was just one year, but it instilled in him a deep love for the Catholic faith.

“He always had a smile on his face, no matter how bad a situation looked, that smile was there always,” his mother said. “He changed people’s lives and so much of it was with that smile.”

Though the one-year anniversary of his death, March 8, 2020, will be one of sadness, it’s also a celebration of a life that devotedly lived out Jesus’ call to “love thy neighbor.”

Father West, 59, was found dead in his rectory from a heart attack. He had served as pastor of St. Edward Church in Texarkana, his home town, for three years.

His funeral was the final Mass at St. Edward following the bishop’s order suspending all public Masses at the onset of the COVID-19 pandemic in March.

“They had the double trauma of losing a pastor and then COVID,” said Father William Burmester, who took over as pastor of the parish in May. “It’s an even deeper wound, so I think it takes more time to heal and allow Christ to show where he is in all this. It takes a whole lifetime.”

During Masses March 6-7, a picture of Father West will be displayed and prayer cards with his photo available for parishioners. Father Burmester said he hopes in October, around the feast of St. Edward, it will be safer to have a larger gathering, inviting parishioners from his other parishes, most notably St. John in Hot Springs and Immaculate Conception in North Little Rock, to memorialize him further.

“I could hear people standing together telling stories of Father as they were looking over something, so I do think it helped quite a bit for people to do that,” said Dana Sharpe, janitor for St. Edward.

But even death cannot extinguish his legacy of his love.

“He had a way of making everybody feel they were the most important or special to him. You really did feel that in his presence,” Sharpe said.

A native of Texarkana, Texas, Father West was born Sept. 2, 1960. He was observant from the start, quietly learning to tackle any obstacle.

“He learned how to tie his shoes when his little hands were not able to make a bow. To the day of his death, God love him, he tied his shoes backwards, left handedly. Because he was watching me,” his mother said.

He was ordained to the priesthood at just 25 years old May 31, 1986, first serving as associate pastor at Christ the King Church in Little Rock under pastor Msgr. Gaston Hebert.

“He always said, ‘If I could have had a son, it would have been Jim.’ They just adored each other. They loved each other so,” Evelyn West said of her son and Msgr. Hebert.

Father West was dedicated to speaking out against abortion, starting vocations programs for young people to explore God’s call and supporting Catholic churches in Russia.

But Father West’s greatest ministry was one of encounter. Shortly after his ordination, he was confronted by a woman in a Little Rock hospital parking lot. She was hysterical, but asked him to run with her, so he did. Her daughter’s baby was about to die; he held and baptized the child.

“The very first person he baptized was the baby he buried,” his mother said, as the family asked him to celebrate the funeral. “He was always there. He was amazing. That’s why people loved him.”

The first Saturday of the month, Father West would go to Johnny B’s restaurant in Texarkana with Donny Thompson, his wife Melissa and their five children, each fighting for the seat closest to their pastor.

“He made it a part of his life to be a part of our lives,” Donny Thompson said. “He was there for every birthday with a card for them. He had nicknames picked out for them.”

At one Saturday Mass, Father West told their son Owen, now 10, knowing he felt a calling to the priesthood, “‘This is going to be the greatest day of your life Little Man,’ that was his nickname, because he was going to get to serve” on the altar for the first time, Thompson said.

“He made it so fun,” Melissa Thompson said. “He took (altar servers) on the trip, in July we’d go to Hot Springs and go bowling and swimming. He was just so easy to be around, so funny and always had a good story. My boys just really loved him.”

Victoria Shelton, a bilingual secretary at St. Edward, said Father West was the perfect example of a servant.

“On several occasions, I’d say, ‘I need a Jesus hug.’ And he would say to me, ‘Me too,’ and we’d embrace, and I could really feel the presence of God in him, that he was loving and accepting me just the way I am, the way God accepts me,” Shelton said.

Brenda Engel worked for Father West about 18 years, first at Immaculate Conception and then St. John Church and would commute 150 miles to Texarkana from Little Rock part of the week to help manage renovations at the Texarkana parish. Close to the Engel family, their children served on the altar for him and he went with them on family vacations. He was the first phone call they made when their son, Zach Engel, was killed in a car accident at 20 years old, June 18, 2011.

“You can ask anybody that has been to a funeral, he was profound at bringing that person to life,” Engel said. “He could absolutely get to the essence of who that individual was. Even if he did not know that person well, he’d spend time with the family, he’d ask questions and tie it into the faith and Scripture.”

He was more than a pastor to her, but a brother. The two spoke or texted daily.

“I asked him one time, ‘Do you ever get lonely?’ He looked at me and said, ‘No, I’ve never been lonely a day in my life. I love being a priest.’”

When Father West did not respond to her text March 8, 2020, she knew something was wrong.

“There’s not a doubt in my heart where he is and he’s abundantly happy … My heart hurts, I miss him. There’s so much more good he could have done,” Engel said. “He was so incredibly available to people in times of crisis.”

While not canonized “St. James West” yet — he’d likely laugh at the suggestion — it is how his flock has and always will see him.

“Even now it’s so raw ... I'm still grieving,” Shelton said. “Then on the other hand, the consolation we know we have an advocate in heaven to help us with our trials here, until we meet again.”