Academy seniors enjoy the finesse, skill it takes to excel at girl's lacrosse 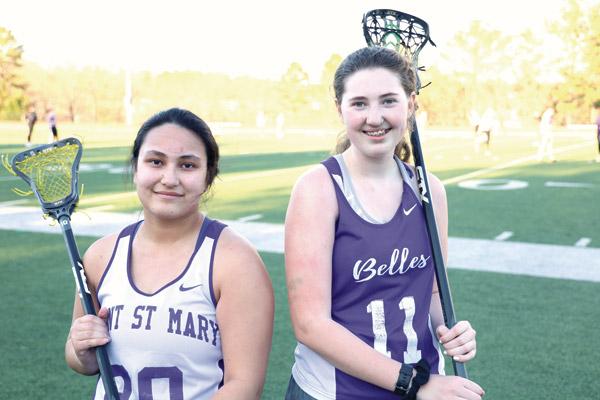 Except for their grade and the common uniform in their team’s colors, there’s very little that Sene Harness and Elise Smith hold in common at first glance.

Harness, of Samoan descent on her mother’s side, runs with power even at half speed, changing direction on a dime. Smith, fair and blonde, is taller and runs with a long loping stride that appears as if she’s gliding.

Peel back a layer and you discover other differences: Growing up in Immaculate Conception Church in North Little Rock, Smith was a multi-sport athlete, up for whatever was in season. Harness stuck to volleyball at the former St. Edward School in Little Rock, among the most diverse in the diocese.

But for whatever else may contrast them, in things that are important the two girls are of one mind. Friendship, for one. And lacrosse for another.

“I saw it on TV once and thought, ‘That’s what I want to do,’” Smith said. “It wasn’t like any sport I’d seen really. It just looked really fun.”

“Elise wanted me to try out,” Harness said. “When I started high school, I was quite shy. But when I started playing lacrosse and meeting new teammates, I really became more confident and really opened up to more people.”

Fast forward two years and both athletes are cornerstones of the Mount St. Mary lacrosse program, a club sport rapidly finding a foothold in high schools coast to coast. Originating among Native American tribes, lacrosse combines the speed of soccer with the deft hand-eye coordination of hockey.

Players are equipped with a stick that has a shallow basket on one end with which they handle a low-bounce rubber ball roughly the size of a tennis ball. The object is to score points by firing the ball into a goal, using only the stick.

“My first two practices I found it quite easy to pick up, like the catching and the throwing and the shooting,” Harness said. “I would say the biggest transition was definitely the running because in volleyball you’re just steady on the court and lacrosse there’s a lot of running.”

High school girls’ lacrosse is non-contact the way soccer or basketball is non-contact, a major difference to the boys’ game. Smith said she prefers the finesse required in her game versus just looking to hit somebody.

“It’s not as physical as the guys’ game which is what I was exposed to first,” she said. “The guys are more like, shove, push, let me get the ball. Where the girls’ game is more skills: I’ve got the ball, I’ve got to try and pass or do a bunch of dodges so I can get to the goal.”

The Mount’s program is only in its second year but has had no problem finding competition, given the rapid proliferation of state and regional high school programs. Kristen Marr is a MSM mom who runs Little Rock Lacrosse where many players in the Mount and Catholic High programs got their start.

“Little Rock Lacrosse started 11 years ago for youth, and three years ago split into high school teams,” she said. “That was the whole goal, to develop enough youth to be able to start the high school league, which is now the Natural State Lacrosse League.”

Little Rock Lacrosse starts athletes in third grade and its summer camps attract college coaches from all over the country to help develop skills. It’s had an immediate effect on the quality of play, too. As Marr proudly notes, four Belles have already advanced to the college ranks.

Harness will be one of them, bound for Hendrix College in Conway. She said even though as a club sport, there’s no opportunity to play for a recognized state title, her time in lacrosse has helped her develop skills that transcend the field.

“Lacrosse has definitely helped me develop more confidence in school and especially with meeting new people,” she said. “I was always very hesitant to try things because I was always bogged down by the pressures of ‘Oh, people are going to judge me.’”

“Lacrosse has very much improved me as a person, and I would definitely push others to try something new and really just put themselves out there in order to improve themselves.”

Smith has no intention of playing competitively at the next level but hopes to seed a recreational or intramural program in college. Given her recruiting skills, it’s an idea destined to succeed.

“My brother Will got exposed to the sport by me,” Smith said. “He’d come to all my lacrosse games and now he’s actually started playing his freshman year at Catholic High. He really enjoys it, even though I’m better than he is.”

“I’m glad I got Sene to come out here with me. We got to play and I fell in love with it. Socially, I’m kind of a shy person who doesn’t really make friends easily. So being able to have a friend group with my team is amazing.”