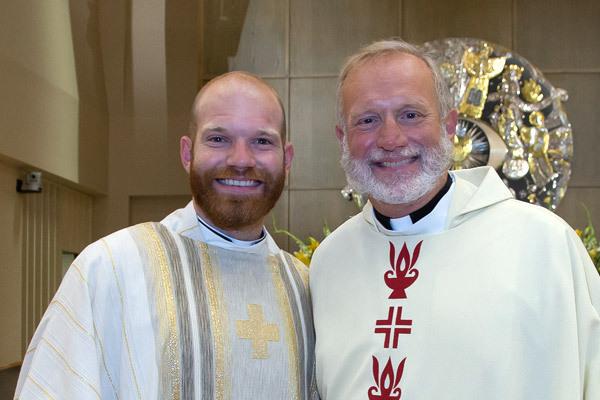 Bishop Anthony B. Taylor announced during the Chrism Mass March 29 at Christ the King Church in Little Rock that he has appointed Msgr. Scott Friend, diocesan vocations director for the past 16 years, to be the pastor of Blessed Sacrament Church in Jonesboro beginning June 15. Msgr. Friend also served as vicar general under Bishop J. Peter Sartain and Bishop Taylor  from 2005 to 2019.

“I wanted to use this moment for me and you to express our appreciation for the ministry of one of the most remarkable priests who will have a change of assignment this June,” the bishop told the priests in the audience. “Msgr. Scott Friend requested to return to parish ministry, his first love, and I can tell you it is the best job in the Church.”

When Msgr. Friend was appointed vocations director in 2005, there were 15 seminarians, and he was suffering from Multiple Sclerosis, along with other health conditions.

In spite of this, he made the Diocese of Little Rock vocations program “one of the most fruitful in our nation,” Bishop Taylor said.

Msgr. Friend partnered with several groups, including the Knights of Columbus, Serra Club, parish youth groups and Catholic High School in Little Rock to foster vocations. He founded the popular fundraiser Taste of Faith dinners and the House of Formation, where lived with seminarians and discerners.

Out of 67 diocesan priests in active ministry, 44 had Msgr. Friend as their vocations director. Following this year’s ordination with five priests, there will be 23 priests in formation and three applicants for this fall, Bishop Taylor said.

The average age of priests lowered from 65 to 48 during Msgr. Friend’s time as director. A heart for Hispanic ministry, Msgr. Friend encouraged growth in vocations among Spanish-speakers. In 2005, there were 10 priests who could minister in Spanish, with one Hispanic priest in active ministry. Now there are 55 priests who can minister in Spanish, more than half fluently, and 13 Hispanic priests in the diocese.

“Eighty-two percent of our priests can minister in Spanish to some degree, and Msgr. Friend, you are the one who has made that happen,” Bishop Taylor said.

Msgr. Friend told Arkansas Catholic, "I am both grateful and excited to see what the Lord has in store for all of us in Blessed Sacrament parish in Jonesboro."

Other priest assignments will be announced April 9 and also go into effect June 15. The bishop’s comments and the entire Chrism Mass can be viewed at youtube.com/cdolr.