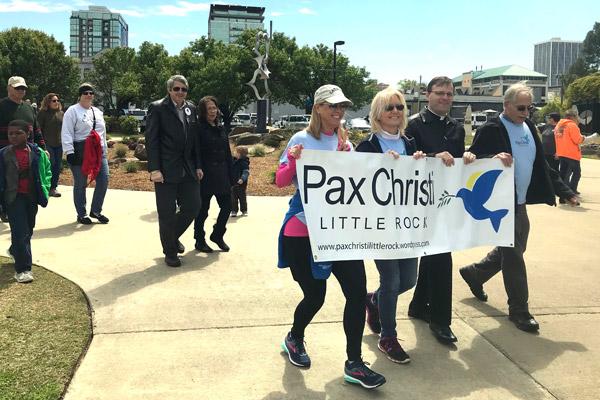 Pax Christi Little Rock will host the 7th annual Pilgrimage for Peace April 11 to bring attention to victims of violence, particularly those killed the past two years in Pulaski County.

It is the first year for the Catholic social justice organization to plan the interfaith walk, founded by Caroline Stevenson, a member of St. Michael Episcopal Church in Little Rock.

“The Catholic Church has such influence in the world and so I’m really happy that Pax Christi is working in the peace field,” Stevenson told Arkansas Catholic. “I just think it’s so important for all faith groups to stand up and say violence isn’t our creed ... I applaud the Catholic Church and Pax Christi for taking the lead.”

The pilgrimage, starting at 2 p.m., will be a 1.3 mile walk from Heifer International headquarters in downtown Little Rock, over the Junction Bridge to the Beacon for Peace and Hope garden at North Shore Riverwalk Park in North Little Rock, where a remembrance service will start at 3 p.m. Participants will read nearly 170 names of people killed through violence in Pulaski County in 2019 and 2020, compiled from news reports, along with Scriptures, prayers and music by Fire and Brimstone.

The remembrance service will be livestreamed at facebook.com/PilgrimageforPeaceLR and more information is on its website, pilgrimageforpeace.com.

It is a free event, though attendees will have an opportunity to donate. About 24 local groups, including the Diocese of Little Rock and Christ the King Church in Little Rock, are sponsoring the event with a donation of at least $25.

After expenses, money raised will be donated to the Center for Healing Hearts and Spirits. The Little Rock organization provides services including grief counseling and emergency domestic violence shelter services for victims of crime and their families and other vulnerable members in society, like teen parents, according to its website hhscenter.org.

Pax Christi board member Mary Hunt, leading the pilgrimage committee, said last year’s pilgrimage was canceled because of COVID-19. Masks and social distancing will be required.

While the pilgrimage is focused on remembrance, Hunt said she hopes attendees will think about ways to get involved in stopping violence in their communities.

“We cannot forget. I believe people have become desensitized to all the violence in the world. We have to remember” the victims, Hunt said. “We have to remember these victims and to get some fire in us to change it.”

Stevenson, who is still involved as a committee member, said she knows what it’s like to have a family member killed from violence, as her son was killed in the 1988 Pan Am Flight 103 bombing  over Lockerbie, Scotland, which killed 259 passengers and crew members.

“A 10-year-old girl was killed the other day in one of our parks, she was shot,” Stevenson said of Ja’Aliyah Hughes, who police said was accidentally shot March 13, caught in the crossfire after an argument broke out between two others in Boyle Park, according to local news reports. “Every day we see victims of violence, and it can be domestic violence and it can be just random, or drug-related violence. It’s just so useless … We just keep promoting guns and violence.”

Sherry Simon, president of Pax Christi Little Rock, said the organization’s goal is to follow nonviolence, teachings that Christ revealed in the Gospels.

“So if we are truly to be a force for nonviolence in our world, we must involve like-minded peacemakers regardless of their faith tradition,” Simon said. “Our world is at war with itself on so many levels. This is not a time for isolating into our own small groups, but rather a time to connect in love with all who are willing to work for that ‘peace that surpasses all understanding.’”

For more information, to become a sponsor or to donate, email . Donations through Paypal are also accepted at paxchristilittlerock.org/join-us.