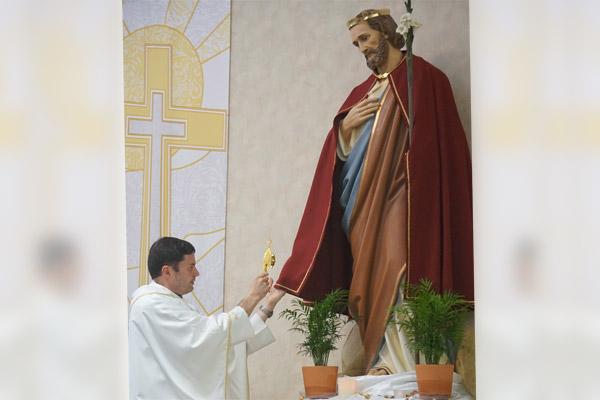 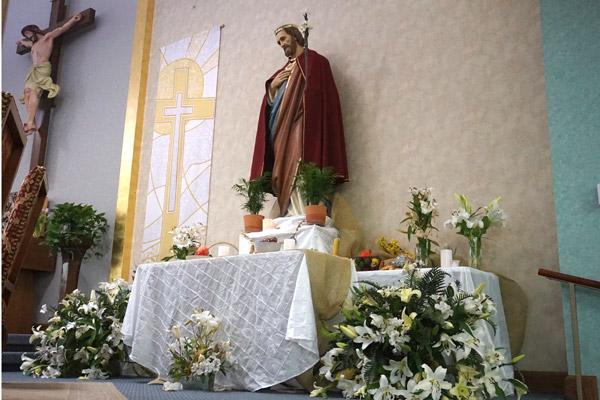 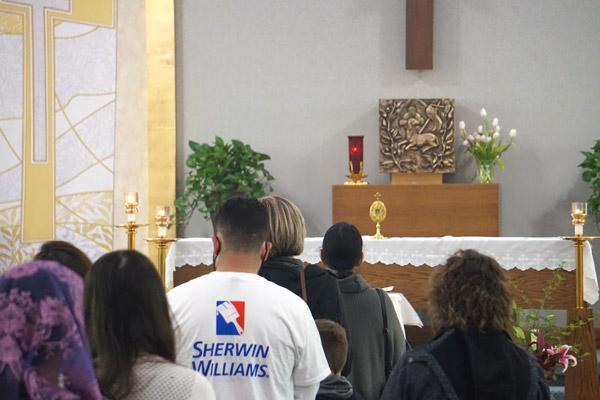 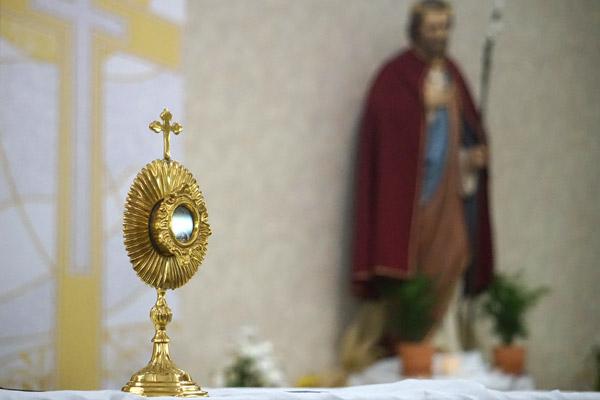 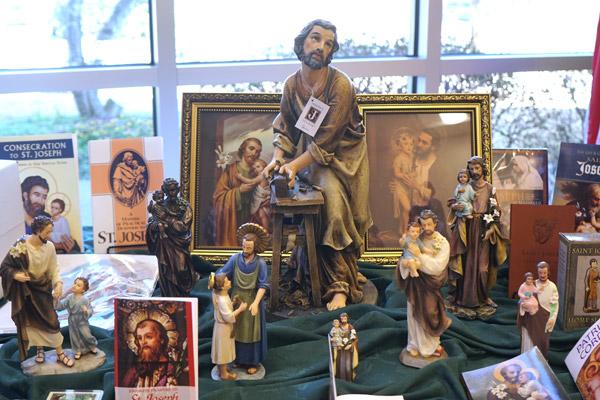 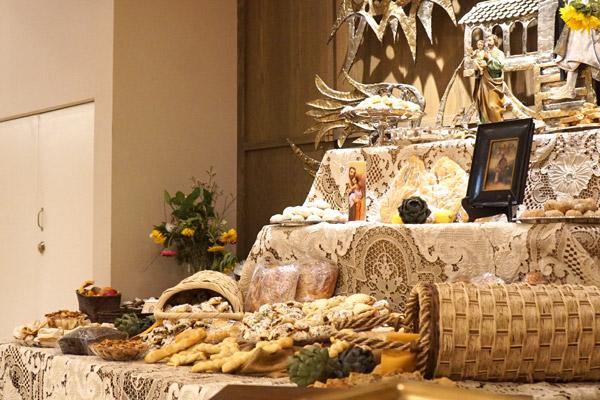 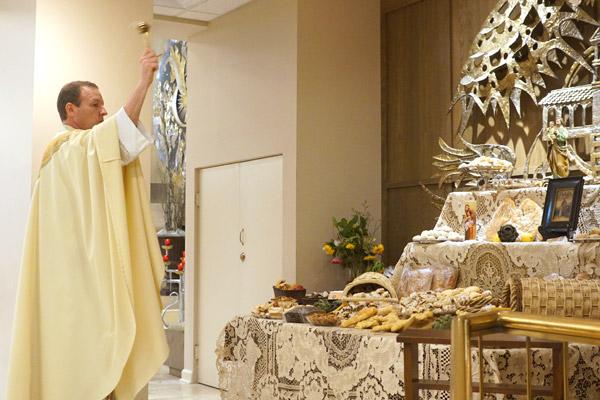 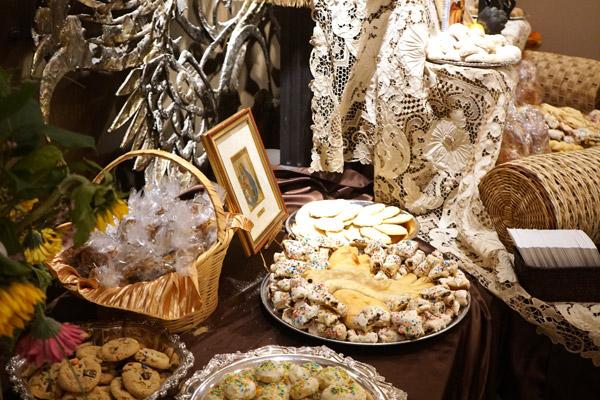 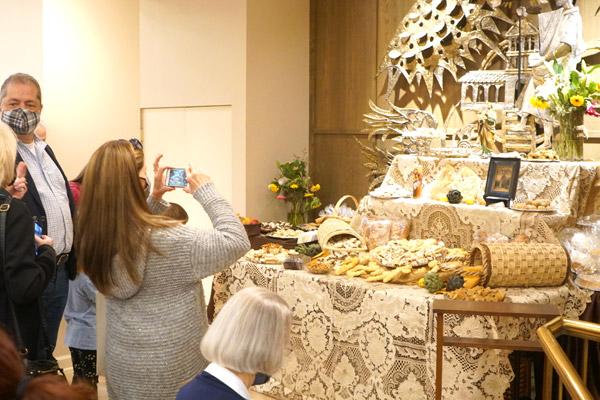 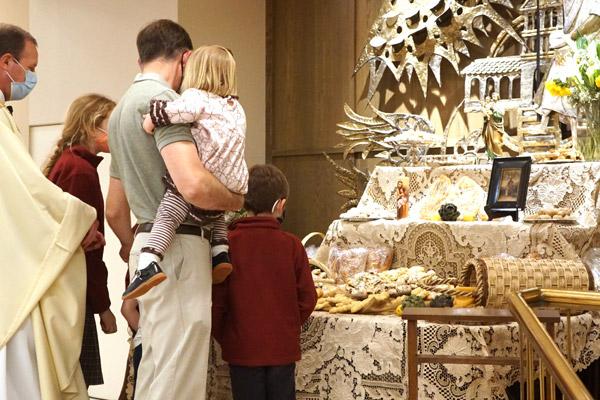 Malea Hargett
Pastor Father Erik Pohlmeier and a family look over the St. Joseph Table at Christ the King Church in Little Rock after the March 19 Mass.The parish is planning to host a larger event in 2021, including a meal.

Malea Hargett
Pastor Father Erik Pohlmeier and a family look over the St. Joseph Table at Christ the King Church in Little Rock after the March 19 Mass.The parish is planning to host a larger event in 2021, including a meal.

Parishes across the state honored St. Joseph with prayerful activities.

Springdale, Our Lady of Sorrows

St. Joseph has many titles as a patron saint, from the saint of fathers, families and workers to the saint for a good death and against doubt and hesitation.

But for Father Tony Robbins, pastor of St. Joseph Church in Conway, the foster father of Jesus could be considered the saint of “Well, this is a big surprise” or “I didn’t see that coming,” a perfect intercessor for an uncertain time of pandemic.

“That’s a lot of what we’ve been facing today,” he said. “How do we navigate this life when things have been demanded upon us that we’ve never had to face before? St. Joseph had that similar situation several times in Scripture, in just having to take action and do things for the good of the Holy Family, and we are having to do that in response to this pandemic. We have got to make some changes, for how long we don’t know, but we know the Lord is going to lead us onto the next thing we need to do when the next thing comes.”

It’s providential then, he said, that Pope Francis declared Dec. 8 the beginning of the Year of St. Joseph, marking the 150th anniversary of the saint as the patron of the universal Church. His apostolic letter “Patris Corde” (“With a Father’s Heart”), released the same day, discussed the ways St. Joseph embodied a father’s love, including obedience, acceptance and creatively courageous action.

“Joseph found happiness not in mere self-sacrifice but in self-gift. In him, we never see frustration, but only trust. His patient silence was the prelude to concrete expressions of trust,”  the pope wrote. “Our world today needs fathers.”

Parishes around Arkansas honored St. Joseph on his feast day, March 19, though more subdued than usual because of COVID-19 safety protocols. (See sidebar). Some will honor him on his other feast day, May 1, for St. Joseph the Worker.

Some parishes, like St. Joseph in Conway and Christ the King in Little Rock, have built the traditional St. Joseph table or altar, a Sicilian tradition that dates back to Medieval times when Sicily experienced a drought. They prayed for the intercession of St. Joseph and the harvest provided “one heck of a feast,” said Mike Kelley, a Christ the King parishioner of Sicilian descent. St. Joseph altars are common in cities with a strong Sicilian heritage like New Orleans, where Kelley grew up.

Altars can be a variety of sizes, some with three tiers each holding a statue of the three members of the Holy Family, Jesus, Mary and Joseph. They include foods, both sweet and savory, from traditional Italian cookies and desserts to a meat-less pasta with anchovies and a whole egg, to symbolize the coming of Easter, Kelley said. Other symbols and traditions are associated with the table, including adding fruit.

“If a girl goes to a St. Joseph altar and steals a lemon, she’ll get engaged,” Kelley said.

Kelley said he’s excited to help out the team of about 30 people who put together Christ the King’s St. Joseph table. His 104-year-old grandmother who lives in Mississippi called to tell him, “‘I can’t tell you how proud I am that you’re keeping up this tradition.’”

The altar with traditional Italian cookies, breads and cakes was unveiled at the parish’s March 19 feast day Mass. Committee chair parishioner Raymond Bertasi said all food placed on the altar was given to local charities Jericho Way, Abba House and Our House.

“We’re distributing holy cards as well, just to bring some attention to the Christian faith given to others, and to share these wonderful breads and cookies with other people” in need, Bertasi said.

As a stepfather, Kelley has prayed to St. Joseph for his intercession.

St. Joseph in Conway led a seven-Sundays devotion for St. Joseph, contemplating the seven sorrows and joys of the saint. Parishioners could also sign up for a parish-wide consecration to the saint, using the Father Donald Calloway book “Consecration to St. Joseph,” with weekly virtual discussions. The parish typically makes a St. Joseph table, but this year it is in the main sanctuary instead of the adoration chapel. It was taken down after his feast day. The March 19 Mass also featured a relic of the cloak of St. Joseph from Father T.J. Hart, pastor of St. Francis of Assisi Church in Little Italy.

Father Robbins said he personally feels called to “come and see” how a devotion to St. Joseph will impact his life. Beyond the saint perfecting the idea of “pivoting,” changing plans quickly, Father Robbins said St. Joseph also knows what it's like to lose the Lord after losing the child Jesus for three days.

“I think there are a lot of people going about this world lost,” he said. “St. Joseph, he didn’t give up on his search; he and the Blessed Virgin continued until they found Jesus. They were reunited again. That is a great message of hope, especially for people that feel lost. If you don’t know where God is in your life, St. Joseph has already been there and done that and he can help you until you are secure in your relationship with the Lord again.”

Parishes across the state honored St. Joseph with prayerful activities.

Springdale, Our Lady of Sorrows