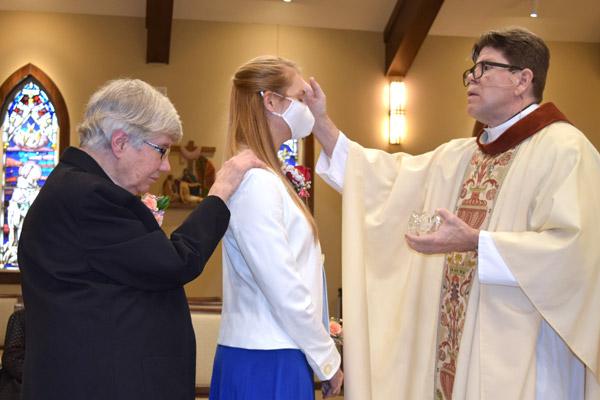 FORT SMITH — Jennifer Burchett’s spiritual journey to Catholicism began in March 2018 when she began working as the communications director of St. Scholastica Monastery.

She brought extensive experience in non-profit organizations but feared her lack of knowledge about Catholicism, and churches in general, might be an obstacle to her success.

“I wasn’t raised in a religious home,” Burchett said. “When I was in junior high school, I went to a Baptist church in Lubbock with a school friend for a few years and was baptized. My faith was very much tied to my Bible, which had so many notes scribbled in it. The ideals in the Bible were a part of me even when I stopped going to church.”

As a wife and mother of twins River and Mya, now 8, and Shiloh, 6, Burchett and her husband Jonathan would talk about God, spirituality and faith. They identified with God most in nature, often going on Sunday morning hikes and outings to parks. They brought their children to community service projects and stressed the importance of doing good in the world and linking work to prayer.

“My first approach to my new job was intellectual,” Burchett said. “I read the monastery histories to learn about the community. Sister Elise (Forst, OSB) would often have to explain words and concepts to me, even words like ‘catechism.’ I tried to get to know all the sisters because they have a very spiritual essence that isn’t always out in public view. I grew to realize that as I tried to understand their faith intellectually and opened up my heart to them so I could write on their behalf, I began to want to become Catholic.”

Shiloh, who was attending St. Boniface day care, was also learning about Catholic faith. He reminded his family to say grace before meals and taught his siblings how to make the sign of the cross.

“I began emailing with Diane (Willis, St. Boniface RCIA director) in the summer of 2019,” Burchett said, “and began attending (RCIA) classes that fall. I knew I wanted to be in St. Boniface because the sisters had a strong connection with that parish. At first, I didn’t know who I was going to ask to be my sponsor because the entire community sponsored me. Seeing how much the sisters love openly without reservation or boundaries spoke very loudly to me.”

Eventually Burchett asked Sister Elise, who had shown her all the customs, rituals and history of Catholicism, to be her official sponsor, and brought in Sister Macrina (Wiederkehr, OSB) as a co-sponsor.

“Macrina appreciated the spirituality of the natural world, and that’s something that really connected us, along with our writing,” she said. “We’d talk about poetry or our books or random things, and sometimes we’d just hang out. Elise taught me how to keep spirituality intact in work that sometimes has little to do with it, to think one step at a time and keep goals in mind.”

When Sister Macrina was diagnosed with a brain tumor in late 2019, Burchett burst into tears. “We were just getting started on this beautiful friendship, and I couldn’t imagine that it would end so soon,” she said. “She didn’t fear death, embraced it bravely, like another season. She went there and let it go. I decided to choose St. Macrina as my patron saint.”

When COVID-19 prompted the diocese to close all RCIA classes and public Masses, Burchett was unable to join the Church at the Easter vigil in 2020. She received permission to be confirmed at St. Scholastica Nov. 1.

“Because all the sisters were quarantined, and I thought of them all as my sponsors, it was the only way that they could be present at my confirmation,” Burchett said. “I became a Catholic on All Saints’ Day, with my family, all the sisters, and Diane Willis present. Father Mario (Jacobo, St. Boniface pastor) was unable to be there, and so Father Les (Farley, St. Scholastica chaplain) brought me in.”

Willis said, “Jennifer has so many beautiful gifts to share with us at St. Boniface.”

Jonathan Burchett and the three children have not begun the RCIA process.

“There is more than one way to give praise, and service is very important,” she said. “RCIA was such a meticulous and spiritual way of bringing church into my life. I still feel like an infant in the Church. I told Diane, ‘I don’t know everything yet, but I will be learning my entire life. Striving for sainthood is just the first step.’ I needed to weave Catholicism around my own spirituality, but at each checkpoint it worked. It’s almost as if the beliefs I acquired naturally fit into the structure of the Catholic Church.”

Click for the Love wins when faith finds its home index