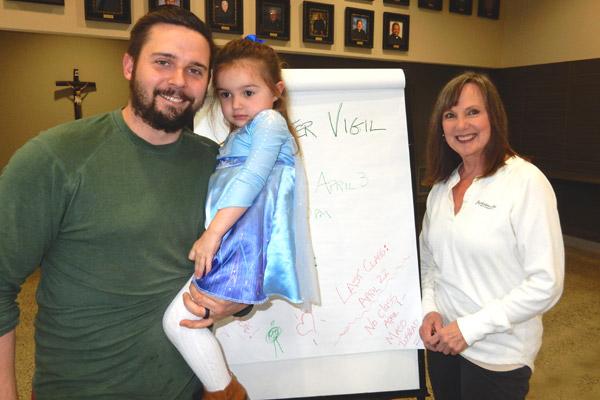 HOT SPRINGS -- Four years ago Ryan Burton was curious about joining the Catholic Church and he hasn’t stopped learning.

The 31-year-old body shop estimator drove past St. Mary Church in Hot Springs several times and liked the beauty and the setting. He finally walked inside and later met the former pastor, Father George Sanders, who provided him with information on the steps to join the Church.

“I was driving by and I had this strong urge to go inside,” Burton said. “I thought, ‘I want to be part of that.’ ”

He joined the Rite of Christian Initiation for Adults (RCIA) program offered at St. Mary Church and converted to Catholicism in 2019.

Burton, who is married to Angela and has one daughter, said he wanted to learn more about the Church and returned to RCIA as a student the next year. He then began setting up audiovisual equipment and helping run the weekly program.

“I started going back to learn more. I studied more about our faith. I enjoyed it so much,” Burton said.

When the program resumed in August, he became a part of the RCIA team at St. Mary by teaching the class on angels.

“I do a Powerpoint on angels. Mainly what the church teaches and what they do. How they exist,” Burton said. “I also speak about the fallen angels.”

Because most people in the RCIA program know he is a convert, he said they ask them questions about the Church.

“A lot of them ask about Mary and about moral questions, like abortion. A lot of things that other Christian faiths don’t talk about,” Burton said. “It brings to them a better understanding.”

Mary Leath, the parish’s RCIA coordinator, said Burton’s involvement has been an asset to the RCIA program.

“He is a huge part of RCIA,” Leath said. “Ryan spends a lot of time researching. I was astounded by his presentation.”

She said Burton has embraced Catholicism and continues studying the Church.

“He is totally immersed. He’s just living it,” Leath said. “It is amazing that someone his age is so focused.”

Burton said his life has been enriched since converting and being a part of RCIA. He attends Mass at least twice a week and confession at least monthly.  His bond has strengthened with his 3-year-old daughter, Penelope, whom he brings to Mass every Sunday.

He said he feels closer to God and knows that Christ was the founder of the Church.

“It changed me a lot,” he said of his conversion. “It was culture shock. It was a different world. It changed my life. I have become a better father and husband. I concentrate more on my family.”

Click for the Love wins when faith finds its home index