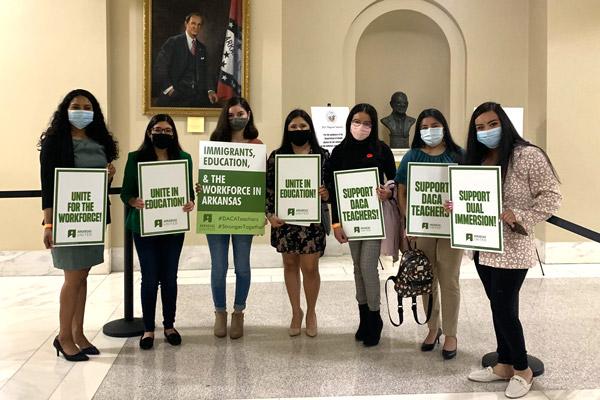 Courtesy Maria Garcia
Maria Garcia, (center) a second grade teacher with restrictions at St. Theresa School in Little Rock, stands with fellow teachers from Arkansas United, an immigrant advocacy organization, before testifying regarding HB1594 for the House Education Committee March 11. The bill, which passed to become Act 513, allows DACA recipients to be eligible for teaching licenses.

Courtesy Maria Garcia
Maria Garcia, (center) a second grade teacher with restrictions at St. Theresa School in Little Rock, stands with fellow teachers from Arkansas United, an immigrant advocacy organization, before testifying regarding HB1594 for the House Education Committee March 11. The bill, which passed to become Act 513, allows DACA recipients to be eligible for teaching licenses.

Click here to read the Diocese of Little Rock statement regarding the SAFE Act.

Catholics can celebrate several new laws that came out of the 2021 Arkansas General Assembly, most notably an abortion ban meant to trigger the U.S. Supreme Court to look at Roe vs. Wade.

“We pray for the end of abortion, and we support this effort to end it,” said Diocese of Little Rock Respect Life director Catherine Phillips said of the abortion ban, Act 308. “Of course, we pray that the Supreme Court will overturn the very terrible Roe vs. Wade decision. We have to make abortion not only illegal, but unthinkable everywhere. We have a lot of work to do to support women, men and families that they think their only choice is abortion.”

The 93rd Arkansas General Assembly of the state legislature is scheduled to adjourn April 30.

Act 308, formerly SB6, bans most abortions in Arkansas except to preserve the health and life of the mother. An amendment continues to allow abortions for rape and incest. The diocese did not agree with the amendment, with Phillips saying “we support life-affirming care in the most horrible of situations.”

“If a women does suffer the violence of rape, which is horrible in itself, she needs physical, spiritual, emotional care. And even long-term care. There are things that can be done to possibly make sure that she doesn’t have a pregnancy as a result of that. If conception has not occurred, it’s perfectly permissible to make sure the conception doesn’t happen,” Phillips said, adding of the sin of incest, “When the bonds of family are so broken that that tragedy occurs, the situation requires special care and the last thing Catholics support is forcing someone to be pregnant ... However, once that child has been conceived, forcing abortion, encouraging her to have abortion, causes more pain, more harm, more trauma than bringing the child into the world.”

The act has already been threatened with legal challenges from the American Civil Liberties Union.

Arkansas Right to Life’s “The Right to Know and See Act,” now Act 498, also passed, requiring an abortion provider to display an ultrasound image for the mother and a physician or technician to explain what the ultrasound shows, including fetal development markers like the existence of organs.

“We are just a handful of states that have passed that” legislation, said Rose Mimms, executive director of Arkansas Right to Life. “To give the woman the ability not only to see, but to know and hear of the development of her unborn child before she makes that life-or-death decision of an abortion is critical.”

In what was said to be an effort to reduce abortions in the state, the legislature passed a law allowing pharmacists to give out contraceptivesto women 18 and older without a prescription. The diocese opposed the bill.

“We also do not believe increased access to contraceptives will reduce abortions. We don’t even believe it will reduce unplanned pregnancies,” Phillips said.

According to data collected from 2002 to 2015 by United States Conference of Catholic Bishops, half of pregnancies that ended in abortion occurred while a woman was using contraceptives.

The bill did indicate pharmacists must disclose that birth control could cause the death of an unborn child.

“Birth control primarily prevents ovulation or to prevent the sperm from reaching the egg. If both of those don’t happen, it changes the uterine lining so implantation can’t occur,” Phillips said. “Catholics are not afraid or ashamed to take a stance against it. The Church has never promoted or accepted it, it has always rejected the use of contraceptives. That’s not to say married couples can’t cooperate with God’s plans to space out their births” with Natural Family Planning.

HB1195, now Act 90, known as “Every Mom Matters Act” passed, stating an abortion provider must inform and provide women with information to reach the Life Choices Lifeline operated by the Arkansas Department of Health, which connects women to social services and prenatal care.

SB289, now Act 462, allows a health care provider to refuse to perform a medical procedure that violates their religious or moral beliefs. While civil rights activists say it could result in services being denied to LGBTQ people, emergency care is still required. Arkansas already allows medical professionals to refuse to participate in abortions.

“It’s important to remember this is procedure-based, not person-based. It’s been criticized for not allowing health care to gay people or trans people,” said Father Jason Tyler, diocesan bioethcist. “As Catholics, if a gay person or a trans person comes into a hospital or a Catholic hospital and wants to be treated for diabetes or a broken arm or whatever, we would certainly do that. We don’t distinguish between one sexual identity or another.”

Father Tyler said the legislation was not something the Church was “pushing for,” as Catholic hospitals long have had ethical standards that define what procedures may be performed. For example, a Catholic hospital would not perform an abortion, gender reassignment surgery, a vasectomy or tubal ligation.

A direct result of the COVID-19 pandemic, Act 311, “No Patient Left Alone,” allows patients to have a designated person to visit in hospitals, clinics and long-term care facilities, making sure patients do not have to die or face a procedure alone.

“I admire our public servants for working so hard to do something that is right and good and upheld the dignity of patients, (and) of their families and caregivers,” Phillips said.

Arkansas joined 36 other states to enact “Stand Your Ground” legislation, Act 250. It removed language from the criminal code requiring a person to retreat if possible before using deadly force in self-defense. Statistics have shown laws like this in other states have led to more gun homicides and racial bias. Pax Christi Little Rock did not support this bill.

“Now there’s not a legal reason to think twice before shooting, before reacting,” said Sherry Simon, president of Pax Christi Little Rock, a Catholic peace and social justice group. “Pax Christi absolutely is against anything that makes violence easier to commit in this world and this definitely makes it easier to commit.”

The legislature debated a variety of hate crimes bills during the session, heavily pushed by Gov. Asa Hutchinson, as Arkansas is one of just three states without stronger punishments for crimes motivated by a person’s race, gender or religious affiliation.

SB622, which advanced to the Senate April 5, does not go as far as other proposed hate-crime bills, like the failed SB3 or HB1020, which would have enhanced sentencing for crimes motivated by a victim’s “race, color, religion, ethnicity, ancestry, national origin, homelessness, gender identity, sexual orientation, sex, disability or service in United States Armed Forces.”

Dubbed a “class-protection” bill, it focuses instead on allowing prosecutors to limit parole eligibility and longer prison sentences for offenders who target victims on “mental, physical, biological, cultural, political or religious beliefs or characteristics,” according to the bill.

“It is so watered down. The language to me is actually disrespectful to the groups at the other end of these hate crimes,” Simon said, noting that it is no longer referred to as a “hate crimes” bill.

“Pax Christi is all about restorative versus retributive justice. Restoring the dignity to the victim of the crime; we’re much less concerned about the punitive aspect of that. A hate bill goes a little way toward that,” Simon said. “When you can’t even name the victim, you surely aren’t going to restore anything that was taken from them,” referring to a person’s race or identity.

The bill passed in the House and Senate and was sent to Gov. Hutchinson April 12.

In a win for “Dreamers,” HB1594, now Act 513, allows the State Education Department to grant teaching licenses to DACA recipients who have completed the requirements to teach in Arkansas. Three years ago, the legislature passed Act 837, which gave DACA-recipient nursing graduates eligibility to obtain a license to practice in the state.

Maria Garcia, a second-grade teacher with restrictions at St. Theresa School in Little Rock, testified March 11 in front of the House Education Committee in support of the bill, which directly impacted her life. She earned an associate’s degree in elementary education but did not continue her studies as she learned she could not receive a teaching license at the time because of her immigration status. Garcia, 23, has lived in the United States since she was 5 years old.

“For me, it just means change is happening, the community is together, and I’m fighting for equal rights as best as we can and being a role model to my students,” Garcia said. “We were literally talking about equal rights the day before I was going to go in to (testify).”

It will be a few years before she can afford to return to college to earn her bachelor’s degree, adding, “Deep down I’m hurt. I just wish this would have been done during my time (in college) … I’m happy this will be allowed for others and that I did something to help that.”

The failed HB1371, a school choice voucher bill, would have allowed scholarship funding capped at $4 million with state income tax dollars to allow low-income students, students in foster care or military families and students with disabilities to attend a private school. It would have created 571 scholarships valued at $7,000 each, according to an Arkansas Democrat-Gazette article.

Click here to read the Diocese of Little Rock statement regarding the SAFE Act.