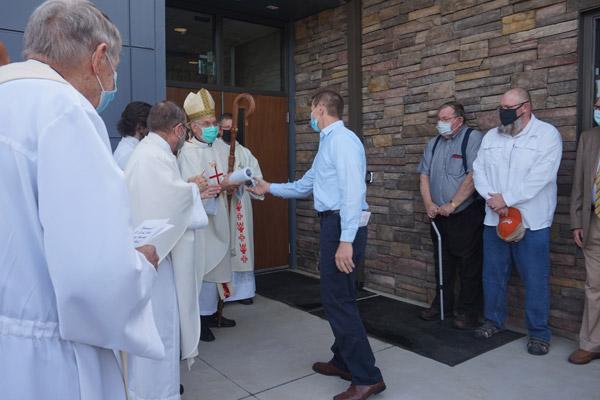 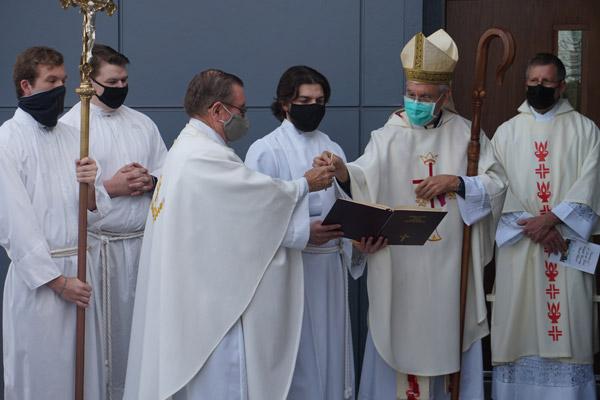 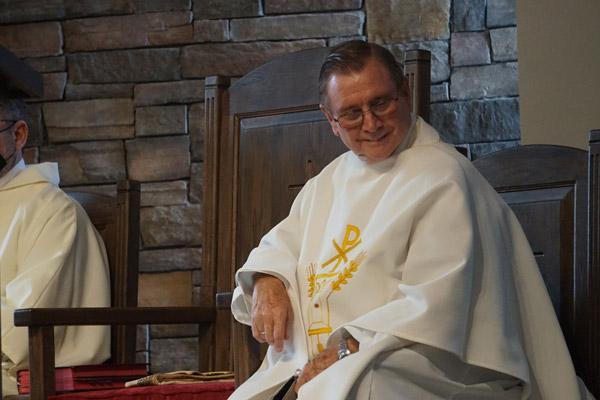 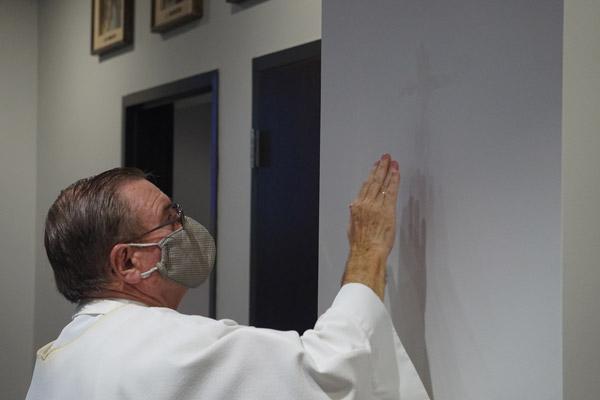 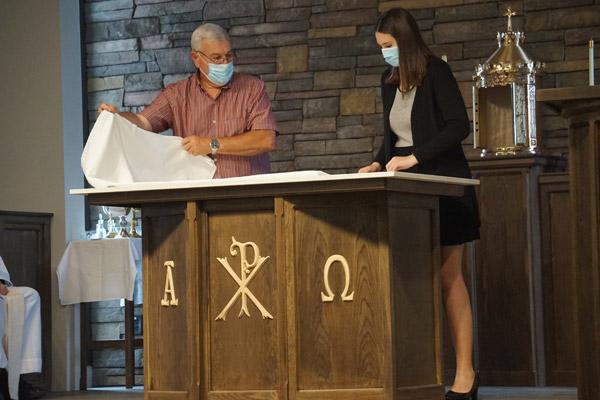 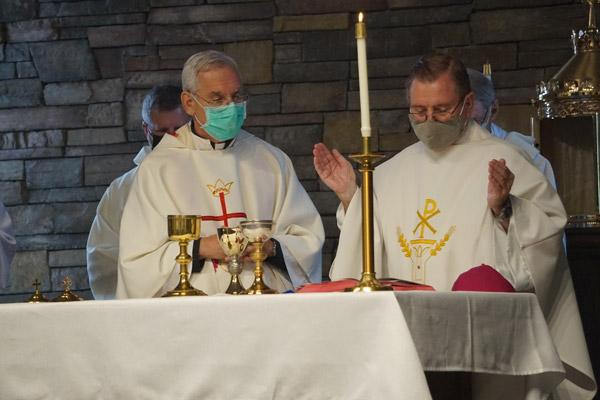 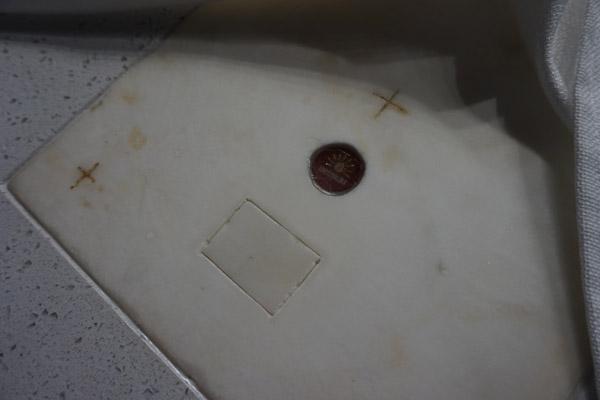 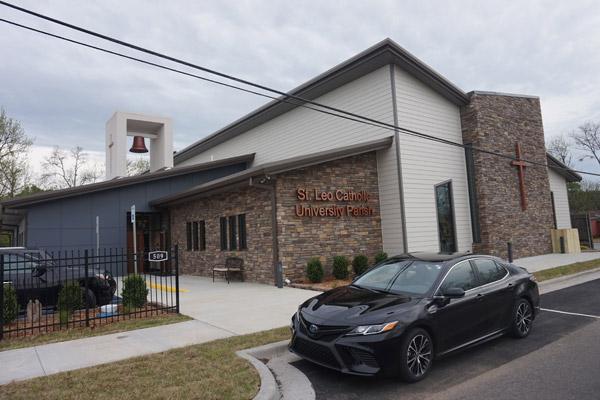 Campus minister and pastor grateful for project in Russellville 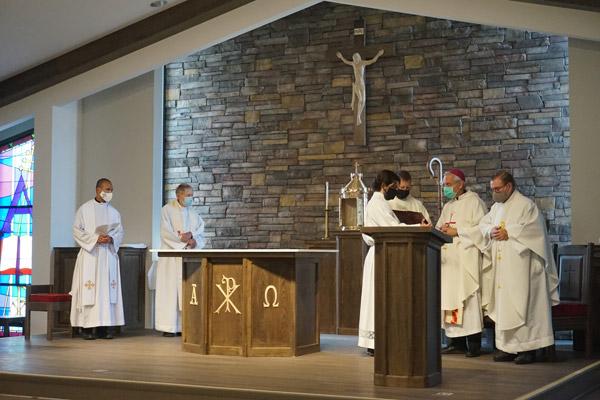 Aprille Hanson Spivey
Seminarian Colton Ketter holds the missal as Bishop Anthony B. Taylor celebrates the dedication Mass at St. Leo the Great University Parish at the Arkansas Tech campus in Russellville. Pastor Father Ernie Hardesty (right) concelebrated Mass, along with Fathers Jerome Kodell and Mauricio Carrasco, with Deacon Mark Verkamp serving. After a $3 million capital campaign that has been several years in the making, students have a new 9,000-square-foot sanctuary and ministry center.

Aprille Hanson Spivey
Seminarian Colton Ketter holds the missal as Bishop Anthony B. Taylor celebrates the dedication Mass at St. Leo the Great University Parish at the Arkansas Tech campus in Russellville. Pastor Father Ernie Hardesty (right) concelebrated Mass, along with Fathers Jerome Kodell and Mauricio Carrasco, with Deacon Mark Verkamp serving. After a $3 million capital campaign that has been several years in the making, students have a new 9,000-square-foot sanctuary and ministry center.

RUSSELLVILLE -- Pat Buford’s eyes filled with tears in a room off the sanctuary of the new home of St. Leo the Great University Parish at Arkansas Tech University in Russellville before dedication of the church April 14.

As the director of college campus ministry and parish for 25 years along with Father Ernie Hardesty, they saw their dream come to fruition at the end of March, when construction was completed on a 9,000-square-foot campus ministry center. It’s a far cry from the 1,400- square-foot house where the ministry was based since 1996 to help college students form their faith as adults.

“We call it the miracle on L Street,” Buford said of the new church, located at 509 West L Street.

Bishop Anthony B. Taylor dedicated the church with an intimate Mass of students, donors and committee members who helped the $3 million project move forward. The Mass was concelebrated by Father Hardesty, Father Jerome Kodell, OSB, and Father Mauricio Carrasco of Russellville. Bishop Taylor will return June 12 to celebrate Mass and bless the building for a larger celebration with students, coinciding with alumni weekend.

Development coordinator Mary Corkins, who led the project with Father Hardesty, said they raised the full $3 million for the building, which seats 150 in the sanctuary and 150 in the cafeteria. It also has a large commercial kitchen.

HFA in Bentonville was the architect and Nabholz Construction of Conway was the contractor. The demolition process started a little more than a year ago, and while the pandemic did not slow construction, some city concerns about utilities delayed the building past its projected completion date of December 2020. They have started a $1 million campaign to raise money for the furnishings and liturgical items, raising a quarter of that so far.

“As you can see, there's plenty of spaces that need chairs and tables and to fit this size because we still have the same furnishings for a 1,400 square-foot facility when now we’re 9,000. So we have the space now, we need to fill it with stuff so that the students can come and participate,” Corkins said, adding that it’s a surreal feeling to see it completed.

“This is going to sound so cheesy, but it's really like a dream come true. I've been a part of the ministry, my mother's the director (Pat Buford) and you know how it goes when moms are involved that means everybody's involved at that point. So, literally since she's been working here, I've been a part of St. Leo's.”

Beginning outside, Bishop Taylor was handed the keys and architectural plans, handing them then to pastor Father Hardesty, explaining how the parish was entrusted to the care of the diocese, was part of the universal Church and how he in turn entrusted the community to Father Hardesty. The Rite of Dedication of a Church and an Altar included prayers, incense, anointing the altar with sacred chrism and dressing the altar. Deacon Mark Verkamp of Charleston made all the wooden items on the altar, including the altar and ambo.

Father Hardesty anointed four corners of the inside of the sanctuary with oil, making the sign of the cross, representing the four Gospels.

“Through these outward signs our outward ritual expresses an inner reality that this is a house of God, set apart for worship, in which Jesus teaches us the divine Word,” Bishop Taylor said in his homily. “And, in which he leaves us with his body and blood. From which he then sends us forth to bring the word of God in the sacrifice of eternal life to others.”

Students participated in the Mass, including senior Brayden Rainwater, 22, who lectored, and alum Sami Chick, 22, who helped dress the altar.

“It definitely makes it a lot easier because it's bigger, and the facilities are better, so it makes meetings easier,” Rainwater said.

Chick said while she was attending school, St. Leo’s gave her friends who wanted “a closer connection to God.”

“I get to learn more about the faith from people my own age, not from a video or from, you know, some kind of boring lecture; it’s from my peers,” Chick said.

Seminarian Colton Ketter, who attended Arkansas Tech University and St. Leo for two years before entering the House of Formation, served at the Mass.

“When I came to college, I didn’t really know anybody and all I knew was there was St. Leo’s,” Ketter said. “So I came to St. Leo’s, this little shack alongside the road. I just knew that’s where I was going to hang out, and if I’m meeting new friends, that’s where they were going to be. St. Leo’s really was a home for me while I was away from home.”

The need for something new went beyond just the reality that the 50-plus-year-old house they were in was falling apart. The house did not look like a church. Buford said she remembers an international student was walking past the house and said, “He saw Father with his collar and that’s the only reason he stopped. He said, ‘I've been here a year and I didn’t even know we had a church here.’”

Father Hardesty, who oversaw the construction of St. John Newman University Parish’s church building in Jonesboro in 1992, said he’s excited to be able to celebrate weddings and baptisms in the new sanctuary, something he does often for alumni.

“People say, ‘Why do you do college ministry?’ I do it because I believe it's a calling to keep them reflecting on their faith,” Father Hardesty said. “Especially as they go forward in life and do their service to God in the world, they need to stay connected right now, to go forward to do God's work because God is calling them. Some of them don't know what their future is going to be, but God is calling them right now.”

Adam Prince: Care for the family