English teacher first said he was staying 4 days, not 38 years 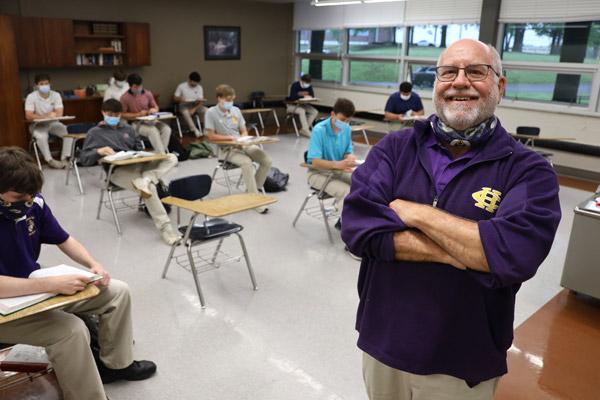 Dwain Hebda
Steve Wells kicks off another lesson in literature for a homeroom full of Catholic High seniors April 14. The CHS alum and North Little Rock native is retiring at the end of the term after nearly 40 years in the classroom.

Dwain Hebda
Steve Wells kicks off another lesson in literature for a homeroom full of Catholic High seniors April 14. The CHS alum and North Little Rock native is retiring at the end of the term after nearly 40 years in the classroom.

Catholic schools announced seven other teachers and staff members are retiring in May. They are:

Steve Wells remembers his first day as a teacher at Catholic High School in Little Rock. The North Little Rock native had come to the painful decision not to return for his fourth year at Holy Trinity Seminary in Dallas and dropped in on his former principal Father George Tribou with the news. It was September 1983.

“Father Tribou had been very supportive of me going into the seminary, and I didn’t want him to hear through the grapevine I was not returning,” Wells recalled. “I remember walking into his office and saying, ‘Father Tribou, I just wanted to let you know I’m not going to pursue my studies for the priesthood. I wanted to tell you personally.’”

“He looked up at me and said, ‘Well, you would have been a good priest. But what is your degree?’ I said, English. And he said, ‘Great. The boys have just run off a woman teacher. Is there any way you could go up to Room 208 and teach English for the rest of this week?’”

The principal priest never sent a replacement and Wells, who’d graduated with a degree but no real idea of how to use it, found his calling.

“I took to it like a duck to water,” he said. “I loved the dynamic between teacher and student. I was lucky because having attended Catholic High, there was always give and take in the classroom, and it was fun. I approached teaching that way. I wanted kids to learn, but I wanted to have fun and I wanted them to have fun.”

Thus did a four-day assignment turn into nearly four decades. Wells will retire at the end of the school year after 38 years. He’s only taught English; the first three years to underclassmen and the remainder to juniors and seniors to polish their appreciation for writing, literature and for themselves.

“Every boy who’s been in front of me has potential they don’t realize they have,” he said. “It might not necessarily be in the classroom. Maybe they’re socially inept, and they don’t have enough confidence in themselves. Or maybe they’re really brilliant, but they don’t see the need for the basics, like how to write a great sentence. But I’ve always operated from the fact that every kid has potential. And I wanted them to try to realize that potential.”

“They come in as 14-year-olds and some of them are almost a completely different person, on the good side, when they leave. They have more confidence, they’re more friendly, they’re more outgoing, they’ve made buddies, they’re satisfied with life. That’s been the mainstay of every year, I would say.”

Wells graduated from St. Patrick School in North Little Rock where he gained, “an excellent education, just incredible,” from the Sisters of Mercy. The middle of three boys, he graduated CHS in 1973 with designs on attending the University of Southern California after his father. But when Claude Topf Wells Sr. died in Steve’s senior year of high school, he felt compelled to stick closer to home. He entered Rockhurst College in Kansas City before entering seminary.

After leaving Holy Trinity for good, he half-heartedly dabbled in the family’s business interests – banking and real estate – before his fateful meeting with Father Tribou.

From there, he traded the board room for a classroom shared with Willa Cather, Robert Frost and Harper Lee.

“I enjoyed literature that taught life lessons. Short stories, novels, poems, whatever was going to impart a little kernel of wisdom,” he said. “How to look at life, how to deal with adversity, how to celebrate triumphs where you’re not arrogant, whatever it was. That was my bailiwick.”

“I always loved the written word, so I made a point of reading to my students. I wanted them to learn the rhythms of the language and what a beautiful language English could be. And with it being a Catholic school, I wanted to impart this is not only life, but this is also morality. I was very cognizant that I was teaching at a Catholic school and always try to tie that into the lesson.”

While the world changed mightily outside, inside Wells’ classroom was a pedagogical constancy that never wavered. A self-described “technology troglodyte” he has no internet, computer or even a cell phone. When the COVID-19 pandemic hit last year, Wells was assigned two handlers to walk him through the digital classroom. The experience taught him a lot, including that his time was approaching fast.

“I am competent doing Zoom classes and everything,” he growled. “But when I see all the other teachers around me who are younger and the marvelous things they can do with computers and all the different information that’s out there, that was a hint that I need to move on.”

Wells’ planned retirement activities include indulging a long-held landscaping hobby and a lifetime obsession with the outdoors. He hopes to just fade out quietly at year’s end with no fanfare or tribute, saying he considered his investment in his students as legacy enough.

“I hope I communicated my enthusiasm for learning to them and that learning is not drudgery. It can be fun,” he said in reflection. “I hope I passed it on that life is fun too, it's exciting. Yeah, there’s bad moments, but just keep going at it. Keep going at life.”

Catholic schools announced seven other teachers and staff members are retiring in May. They are: