Ready for a road trip? Here are 507 Catholic places 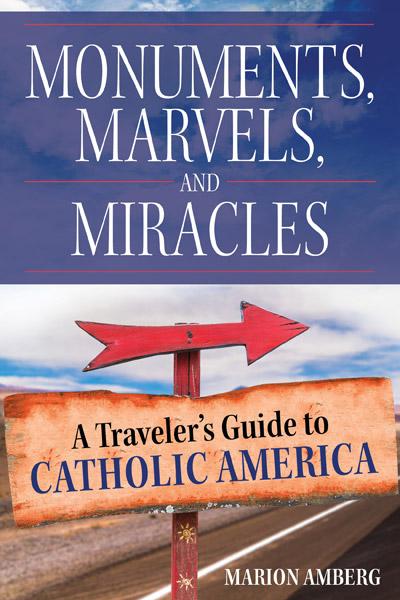 Courtesy Our Sunday Visitor
This is the cover of “Monuments, Marvels and Miracles” by Marion Amberg.

Courtesy Our Sunday Visitor
This is the cover of “Monuments, Marvels and Miracles” by Marion Amberg.

Author Marion Amberg has one prevailing message for readers of her newly published book, “Monuments, Marvels and Miracles: A Traveler’s Guide to Catholic America”: Go out and explore.

“It represents the Catholic faith of America,” Amberg told Arkansas Catholic about her 480-page book highlighting 507 spots, including all 50 states, that touch on an area of Catholicism; everything from unique architecture to shrines where a miracle has taken place. “There are these little gems all over the place. Go out and explore. Sometimes it’s just one little thing that will inspire people. One little thing that might just lift them out of whatever problem they might be experiencing. God is there, everywhere, but sometimes we need him in places we have never been because we're not taking that particular place for granted.”

The idea for this third book for Minnesota native Amberg, a freelance journalist who lives in Santa Fe, came to her several years ago.

“‘If I had to write on one thing for the rest of my life what would it be?’ I kind of told myself chapels, churches, shrines, that kind of thing. I don’t know where that idea came from, but that idea stuck in my head,” she said.

While a publishing deal looked promising in 2017, the publisher discontinued its trade books. But despite her initial disappointment, God had other plans. In 2018, Catholic publishing company Our Sunday Visitor, which also prints a national weekly newspaper of the same name, “grabbed it,” Amberg said.

Though she has visited many of the locations she wrote about, broken down by state in easy-to-read nuggets of information, she spent 13 months mostly researching online, making calls and writing, while also managing a part-time job.

“I typically get up at 2 o'clock in the morning, get coffee, and I start banging away at the keyboard. The internal editor in my brain is dead to the world so it doesn’t say, ‘Oh that’s rubbish,’” giving her the freedom to be more expressive, she said.

The book was originally scheduled for release March 30, 2020 -- the worst possible time to release a travel book, at the height of the COVID-19 pandemic when many states were on lockdown, churches were closing and people were staying home. Now, with vaccines being administered and more places opening, “people are raring to go,” she said.

In Arkansas, the book points to St. Elizabeth Church in Eureka Springs’ unique bell tower entrance and the Cathedral’s bell that was once used as Little Rock’s telegraphic fire alarm system. St. Boniface was chosen because of a 2008 hail storm.

“A lot of these places have stories of being spared from storms, some kind of divine providence. At St. Boniface, it was a sign. There was a huge hail storm that came on Fort Smith, that just pounded the daylights out of the city, but a brand new sign advertising St. Boniface Church didn’t suffer a dent,” she said. Amberg provokes the reader to contemplate more about these locations, like for St. Boniface, “What do the seven symbols in Boniface’s martyrdom window represent?”

She points out the raven imagery used at Subiaco Abbey, the historical murals by artist Fridolin Fuchs within the sanctuary at St. Mary in Altus and the lighting at St. Mary in Helena, representing the light and darkness of the world.

Five days after the book’s April 14 release, it had already gone to a second printing.

“When people say congratulations, I always go, ‘All glory to God’ because I did not give myself this idea. And our ability to write, we didn’t give that to ourselves. I’m just happy it came together,” Amberg said.

Her own faith has been strengthened through her research, most notably through Marian miracles and the rosary. She uncovered parishes in Texas, Kansas, Alabama, Nebraska and others that prayed the rosary daily for the safety of their men who were sent to war, and all returned safely.

“That struck me very, very deeply. Hardly a day goes by I’m not praying the rosary,” Amberg said. “You hear the phrase ‘the power of the rosary,’ but when you come across something historial like this, you take it more deeply.”

Amberg is now working on a sequel that will look at Marian sites with miraculous circumstances, likely to be published by 2022.

Beyond visiting the Catholic sites, especially  those in their own backyard, Amberg hopes her readers connect with the history of Catholicism to stir their faith.

“I think it’s time for the American Catholics to stand up and look around and see the rich heritage we have and take pride in it,” she said.

The book is available for $27.95 through orderosv.com, Amazon.com and at Catholic bookstores.