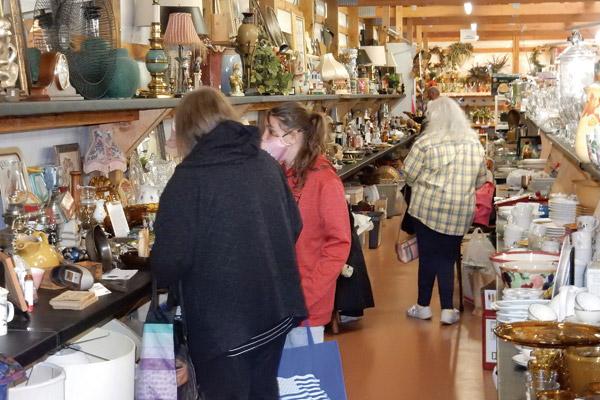 James Keary
Shoppers make their selections in the household section during their shopping appointment at the Knights of Columbus Council 6419 rummage sale in Hot Springs April 24.

James Keary
Shoppers make their selections in the household section during their shopping appointment at the Knights of Columbus Council 6419 rummage sale in Hot Springs April 24.

HOT SPRINGS – The pandemic inspired parishes to think about fundraising in new ways. In Hot Springs, Jim Lockwood had three buildings filled with furniture and household items ready for the Knights of Columbus spring rummage sale in March 2020.

Then COVID-19 hit and he had to cancel the sale.

Money raised by the rummage sales, normally held every year in March and October, helps fund nine Hot Springs charities. Sales could not be held because of restrictions from the Arkansas Department of Health and the Diocese of Little Rock.

Lockwood, event chairman and a parishioner at St. John the Baptist Church, didn’t know how long it would be before he could reopen his doors. He continued to accept donations of furniture, appliances and household items, but he was quickly running out of space in the two buildings next to the Knights of Columbus hall at 3045 Spring Street.

“We continued to receive donations, and we were trying to figure out where to put it all.” Jim Lockwood, event chairman

“We were getting ready for our regular sale when we realized we had to cancel,” Lockwood said. “We had to follow the directions of both the bishop and the governor. We continued to receive donations, and we were trying to figure out where to put it all.”

“When it first hit, and people were affected by the lockdowns, people were spending more time at home cleaning out their homes. They still wanted to donate to us,” said Bob Koch, chairman of the event’s charity committee and a member of St. John.

Sue Wood, a rummage sale volunteer and a member of St. John, said they received so many household items in 2020 that she has had to box them up and store them under the display counters.

“It’s harder and harder to find more space. We have had to stack it on top of each other,” she said.

Antique furniture, living room, bedroom and dining room furniture, fine china and crystal, small appliances, games and Christmas ornaments are some of the thousands of items found at the sale.

Lockwood said few months into the pandemic they realized they could sell some of the items online, and he could make appointments to meet the buyers.

“It took a little time. I’d have to take pictures and write a description,” Lockwood said. “I would sit at home, watching TV and working on it at the same time.”

They began bringing in enough money that they were able to donate between $600 and $700 a month each to four charities that provide food to the needy, including the food pantry at St. Mary of the Springs Church, Jackson House, Salvation Army and Project Hope.

He said the other charitable organizations had to close or curtail their operations because of the pandemic.

“When we first started we had nine charities we would give to. We felt we could commit only to those charities that help to feed people,” Lockwood said.

Lockwood said selling items online was successful, and they were able to raise about $60,000 through the first part of this year, which is about the same amount raised from holding rummage sales in the past.

Because of the large number of people who attend the sale, COVID-19 restrictions forbid them from holding a rummage sale this March, so the organizers decided to open the sales floor by appointment only, Lockwood said. They are open from 9 a.m. to noon Thursdays, Fridays and Saturdays in April and May.

Lockwood said by the end of April, they had sold another $17,000 worth of merchandise.

“We have more than a dozen volunteers that have made all of this possible,” Lockwood said.

As of April 30, the Knights were uncertain whether they would be able to hold a rummage sale in October like they did in 2019.