Cole Carper seeks out action in pools, slopes and trails 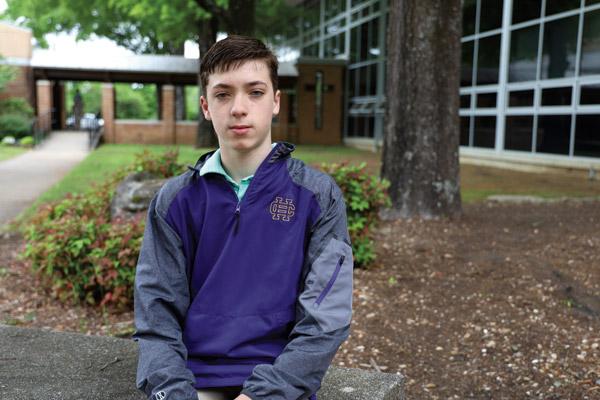 Dwain Hebda
Freshman Cole Carper reports early for classes at Catholic High School in Little Rock. The teen enjoys extreme sports such as water and snow skiing and mountain biking, despite a genetic condition that limits his eyesight.

Dwain Hebda
Freshman Cole Carper reports early for classes at Catholic High School in Little Rock. The teen enjoys extreme sports such as water and snow skiing and mountain biking, despite a genetic condition that limits his eyesight.

To the naked eye, there’s not much that distinguishes Cole Carper from the rest of his freshman peers at Catholic High School in Little Rock. The well-spoken 15-year-old weathers the hectic pace and academic rigor of high school while looking for ways to assert his independence.

He’s worn Rocket purple and gold on the school swim team and looks forward to improving over the coming three years.

“I do sprints, freestyle and I’ve also done the 500 meter a few times,” he said. “I think I did pretty well, but I know I can do better. I’m ready for next season.”

Out of the pool, Carper is a certified adrenaline junkie who likes anything fast -- black diamond ski slopes, mountain biking or water skiing on one of Arkansas’ many lakes.

In fact, Carper is about as prototypical as freshman boys come these days -- except for the fact that he does all of these things with a fraction of the sight his peers have. Born with a genetic disorder called Leber congenital amaurosis (LCA), it’s a degenerative condition passed to him via recessive genes from his parents, Ashley and Greg.

“I don’t necessarily see detail,” Carper said. “It’s really hard for me to see anything unless the contrast is pretty good. I can’t see stuff super far away or super small.”

Ashley Carper said the diagnosis was exceptionally rare when Cole was born, which is what makes the fact that both he and his older sister Caroline have it so extraordinary.

“Cole was diagnosed with LCA before she was, and his is more severe than hers,” she said. “Here’s how new this was when we first started out: We had her tested in Dallas and the doctor said, ‘Her condition is so different, we really don’t think that she has it.’ But when the tests came back, the doctor came in with tears in his eyes and said, ‘She has the same thing he has.’ They present very differently.”

Those differences are expressed in their choice of high school. Caroline thrives at the larger Little Rock Central High, while the smaller CHS environment favors Cole, despite the family not being Catholic. It was a decision that wasn’t without complications.

“Cole needs services, lots of services, probably $10,000 or $15,000 worth of equipment,” his mother said. “That was all provided at public school, so we had to find some funding to help with that to where he could attend a private school.”

Carper uses assistive technology to complete schoolwork but when it comes to his sports, his technique is strictly self-developed.

“On a ski slope, and the same with biking, I’ll usually go slow the first few times just to understand the course like the trees and stuff around it. That's a good contrast,” he said. “Don’t get me wrong, I have bumped into some signs and some ropes and fell, but it’s all good.”

He also said he has come to an understanding with his parents when it comes to his favorite pastimes, noting his parents have even been complicit in some of his sports.

“It wasn’t necessarily me talking them into letting me do stuff. It was also them saying, ‘As long as you don’t die, we’re OK with it,’” he said. “It was both me and them who got me into skiing, for instance. And, they bought me my first pair of water skis. They were like, ‘This is what you’re going to do.’ I was like, ‘OK, that’s cool.’”

“It is frightening, but that’s how I have to live, because he loves adventure,” Ashley said. “He’s got a lot of energy and if I kept [sports] from him, he would not be the boy that he is. He would not have the confidence that he does.”

After high school, Carper’s dream is to study aerospace engineering, something that feels much more attainable because he and his sister were part of a landmark clinical trial in 2014.

“I was supposed to lose all of my sight by age 25 or 30, but the gene therapy that my sister and I got put the gene that we were missing into our eyes,” he said. “It’s helped us see better, but not perfectly. I don’t know how it’s going to continue for the rest of my life, but so far my vision has been pretty stable since then.”

The procedure bolstered his spirits and gave him hope for the future, hope he’s happy to share with others facing serious life issues.

“When my sister and I got diagnosed with our condition, the doctor said there is no cure whatsoever. But then there was, and now we are lucky enough to have had it,” he said. “I would say to people, never say never.”