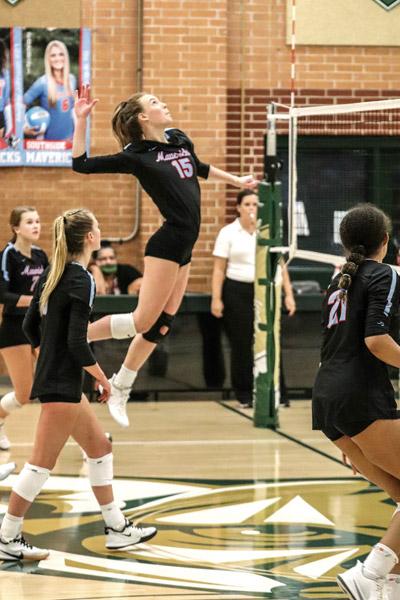 Courtesy Avery Fitzgerald
Avery Fitzgerald, 18, eyes the competition. The parishioner of Immaculate Conception Church in Fort Smith is the second member of her family to play volleyball at the college level and the first to play in the SEC.

Courtesy Avery Fitzgerald
Avery Fitzgerald, 18, eyes the competition. The parishioner of Immaculate Conception Church in Fort Smith is the second member of her family to play volleyball at the college level and the first to play in the SEC.

Fort Smith Southside senior Avery Fitzgerald sets her feet and spins the ball easily in her hands. Staring down the opposition, her everyday vivacity melts into killer instinct as she takes a steadying breath and sends the ball lightly skyward.

In a perfect combination of timing and power, the 18-year-old whipsaws her arm into and through the ball with a gunshot thwack. The ball blurs like a laser, filleting the defense and catching the back corner for an ace.

It’s a fluid choreography, one with which the state’s 6A schools are well-acquainted. Fitzgerald has been carving up the volleyball competition since she arrived at Southside, landing the Mavericks three straight conference championships and three consecutive state finals appearances.

“And every year, we lost state,” she said, in the tone of a perfectionist. “I think it was just the nerves. I don’t know. But it was amazing going to state all three years. I wouldn’t have it any other way. It was a pretty good experience.”

The answer is pure Fitzgerald, a lethal competitor wrapped in a cloak of charm and “yes-sirs.” The Fort Smith native tells her story between cloudbursts of laughter, demonstrating a comfort in her own skin that took years in the making.

“I was always the tallest girl on the team, growing up,” said the 6-footer. “I was always taller than all my classmates and I hated it, up until high school.”

Fitzgerald’s height had its advantages – besides aiding her volleyball career, she was also a star basketball player for Immaculate Conception School in Fort Smith. But at the time, it just brought unwanted attention.

“Everyone made fun of me at I.C. for being so tall. I was like, ugh,” she said. “I mean, when I was at I.C., I heard that coffee stunts your growth, so I would chug coffee to try and stunt my growth.”

Fitzgerald coped with her height -- as well as everything else -- with the help of her close-knit family, all members of Immaculate Conception Church.

“I.C. was the best family atmosphere I’ve ever been in,” she said. “My grandma (Sharon Blentlinger) is principal there. She’s an amazing woman. I love her. My sisters are a big part of my life. When I’m not playing volleyball, I’m usually just hanging out with family. That’s my main thing.”

“I grew up in the gym, watching them practice and going to tournaments with them. Volleyball always looked so fun to me,” she said. “I was like, ‘I’ll try it.’”

Starting at age 9, she wasn’t a natural at the game, especially compared to basketball and Chloe, who would go on to play at the Division II level. But by the time she graduated from I.C., Avery had committed herself to volleyball, dominating both her public junior high school and her traveling club teams. Her first college recruiting call came in eighth grade.

“The first college to ever look at me was LSU (Louisiana State University). I went to their camp my eighth-grade summer, going into ninth grade,” she said. “That was my first camp and once one college sees you, the others just kind of follow.”

Those who had Fitzgerald on their radar were in for a treat. She hit the weight room to get stronger and developed a vertical leap that now enables her to touch 10 feet 2 inches. She improved so much between ninth and 10th grade that Mississippi State had seen enough and locked up the high-flying Fitzgerald on a volleyball scholarship.

“I was talking to a lot of other schools and Mississippi State gave me a timeline,” she said. “They said that I had to commit by this time, or they were just going to give it to someone else. So, I just decided to commit there.”

“Another thing, they have a huge family atmosphere there. They’re all so close, and that’s what I really need in a school. The coaches are amazing; they talked to me and helped me through being so nervous about coming to college. I visited different schools up north and some of them were just rude. I was like, I can’t just go to school like that.”

The Bulldogs’ instincts were spot on as Fitzgerald racked up one prestigious honor after another. Among them, three-time all conference, all state, all-state tournament and all Arkansas Preps as well as three Gatorade Player of the Year nominations. She made the Under Armor Watch List, was ranked top player by MaxPreps and was just named All Region 4 by the American Volleyball Coaches Association. To say no one is ridiculing her height now is an understatement.

Fitzgerald hasn’t let the accolades go to her head. Even with college reporting day approaching in July, she’s still the same homebody, happiest when invested in life’s simple joys.

“Like, literally, my whole life revolves around volleyball and if I’m not playing volleyball, I’m somewhere with my family,” she said. “Coming from a Catholic school I have a strong faith, too. That’s huge to me. I still pray before every game. I know God is on my side.”